Before the Brussels summit: Erdogan is unaffected by threats of sanctions... 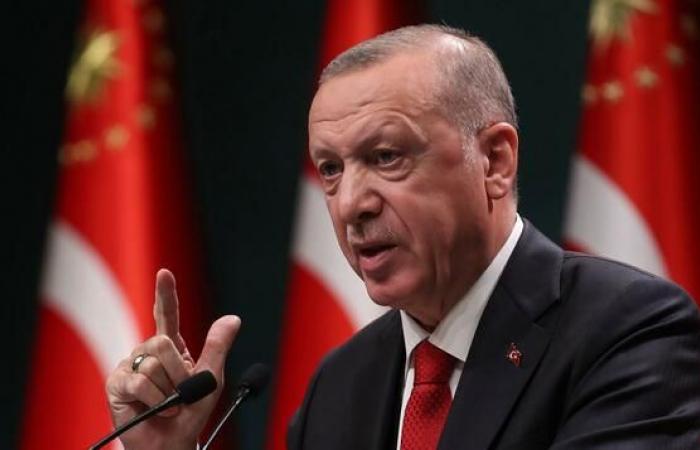 With its aggressive foreign policy, Turkey has so offended its western partners in Europe and America that it is now threatened with sanctions from both the EU and the USA. The EU wants to decide on sanctions against Turkey over the gas dispute in the eastern Mediterranean on Thursday and Friday. The US Congress demands that the outgoing President Donald Trump should punish Ankara for purchasing a Russian air defense system.

Nevertheless, the Turkish head of state Recep Tayyip Erdogan is unimpressed. He insists that Europe and America do not want to anger Turkey because it is too important geostrategically. That could prove to be a misjudgment, say some experts.

Erdogan sees his country as a regional power that does not have to be drawn in by Europe or America. Turkey is fighting with the EU countries Greece and Cyprus over the drawing of borders and gas supplies in the Eastern Mediterranean. Erdogan is at odds with the United States, among other things because of American support for a Kurdish militia in Syria. The Turkish involvement in the Caucasus and Libya has also met with criticism in the West.

NATO accuses Turkey of weakening the alliance’s integrated air defense by purchasing the Russian S-400 air defense system. US Secretary of State Michael Pompeo sharply criticized the Turkish stance at a NATO meeting a few days ago, saying that Ankara had given Russia a “gift”. Relations between the USA and Greece, on the other hand, are better than they have been for a long time.

The preparations for the upcoming EU summit show how isolated Turkey is in the West. In October the German Council Presidency had enforced that sanctions against Turkey were postponed; Chancellor Angela Merkel wanted to settle the gas dispute with Ankara through negotiations. But the German project failed. EU Council President Charles Michel has now said that the “cat and mouse game” with Turkey must come to an end.

Greece and Cyprus are demanding economic sanctions against Turkey, which media reports suggest could hit the Turkish tourism industry, one of the country’s main foreign exchange earners. Sanctions against the Turkish energy sector, the banking industry and the transport sector are also possible. Harsh EU sanctions would be devastating for the Turkish economy, which is already ailing. Erdogan had therefore made a commitment to the European future of Turkey in the past few weeks and expressed readiness for reform.

Erdogan threatened to allow refugees to move to Europe again

Recently, however, the Turkish president has returned to a hard line. He recently threatened to allow refugees to move to Europe again; in the spring, Turkey temporarily waved tens of thousands of Syrians and Afghans through to the land border with Greece. “The gates are opening, the IS people will come to you,” Erdogan said to Europe. “Then you see what you get out of it.” Shortly before the summit, Erdogan again attacked French President Emmanuel Macron, who supports the demand for sanctions against Turkey. He hoped France would get rid of Macron as soon as possible, Erdogan said.

Ankara takes American threats of sanctions more seriously than the EU’s possible steps. After the US Congress called for penalties for Turkey because of the S-400, Turkish Foreign Minister Mevlüt Cavusoglu said problems should be solved through dialogue rather than threats and sanctions. Two years ago, Trump used sanctions to enforce the release of an American pastor imprisoned in Turkey and crash the Turkish lira.

Closer ties between the EU and the US could harm Turkey

In the dispute over the S-400, Erdogan’s government has so far assumed that the US wants to prevent Turkey from drifting further away from the West, even if Trump’s designated successor Joe Biden is more critical of the Erdogan regime than the outgoing government in Washington. Ankara may feel too safe in this regard, says the American Turkey expert Ian Lesser. The US could live without a functioning relationship with Turkey, Lesser said in an online forum run by the think tank Crisis Response Council.

Closer relations between the EU and the new US administration could also have negative consequences for Turkey. Federal Foreign Minister Heiko Maas told “Spiegel” that Europe and America had to work closer strategically again: “We must not leave a vacuum again, as in Libya or Syria, for example, which is then filled by others, by Russia or Turkey.”

These were the details of the news Before the Brussels summit: Erdogan is unaffected by threats of sanctions... for this day. We hope that we have succeeded by giving you the full details and information. To follow all our news, you can subscribe to the alerts system or to one of our different systems to provide you with all that is new.