Case of the dismissed ex-police officer Wahiba Kharchich: details from the central director of 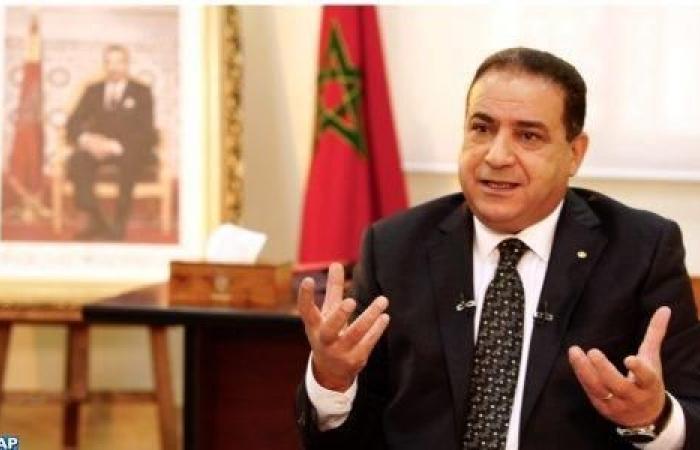 The case of the former police officer, Wahiba Kharchich, relating to allegations of sexual harassment, has passed all the judicial stages, affirmed the central director of the judicial police, Mr. Mohamed Dkhissi.

The dismissed ex-officer spoke of the sexual harassment case against Aziz Boumehdi, head of prefectural security in 2016, when she was heard about her complaint against several police officers, the head of the district and his elements, in addition to members of the communication cell of the city of El Jadida, in addition to a complaint against a neighbor whom she accuses of sexual harassment and attempted rape, recalled Mr. Dkhissi, in an interview with M24 , the MAP TV channel.

He specified, in this context, that Wahiba Kharchich, who joined the ranks of the national security in 2003, requested in 2016 an audience with the head of the prefectural security, Aziz Boumehdi, who received him in the presence of officials. administrative staff and listened to his complaint.

The security manager recalled that the ex-officer was the subject, during the period of his internship, of several warning remarks following the violation of the rules of discipline and was warned about the respect of his colleagues and educational and training executives, before receiving a warning in 2014 after assaulting a colleague on a mission, in the Azemmour police district.

After having undertaken all the legal and administrative procedures required in this case, the administrative service of the city of El Jadida sent its conclusions to the General Directorate of National Security, before the General Inspectorate went online listening the person concerned, said Mr. Dkhissi.

The case of sexual harassment, which she claims to date back to 2014, he added, was submitted to the director general of national security and to the administrative police directorate, because it only concerns the administrative aspect. which the General Inspectorate is responsible for, but it also took on the aspect of an offense.

Mr. Dkhissi said that the written instructions he received from the director of national security indicate that the law must be applied, spared no one and go to the end. And with that, he asked the National Brigade of the Judicial Police to open an investigation after having informed the competent prosecutor’s office and listened to all parties, in accordance with the law.

The King’s Attorney General, he said, ordered the officer to listen, before the judicial police report was submitted to the King’s prosecutor, who listened to the head of prefectural security, Aziz Boumehdi, because the Attorney General is considered a senior officer of the judicial police. He thus decided to initiate the prosecution and referred the security manager to the investigating judge who listened to him in turn and at the end of the investigation, decided not to prosecute.

The comptroller general and head of the prefectural security of El Jadida, Aziz Boumehdi, who did not enjoy any privilege in this case, called on the services of two lawyers without any intervention from the administration and c he himself paid the two masters, as confirmed by the check for the amounts of the fees signed by him, he continued.

Regarding the allegations relating to the non-listening of witnesses, Mr. Dkhissi indicated that the instructions said that the suspended officer should be heard alone and all the procedures were applied by the public prosecutor and the judge of instruction.

He added that the investigating judge listened to the night guard and underlined in his investigation that he was not present at the place where the applicant claims to have been the subject of sexual harassment, while the witness that she says, that he has been threatened, is a convict with multiple criminal records (drug trafficking, running a brothel, incitement to debauchery, swindling) who did not appear before the judge instruction.

Regarding his servant, who had testified in a similar case, she did not appear before the examining magistrate and as for the individual who published a video in which he claims that he was offered bribes. wine, nobody prevented him, indicated Mr. Dkhissi, who recalled that there is in Morocco a direct line with the presidency of the public ministry which makes it possible to communicate with it to arrest the corrupted person in flagrante delicto.

Regarding the allegations that the prefect in question enjoys privileges, Mr. Dkhissi stressed that these assertions are false, insofar as he did not enjoy any privilege and he was treated like all citizens within the framework of of the rule of law, adding that the statements according to which he is the son-in-law of the Director General of National Security are also devoid of truth.

“When a person wants to bring up a subject, he must be objective and tell the whole truth and not a quarter or a half of the truth or the truth that suits him, to thus mislead public opinion “, he said.

In the same context, Mr. Dkhissi clarified that following the examination of the video in which the suspended officer claims to have been threatened with the kidnapping of his daughter, near the Casa-Port station, while she was going to court for a case, it appears that these facts are supposed to have taken place in Casablanca and here, any ordinary citizen who has lost his way can turn to the police officers present on the spot to ask for directions and if necessary, denounce the two individuals who threaten him, thus leading to their arrest.

“Here I am speaking of the ordinary citizen and not of a police officer who has a perfect knowledge of the measures and procedures”, he continued, adding that even if this turns out to be difficult, there is always the possibility of ” call 19 and present themselves as a police officer facing threats, especially since the judicial police are on site and patrol the avenues, in addition to the district police with territorial jurisdiction, while she says she went from Casablanca to El Jadida and was received by the Deputy Attorney General, before going into a hysterical state, fainting and being transferred to hospital.

After receiving correspondence from the public prosecutor’s office, continued Mr. Dkhissi, she was contacted and summoned by the judicial police appointed by the King’s Attorney General, but she indicated that she was in a state which did not allow her to be present. before Monday, or after four or five days. On Monday, she refused to make any statement on the pretext that she was taking drugs that could affect her, noting that she could not make any statement until her complete recovery, to which the judicial police did not report. not opposed.

Then, he underlined, the person concerned presented a medical certificate of 21 days, a second of 30 days then a third of 30 days, that is to say a total of 81 days after the accident and when she left. introduced and after being listened to, she claimed that her husband was receiving phone calls from anonymous people who sent her several photos, as she claimed that her phone was under surveillance and was tracking her movements in Benguerir and Marrakech.

Mr. Dkhissi said that the judicial police applied all the procedures in accordance with the instructions of the competent public prosecutor’s office, noting in this regard that the examination of his telephone number revealed, through geolocation, that he did not never been to Benguerir, but was moving between the cities of El Jadida and Casablanca, while she was in Morocco.

In addition, all legal and technical procedures concerning this complaint were completed before being submitted to the Attorney General, he said.

In connection with her statement before the judicial police officer who questioned her about the two people she claims to have threatened her, Mr. Dkhissi said that she did not retain anything from their description, which is abnormal coming from a police officer, even less from an official in charge of a cell for victims of violence, knowing that those who work in these cells benefit from a capacity for listening, observation and precision and do not neglect any detail. It is therefore not normal for an officer to claim that she was the victim of a threat from two people in front of the train station at 12 p.m. or 1 p.m., without remembering either their description or what distinguished them.

Regarding the professional career of the person concerned, Mr. Dkhissi said that in 2017, she benefited from 300 days of leave by presenting medical certificates and that she made 4 work stoppages during the year 2019 .

With regard to the ban on leaving the territory, it was on the order of the Attorney General of the King pending the end of the preliminary investigation, given that the officer concerned was suspected of being involved in the participation in the forgery and the use of forgery, explained Mr. Dkhissi, adding that she left Morocco clandestinely and illegally when a thorough investigation was being carried out.

Regarding the video and the questions it raises about the inaction of the general prosecutor’s office or the non-intervention of the national security, Mr. Dkhissi said that, contrary to what is conveyed, the prosecution gave instructions to the judicial police to conduct a detailed investigation into this video and initiate all legal proceedings in this regard.

Mr. Dkhissi also referred to another case related to the attack on institutions, defamation and insulting of public officials during the performance of their missions and contempt of an organized structure, noting that the DGSN has filed a national complaint against all persons with links to this issue, while a complaint against these persons will be filed abroad.

“It is unacceptable to give free rein to defamation and insults, animated by hatred, against constitutional institutions.” The right to criticism is guaranteed, provided that it is objective and that the whole truth is told, concluded the central director of the Judicial Police.

These were the details of the news Case of the dismissed ex-police officer Wahiba Kharchich: details from the central director of for this day. We hope that we have succeeded by giving you the full details and information. To follow all our news, you can subscribe to the alerts system or to one of our different systems to provide you with all that is new.