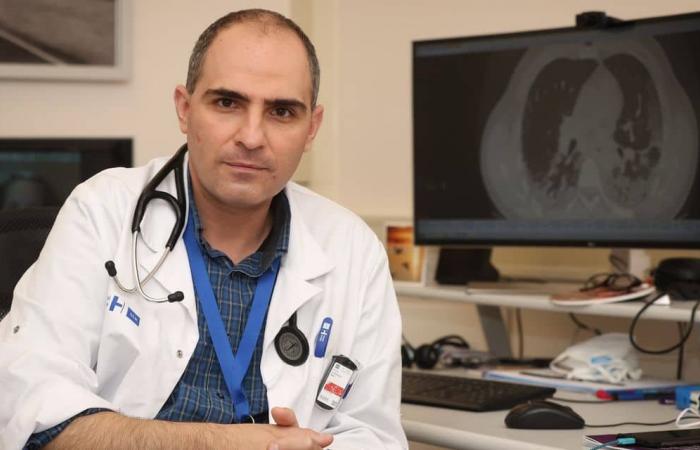 Mike El-Mourad celebrated his 40th birthday two days after coming out of a black hole where he almost died several times. It is one of the most serious and earliest cases of covid in Belgium. During 24 days of intubated coma in intensive care, he lost 24kg, going down to 59 kilos for 1.78m. He contracted the virus at the end of February, when the whole world was not yet aware of what was to come …

On March 6, this cardiologist and director of the Interventional Cardiology Clinic at Hôpital Erasme examines a patient who returned from his February vacation in Italy with a colleague. This one will declare light and not dangerous symptoms, the doctor El-Mourad him, athletic, in good health, never sick, will see his life changed forever.

A week after, “I get chills in my car as I drive home. At home I take my temperature, 39.5 fever. This can happen to me when I work long days with guards but as a precaution, I put on a mask when I get home“. This is undoubtedly what will save his wife and his little daughter from contamination. From there, the doctor’s temperature will not come down again: 39, 40, 41 °, the Dafalgan do nothing. At the time, the rule if you didn’t have breathing problems was to stay at home for 14 days. But at worst, Mike El-Mourad called an ambulance on March 11, telling them that he suspected a covid He sees nurses he knows, in “lunar” protective suits, coming towards him.

Supported, his temperature rises again; he can barely move from fatigue but is breathing properly, calling his relatives to tell them … “see you soon, it’s going to be fine, we don’t worryHe was immediately given antibiotic treatment and chloroquine. The latter “did nothing to reduce the symptoms and the progression of the disease.”

If he thinks he’s been through a nightmare, the cardiologist is in fact heading for hell. The fit dad who runs, who rides a bike, who loves playing with his little Léa, who has just bought a house with his wife; the doctor who passionately gives 70 hours of each week to his patients in the hospital, this man is nailed to a bed, being able to hardly move because his fatigue is overwhelming.

Transferred to the hospital in Ixelles, in 1 hour his situation suddenly worsened: “I suddenly can’t breathe: my lungs are affected, so inflamed (more than 80% will he see later on the radio below, Editor’s note) that I must intubate after giving me maximum oxygen. Lying down, I’m suffocating“It is March 15, Belgium is at the dawn of its first confinement.

His colleagues repatriate him to Erasmus. He will stay there for 24 days intubated with two very hard episodes of resuscitation. “24 tunnel days, saw nothing, no white tunnel, heard nothing, a total black hole“Says the doctor again. When we finally wake him from a coma, he thinks he is” gone “for two or three days. On his bed, intubated, fed by tube, he will have lost 24 kg of muscles in three weeks. can no longer raise his arms, no longer eat, no longer drink, no longer do anything alone. “The physiotherapist tells me that we are going to strengthen all this but when she asks me if I feel my feet and that I do not feel anything at all, then I tell myself that the problems are starting. In fact, I had all the possible consequences“, sums up the doctor flatly. His nerves were badly affected and he had numerous embolisms which explain his condition. At the time, we did not give cortisone or epamine against the pulmonary bubbles,”we didn’t know anything“.

But somehow, he believes in it. It is gently “perked up” by feeding it through a nasogastric tube and then by parenteral nutrition (through the blood system) for 1 month. His colleagues supported him, the cardiologist managed to walk again with orthotics thanks to extensive rehabilitation. Almost 8 months after the end of his coma, Doctor El-Mourad resumed his half-time consultations, he is exhausted but too bad, that’s what he needs. He continues at the rate of 9 hours / week of physiotherapy to make small progress. Some of his patients “cried when they saw him come back and [s]our agenda is already full ”.

In his office still some confetti which date from his return in consultation: colleagues and nurses had reserved a welcome to him with their hearts.

Enrolled as a volunteer in a Franco-American genetic study on covid, it is suspected that he is part of the 5% of humans with a genetic mutation that allows the virus to become overpowered.

Let’s wait for the vaccine!

He wanted to testify in memory of the other doctors who did not have the chance to survive like him but especially because Christmas is approaching, he feels that people have had enough, that they only want to find each other. But “It is better not to celebrate one Christmas once than to celebrate the next Christmases in the absence of a loved one, decimated by the covid“We cannot know who will be severely affected.

Doctor El-Mourad can no longer drive, he takes 45 minutes to take a seated shower, sport is only a distant memory, chronic pain constantly appears, he does not know if he will be able to recover the validity total of his left foot but he moves forward, willing.

And happy to be alive, “I am a miracle“, Doctor El-Mourad admits not having yet succeeded in projecting himself into a great project after hell. Too much pain, too much fatigue from day to day … He is moving step by step and today , you have to see him walk with a determined and rapid step “I was so frustrated that I wasn’t moving fast enough, so I went overboard“. And smile, smile, behind and without his mask.

He wrote a two-page letter to the caregivers who saved him: “To know someone close, to see him in a coma and to treat him, to return to his physical, family intimacy … it’s very hard, the difficulty comes from the emotions that it generates, I put them to the test!“.

He knows he is going to return to life from now on, but he will never forget and above all, he does not want us to forget, in this period when everyone is at the end of the line, that the covid attacks and kills. “Let’s wait for the vaccine”, which he strongly advises to do.

These were the details of the news Among the most serious cases, this cardiologist warns: “It is better once a little Christmas than to celebrate the next ones with an absence” for this day. We hope that we have succeeded by giving you the full details and information. To follow all our news, you can subscribe to the alerts system or to one of our different systems to provide you with all that is new.