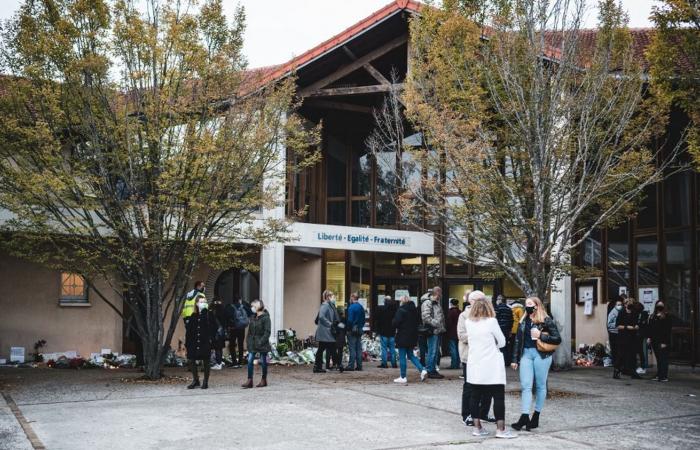 He traces the course of events before this fateful October 16. A report from the General Inspectorate of Education, made public Thursday, December 3, examines the events that occurred in Samuel Paty’s college before his assassination. While it confirms the responsiveness of the institution’s support, it highlights a lack of monitoring of social networks.

“The reconstruction of the course of events tends to show that, both at the level of the establishment, as well as at the departmental and academic levels, measures were taken with reactivity to manage the disturbance initially caused by the course on the freedom of expression of Samuel Paty “, writes the General Inspectorate of Education.

At the beginning of October, this 47-year-old history and geography teacher showed his students caricatures of the Prophet Muhammad during a course on secularism, which had created controversy among some parents. Ten days later, on the eve of the holidays, he was murdered by an 18-year-old radicalized youth of Chechen origin.

The principal of the college of Bois D’Aulne in Confans Sainte-Honorine (Yvelines) “accompanied the teacher the next day Tuesday when she received a first reaction from a mother of a student” and alerted the academy “from Thursday 8 even before having met the father of the pupil and the individual who accompanied him”, underlines the report.

Regarding the interview that Samuel Paty had with the secular academic referent, the principal and the education advisor, the inspectorate explains that initially, the teacher had “hard to perceive that by asking the students to go out, he made a mistake, he thinks that in this his behavior is in accordance with the principles of secularism”.

Samuel Paty then “recognized an awkwardness, insofar as what was thought to be a means of protecting the pupils has finally crumpled”, continues the inspection, specifying that “During the interview, it is repeated that he did not explicitly ask the Muslim students to go out but that they felt they were implicitly designated”.

“There was a good reactivity and professional reflexes on the part of Samuel Paty, the principal of the college and the various actors including the ‘Values ​​of the Republic’ teams of the Versailles academy. institution to the teacher seems to have been total “, says Minister of Education Jean-Michel Blanquer, in an interview with Figaro (subscribers article).

But the 22-page report also points to weaknesses, including this lack of monitoring of social media. After Samuel Paty’s lessons, the controversy, notably via the video of a student’s father, was particularly relayed on Facebook and Twitter. But the report notes that the alert has been given “by parents of pupils or by a teacher”.

The General Inspectorate of Education considers that “appears necessary to set up or increase the power of social media monitoring units”. It also returns to the exchange of information and recommends“to increase the fluidity and reciprocity of information exchange between the different levels of the services of the Ministry of National Education and those of the Ministry of the Interior so as, in particular, to allow an assessment of the degree of seriousness of an event “.

These were the details of the news a report points to the responsiveness of the institution but a lack of monitoring of social networks for this day. We hope that we have succeeded by giving you the full details and information. To follow all our news, you can subscribe to the alerts system or to one of our different systems to provide you with all that is new.