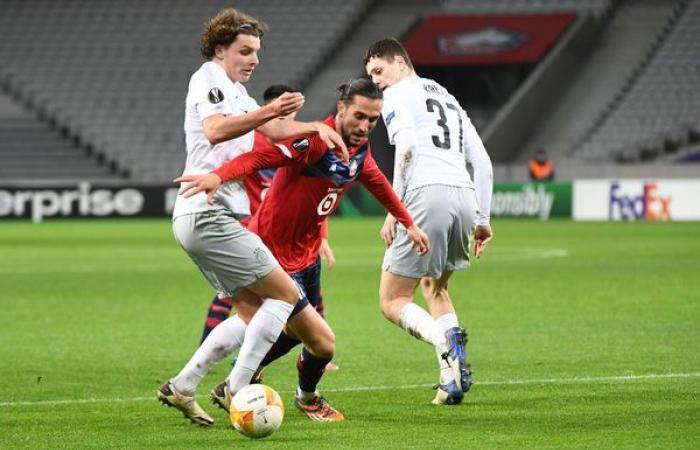 Entering late in the game, Turkish striker Burak Yilmaz scored twice to give Lille the victory against Sparta Prague (2-1) on Thursday. This success allows LOSC to secure its qualification for the round of 16 of the Europa League!

With Lille, Ligue 1 will have at least one representative in the European Cup in the second part of the season. The northern club has indeed qualified for the round of 16 of the Europa League.

Regardless of the outcome of the group’s other meeting (AC Milan beat Celtic 4-2), Lille knew that success would be enough for their happiness. But this well-deserved victory took a long time to emerge.

Well into his match, at least in terms of intensity, the LOSC quickly settled in the opposing half of the field. We felt the Mastiffs very involved but too technically imprecise to be able to tell the difference at the start of the game. It was even the Czechs who got the first chance on Pavelka’s strike from above.

A fear of no consequence for Lille who, despite their technical errors, managed to achieve some nice moves thanks to Yazici, at the origin of the two missed opportunities by Luiz Araujo! And whose center blocked by defender Plechaty was very close to deceiving goalkeeper Nita. Then his free kick allowed André to place a header on the bar just before half-time! No goal at the break, but once again in this competition, the Turkish attacking midfielder was in all the right places.

And we started again on the same bases after half-time. The Lille opportunities accumulated but the men of Christophe Galtier, like David twice, lacked efficiency. But also luck when the guard Nita stuck the head of Xeka… of the head! Fortunately, Lille would receive a little boost with the logical expulsion of defender Celustka caused by David.

Suffice to say that we did not expect to see defender Krejci (0-1, 71st) open the scoring with a header. We then believed in a real curse for the LOSC who had not won at home in the European Cup for 8 years. A stat swept away following the decisive entry of Burak Yilmaz (80th, 84th), double scorer thanks to his qualities as a finisher! This is how Lille overthrew Sparta and clinched their qualification even before the last day.

It’s true, we saw only one team for most of the match. But Lille still gave us some great sequences and above all a completely stunning scenario!

– After a short free kick on the left lane, Plavsic, not at all attacked, has plenty of time to cross at the far post. His ball landed on the head of Krejci, higher than Bradaric and who deceived goalkeeper Maignan (0-1, 71st).

– Thrown by David on the right side of the defense, Weah center back. Ikoné cleverly lets the ball pass, allowing Burak Yilmaz to cross a slow strike but sufficiently well placed (1-1, 80th).

– On a release from Botman, the Czech defense is holed up and let Ikoné take the ball. The French international erases an opponent and launches Burak Yilmaz perfectly, who opens his foot well to leave no chance for goalkeeper Nita! (2-1, 84th)

Maxifoot awarded a commented score (out of 10) to each player.

The Turkish striker played only a quarter of an hour, but this playing time was enough for him to reverse the situation! We have only seen him twice, that is to say on his two occasions that he concludes with remarkable coolness.

Mike Maignan (5): even if he sometimes abused long balls, the LOSC goalkeeper was interesting in his kicking game. It must be said that he did not touch the ball much with his hands …

Domagoj Bradaric (4): little success on his crosses in the first period, the left side recovered well after the break. He gives David a good goal ball and hits a nice shot that ends just off the post. But he spoils his performance by losing his aerial duel against striker Krejci. Replaced in the 85th by Reinildo (not rated).

Sven Botman (7,5) : Imperial in the air, the Dutch central defender ate the Czech attackers. He again showed great authority in his interventions and could even have scored if Krejci hadn’t saved in front of his line. In the end, he got involved in Burak Yilmaz’s second goal, unintentionally.

José Fonte (6): not very busy, the Lille captain took no unnecessary risk on the restart. A dangerous pressing in front and his release spun into the stands.

Tiago Djaló (3): in the absence of Celik and Pied, the central defender of training helps out on the right side. He therefore does not have the skill of a right back and it was again felt on his many losses of ball. His only combination with Araujo, however, resulted in a very well placed free kick at the entrance to the area. Replaced in the 77th by Timothy Weah (not rated), entered the position of right side which allowed him to deliver an assist for Burak Yilmaz.

Jonathan Bamba (6.5): less enterprising than usual with the ball to the foot, the former Stéphanois especially shone in his transmissions. He notably offered good opportunities to Yazici, David and Xeka whose header did not deceive goalkeeper Nita. He dropped out slightly at the end of the match to organize the game.

Xeka (6): little in sight and awkward in the first period, the Portuguese midfielder significantly increased his level of play in the second act. He managed to speed up the game and grab some high balls. He also projected himself, hence his two header chances, one of which was blocked by the goalie’s header. No chance…

Benjamin André (6): very, even too generous in the recovery, the midfielder did not let anything go. Even when he lost a duel, he refused to let Dockal go and committed a foul play, even if it meant taking a yellow card. Like Xeka, he had no success on his head which hit the bar. Replaced in the 85th by Boubakary Soumaré (not rated).

Luiz Araujo (5.5): very active in the first period, the Argentine striker created lags and offered himself two big chances, ineffective. He was then more discreet after returning from the locker room, which did not escape his trainer Christophe Galtier. Replaced in the 68th by Jonathan Ikoné (not rated), decisive passer on Burak Yilmaz’s second goal.

Jonathan David (7): scoreless, once again, the Canadian may have ended the meeting frustrated. However, he does not have to be ashamed of his performance. He certainly lacked efficiency on his occasions but it was still invaluable for his trips. And especially decisive since it causes the expulsion of Celustka before his involvement on the goal of the equalizer.

Yusuf Yazici (7): very inspired in this competition, the attacking midfielder was in all the right places in the first period! He negotiated some actions poorly but his breakthroughs, passes and free kicks put the Czech defense in jeopardy. It is at the origin of the occasions of Luiz Araujo, André and Xeka. And did not go far to get a penalty after a festival in the area. He only lacked efficiency, or that of his teammates. Replaced in the 77th by Burak Yilmaz (8), see comments above.

+ Find the results and the Europa League standings on Maxifoot

And for you, who were the best and worst players of the game? Comment in the “comments” area below!

These were the details of the news Burak Yilmaz qualifies Lille! – Player debriefing and NOTES (LOSC 2-1 Sparta) – Football for this day. We hope that we have succeeded by giving you the full details and information. To follow all our news, you can subscribe to the alerts system or to one of our different systems to provide you with all that is new.