Sean Hannity: “I’m not checking it out” – Donald Trump’s confidante... 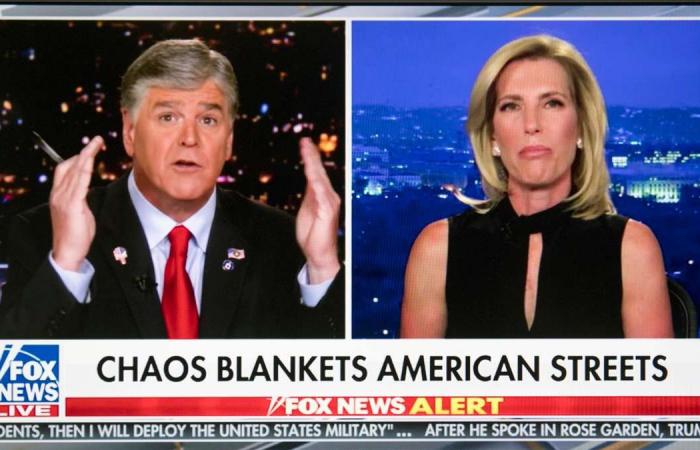 Sean Hannity remains loyal to Donald Trump even after the US election. The Fox News presenter frankly admits on his show that he “does not check information”.

Update, 19:48 Uhr: Donald Trump proved at the beginning of December that there was still a subtle difference between the message formats from Fox News and the opinion shows on the station. Had the US President the day’s program was recently dubbed “no longer visible”, but that evening he shared two posts from Fox on his Twitter channel. Below again Sean Hannity.

The Fox-Moderator declared in the opening monologue of his show that he and the 74 million voters would never believe the “media mob”. Sean Hannity underpinned the claim with statistics from the US website “Politico”, one of the media, which he had previously described as untrustworthy, politically motivated and overall as the “propaganda department of the Democratic Party”. Politico had determined that 79 percent of all Donald Trump voters believe the election was decided for Joe Biden through illegal votes and fraud.

Also Tucker Carlson was allowed to find out about free advertising from Donald Trump looking forward. In his contribution, he criticized the way the democratic state government and the mayor of New York were dealing with the corona pandemic.

First report from December 1st, 6:00 p.m .: Washington – There has been an intimate love between the for a long time US presidents and its television station. Fox News Donald Trump held the pole, he called the live shows regularly, was a welcome interview partner and shared content from the news channel with its 88 million followers on Twitter.

But still on the day of US election crashed the relationship between Donald Trump and Fox News into a deep crisis. Ironically, it was the conservative news broadcaster that Joe Biden was ahead of the liberal competition of CNN and NBC declared the winner in Swing State Arizona. Trump is said to have run furiously through the corridors of the White House, asking his son-in-law Jared Kushner to call Rupert Murdoch to put pressure on the Fox owner. It was no use Fox News stayed and the democrat Biden the winner.

The reporting has been striking ever since Fox News clearly different. The station is critical of the attempts by Donald Trump and his legal team around Rudy Giuliani who US election to discredit. At least in the daily program. From 8:00 p.m. it looks different. Then the opinion shows start Fox News: first Tucker Carlson, then Sean Hannity and finally Laura Ingraham provide the audience with a clear opinion Joe Biden and almost unconditional loyalty too Donald Trump.

Especially Sean Hannity is considered a close ally of the US presidents. The 58-year-old martial arts fan has already been referred to as the President’s “shadow chief of staff” by White House staff. Donald Trump calls regularly. Hannity accompanied the then candidate in 2016 in the election campaign against Hillary Clinton to his appearances.

Neither the election defeat against Joe Biden nor did Donald Trump’s consistent refusal to accept it, changed something about male friendship. Sean Hannity remained loyal to the president and spread his accusations in the direction of the Democrats and increasingly also in those of his own Republican party – without contradiction and without examining them.

At least that was Sean Hannity now in his eponymous show quite frankly. “I’m not checking the information in this program,” the moderator admitted frankly. Hannity actually wanted to make the difference to the “media mob” clear, which in his opinion dominates the USA and to which he is next to CNN the newspapers of the “Washington Post” and the “New York Times” count.

Just before his appearance Sean Hannity still interviewed Sidney Powell. Donald Trump had just distanced herself from Powell and kicked her from his legal team because the lawyer was at the side of Rudy Giuliani Spreading conspiracy theories about Dominion, Hugo Chavez and the Chinese, which probably went too far even for the elected president.

But Powell still represents Trump’s former security adviser, Michael Flynn. Flynn pleaded guilty to providing false information to the FBI in 2017. His former boss then overturned the verdict against him. Donald Trump pardoned Flynn in the last few yards of his presidency, sparking a controversial discussion.

Unsurprisingly Sean Hannity and Sidney Powell agree on whether it is for Donald Trump was legal and morally defensible to pardon Michael Flynn. “The president can pardon anyone he wants. He has the authority to do it, ”said Powell. And Hannity followed up. “The president should pardon himself and his entire family,” rumbled the Fox presenter. “His power here is absolute.”

Thus, the assessment of both differs not only from numerous legal experts who, among other things, on Fox News no way see how one US President should pardon myself. Sean Hannity and Sidney Powell also forget a crucial point. The President can only pardon those who have previously pleaded guilty. Donald Trump would have to admit one or more of the crimes accused of him. (By Daniel Dillmann)

These were the details of the news Sean Hannity: “I’m not checking it out” – Donald Trump’s confidante... for this day. We hope that we have succeeded by giving you the full details and information. To follow all our news, you can subscribe to the alerts system or to one of our different systems to provide you with all that is new.