Beco do Batman is painted black in honor of the artist... 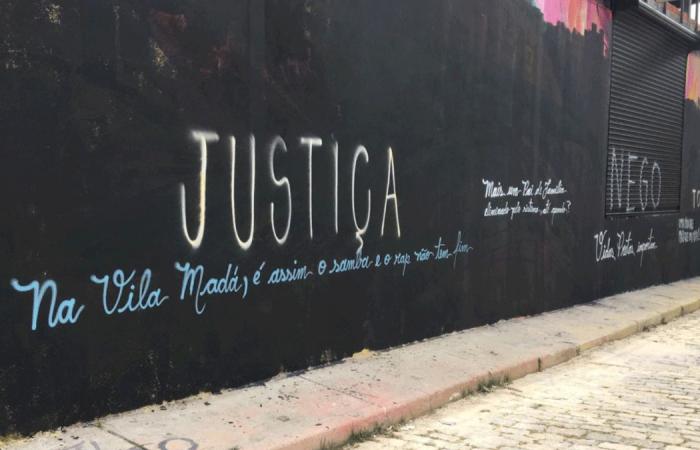 This weekend, Beco do Batman, the region’s traditional cultural stronghold, had its walls famous for the colorful graffiti painted in black by various artists in mourning and protest, with phrases asking for Justice for the murder of Wellington Copido Benfati, known as NegoVila Madalena, 40 years old.

Despite claiming self-defense to shoot the artist, the sergeant gives Military Police (PM) Ernest Decco Granaro, 34, was arrested in flagrante delicto by other military policemen and ended up indicted for murder by the Civil Police.

O G1 was unable to locate the suspect’s defense for comment until the publication of this story. The police officer is in the prison of PM Romão Gomes, in the North Zone.

Nurse Tatiana Benfati and brother Nego Vila. The artist was killed by an off-duty PM after an argument in Vila Madalena, in São Paulo – Photo: Disclosure / Personal archive

Witnesses told the police station, which is close to the crime scene, that they saw Ernest shoot NegoVila in the chest when he was lying on the floor without posing any risk to the policeman.

The investigation of the case is carried out by the 14th Police District (DP), in Pinheiros. Police officers heard by the report said they were trying to locate security cameras that may have recorded the crime. It was committed at dawn last Saturday near a beverage distributor and a gas station, between Deputado Lacerda Franco and Inácio Pereira da Rocha streets.

According to the nurse Tatiane Benfati, 43-year-old sister of NegoVila, witnesses told her that her brother tried to break up a fight between his friend and other people. Then, according to reports, the PM, who was without a uniform, punched the artist, who retaliated.

“I don’t know if the policeman looked at him [NegoVila] angry because he was black or because my brother hit him. What would make him kill my brother? ”Asks Tatiane. “Why was my brother’s life worth so little?”

According to the case report, the sergeant claimed he was off duty and shot the artist in self-defense after being surrounded by people who “tried to ‘take’ his firearm, having indicted him and fired his pistol in order to to repel the unjust aggression he was suffering ”.

NegoVila worked in film and commercial productions, according to his sister – Photo: Disclosure / Personal archive

But four of the seven witnesses heard at the police station gave another version that was decisive for the understanding of the police authority that the PM shot the artist to kill and not to defend himself.

“They presented a version of the facts in which Decco, after a first shot – that did not hit the victim, but that laid him on the ground – shot Wellington a second time, in a scenario where the victim was still lying on the ground, ending up reaping your life ”, informs an excerpt from the case report.

Still according to witnesses, the sergeant was going to shoot NegoVila again, but a friend of the victim threw himself on the artist to protect him and asked “for the accused not to hurt the victim”.

NegoVila loved to skateboard, another of his passions – Photo: Disclosure / Personal archive

As the location is close to the police station, which is located at Deputado Lacerda Franco Street, other PM agents who were in the police district registering an occurrence left when they heard two gunshots. And they went to see where the noise came from.

Military police said that as they approached a liquor dispenser and a gas station they found people saying that a man near a tree had shot and injured a person. And that he was pointing the gun at other people.

The sniper, “still having difficulty speaking and signs of intoxication”, identified himself as a military policeman, but he did not want to obey the orders of the other PMs to drop the weapon and surrender. It took another military policeman to disarm him. Then Ernest was handcuffed and taken to the 14th DP.

Meanwhile, NegoVilla was lying on the floor. Then, an ambulance took him injured to the Emergency Room of Lapa, where he did not resist the injuries and died.

Beco do Batman is painted black as a sign of mourning and has white inscriptions in protest for the murder of NegoVila – Photo: Aldieres Batista / Personal archive

“I am very sad, very shocked. My brother was not just from my family, he was not just ours, he is from Madalena village ”, said Tatiana, who said goodbye to NegoVila on Sunday (29th), at Lapa Cemetery. “His funeral could not be different than it was. With a lot of music, a lot of drumming, a lot of joy, a lot of indignation. It was very beautiful”.

In order to demand justice from the authorities, NegoVila’s friends decided to paint the walls of Beco do Batman black, as a sign of mourning. In it were phrases like “Justice – In Vila Madá, it goes like this: samba and rap have no end”.

According to her sister, besides being a visual artist, NegoVila was a rapper, skater, graffiti artist and helped with productions and locations for cinema and commercial films.

“I was very happy. He had a passion for the Magdalene Life. My father was born in Vila Madalena. So in August he went to live in a house with friends ”, remembers Tatiane.

“So much so that his nickname, NegoVila, is because of his identification with the neighborhood”, comments the sister, who received a skateboard shape that was from her brother, signed and with messages from friends. “Nobody signed an attendance book. Their presence was on skateboarding, another passion of his ”.

Friends of NegoVila signed the shape of the artist’s skateboard and gave it to his sister as a souvenir – Photo: Disclosure / Personal archive

The son of a black man and a white woman, NegoVila appears as being ‘brown’ in his identity. “But he always considered himself black,” says his sister, who also sees herself as a black woman. Her parents, now deceased, had five children.

Tatiane commented that it is still not possible to know if her brother was killed by racism, but she suspects that this may have happened. The policeman who shot is white.

“I cannot say that there was racism, but I see no other reason”, said the nurse.

NegoVila leaves a 9-year-old daughter, fruit of a previous relationship, and art spread in Vila Madalena, where she lived.

Friends and family say goodbye to NegoVila at his funeral in the cemetery of Lapa, West Zone of São Paulo – Photo: Disclosure / Personal archive

Phrases painted in Batman’s Alley in protest for the murder of NegoVila – Photo: Disclosure / Aldieres Batista

These were the details of the news Beco do Batman is painted black in honor of the artist... for this day. We hope that we have succeeded by giving you the full details and information. To follow all our news, you can subscribe to the alerts system or to one of our different systems to provide you with all that is new.