Mike Tyson will earn $ 10 million for his exhibition this Saturday 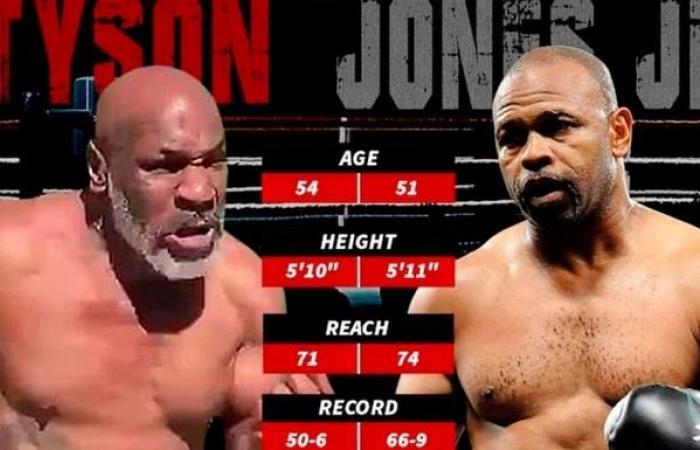 The long-awaited exhibition fight between former heavyweight Mike Tyson and Roy Jones Jr. is a few days away from taking place, and the earnings for each boxer for participating in the show that will take place early Saturday morning have already been announced. Sunday in Los Angeles.

Tyson, 54, whose last action in the ring was a 2006 exhibition fight against Corey Sanders after a 2005 loss to Kevin McBride, will receive $ 10 million, according to a Yahoo News report. which adds that Jones will win a million.
Mike Tyson had previously assured that he intends to donate his proceeds for charity. In an interview last July with TMZ, Tyson said his profit “will go to various charities, so no one will have to worry about me getting rich or jealous and saying I’m doing this for money.”
“I don’t get anything and I feel good doing this because I can,” added the former American fighter, a double world heavyweight champion in the 1980s.
Despite a display that Andy Foster, executive director of the California State Athletic Commission, unflatteringly called a “tough sparring session,” the Tyson-Jones fight is slated for eight rounds.
Additionally, the November 28 fight will be scored by a recognized sanctioning body, and the winner will also receive a belt.
Tyson has even hinted in recent weeks that there could be additional fights in his future, regardless of how the fight against Jones Jr, also a former heavyweight world champion, plays out.
The main card for Saturday’s boxing night at the Staples Center in Los Angeles is scheduled for 9 p.m. ET.

These were the details of the news Mike Tyson will earn $ 10 million for his exhibition this Saturday for this day. We hope that we have succeeded by giving you the full details and information. To follow all our news, you can subscribe to the alerts system or to one of our different systems to provide you with all that is new.