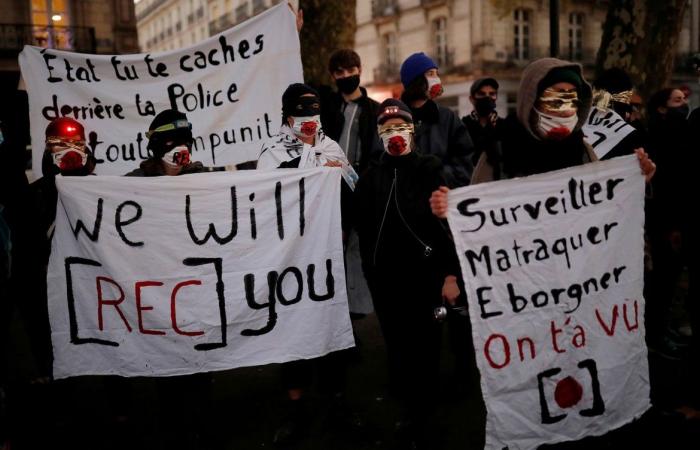 The images went viral on social media and provoked the outrage of football players, activists and opposition politicians. Everyone denounces racism and abuse by the French police.

By the beginning of the night, the video showing the violent aggression against black music producer Michel Zecler had been seen by 7 million people. The images, published by independent media Loopsider, show the man being beaten by police officers.

Three agents claimed that they intervened because the producer was on the street without a mask. They said they were “dragged” by the victim into the building. A fourth police officer, who came in as a backup to “help his colleagues”, is suspected of having dropped a tear gas bomb on the music studio.

Michel Zecler, who filed a complaint accompanied by his lawyer at the headquarters of the Inspector General of the National Police in Paris (IGPN), a body equivalent to the police internal affairs unit in Brazil, said that the police had repeatedly called him “dirty creole”.

At the end of his testimony, he stressed that his only expectation is that “police internal affairs (IGPN) work will be done.” Interior Minister Gérald Darmanin said that the officers involved will be fired.

The case comes to light in a week when President Emmanuel Macron’s public security policy is criticized by the leftist opposition and faces a wave of street protests.

On Monday (23), a violent police operation to remove Afghan migrants from the Republic Square in Paris shocked even the interior minister.

The following day, the National Assembly passed a controversial law that prohibits and criminalizes the filming of police officers during their interventions. Before that vote, for ten days, unions of journalists and civil rights defenders made a series of demonstrations to denounce the text, considered a censure of the freedom to inform.

Praised by police unions, supported by the right and the extreme right, this article in the new Global Security Law is touted as an authoritarian drift from Macron.

The president did not speak. Prime Minister Jean Castex said the controversial article would be modified and sent to the Constitutional Council for review.

The images of gratuitous violence against the black producer generate strong indignation.

“The rule of law is not negotiable,” tweeted the mayor of Paris, socialist Anne Hidalgo. She said she was “deeply shocked by this intolerable act”.

Jean-Luc Mélenchon, leader of the radical left, saw in the video circulating on social media “the terrible proof of the vital nature of the right to film police action”.

He called the French police a “barbaric militia” and demands the resignation of Paris police chief Didier Lallemend, a hardliner. “Lallement must leave,” tweeted Mélenchon.

In a rare public statement, Paris prosecutor Rémy Heitz said he expected the case to be investigated and concluded “as soon as possible”. “This is an extremely important issue for me and I have been following it personally since Saturday,” said the prosecutor.

“Zero tolerance against racism and against this violence, which has no place in our Republic,” tweeted in turn Christophe Castaner, a former interior minister who left his post criticized for his performance against the yellow vests and is today the leader of deputies of the LREM presidential party in the National Assembly.

“They are hurting my France,” tweeted striker Antoine Griezmann, mentioning the interior minister. Samuel Umtiti, his teammate in the French football team, who also shared the video.

In camera footage from the studio’s internal circuit, also seen by AFP, the three policemen are seen entering the scene, grabbing the man and punching, kicking or hitting him. In their report, agents wrote that it was Zecler who had attacked the police.

According to those same images, the producer resists to avoid being taken to the car, then tries to protect his face and body. The scene lasts five minutes and the victim does not appear to have hit the police.

In a second moment, the people who were in the basement of the studio manage to reach the entrance, causing the police to retreat to the street, slamming the studio door. The police then try to force the door and drop a tear gas bomb at the scene.

Bruised and bleeding, Zecler was taken to a police station, where an investigation was opened for “violence against a person with public authority” and “rebellion”.

But the Paris prosecutor’s office closed this investigation and opened a new investigation on Tuesday, this time for “violence by public officials” and “counterfeiting of BO”.

“If we didn’t have the videos, my client could currently be in prison,” said the producer’s attorney, Hafida El Ali.

Videos: G1’s most watched in the last 7 days

These were the details of the news Black music producer beaten by French police, video goes viral and... for this day. We hope that we have succeeded by giving you the full details and information. To follow all our news, you can subscribe to the alerts system or to one of our different systems to provide you with all that is new.