The Next American Role in Libya: Two Scenarios for “Re-engagement” 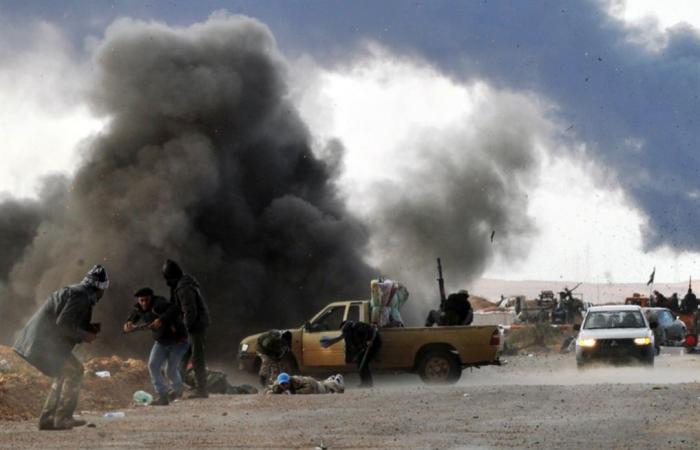 The administration of the outgoing US President Donald Trump approached the Libyan crisis from the perspective of “disengagement”, and contented itself with observing regional and international roles and their effects on the Libyan competitors, whether the “reconciliation” government whose popularity on the ground has significantly eroded and now depends for its survival mainly on international support. And western; Or the camp of retired Major General Khalifa Haftar, who has adopted conflicting agendas, relying on his accumulated political experience since his presence in “Langley”, the headquarters of the CIA three decades ago. However, the American approach recorded a remarkable paradox in April 2019, following Trump’s contact with Haftar, and the hesitation about the former’s support for the latter – in what was later denied by White House officials – in the midst of its campaign to “conquer Tripoli” since the beginning of the same month, Days before the date of the “inclusive national conference” was scheduled to be held under Libyan national and international efforts and arrangements that lasted about two years before the attack. This policy was widely welcomed by Trump’s allies in the region, for its consistency with the nature of their intervention in the Libyan crisis. Although the US State Department has repeatedly declared standing behind the “reconciliation” government, Trump’s uneasy behavior has strengthened Haftar’s positions and the regional parties supporting him, and pushed away from accepting a political settlement preceded by a comprehensive ceasefire. Turkey’s entry, militarily, along the Libyan crisis, predicted the existence of an American green light to reach the brink of open war, before the United States announced in the middle of this year its support for a ceasefire and escalated its warning tone against foreign military intervention in Libya (especially since August 2020), and groups in the US House of Representatives are increasing pressure on Trump, stunned by his electoral defeat, before the middle of this month to take action to reduce the major violations of the decision to ban arms exports to Libya, to ensure that American weapons are not used in the ongoing conflict in the country, and to impose trade sanctions on countries that This decision was violated, led by Russia, Turkey and the UAE, according to a speech by a group of representatives led by Cory Booker.
As for the administration of the US President-elect, Joe Biden, it is likely that it will seek to reconnect with the Libyan file in a broader context, considering Russia and its policies the “greatest enemy” of US interests in the world, and in Libya as well. However, the momentum of the American role, especially in its early stages, depends on the extent to which the European parties adopted a coherent “Libyan” policy. In this context, there are several remarks worthy of consideration, including that the president-elect had a famous stance on Libya when he was former Vice President Barack Obama. He was a subject of disagreement with Hillary Clinton, the Secretary of State in the same administration and the Democratic candidate after that, and his tenets were opposition to intervention in Libya, which he saw Biden, speaking to “CBS” in mid-June 2016, said that with the departure of Muammar Gaddafi it became “divided and a breeding ground for extremism”, considering that “the United States should not resort to the use of force (in Libya or elsewhere) except in the event that its interests or allies are threatened. direct”.

While it is expected that the new president will be absorbed by at least 80% in American domestic issues, it is not until the spring of 2021 that for practical reasons, his actual involvement in the politics of the Middle East in general and Libya in particular is expected until the spring of 2021. In this context, it is assumed that the Biden administration will tend to support the efforts of the United Nations. To settle the crisis and ensure the smoothness of the current path leading to the holding of national elections in December 2021, according to the agreement of the Libyan parties this November, especially since “a stable Libya” is in the interest of greater US involvement in the affairs of the region, and the issues of gas exploration and exploitation, In line with a foreign policy that recalls long-term interests.
In general, there are two main scenarios for Biden’s approach to the Libyan file: The first is to track Obama’s reservations about a strong American commitment to Libya, given that it is a matter of concern to the European ally in the first place. As such, Biden is expected to continue a somewhat cautious policy towards any new military interventions, and to substitute that push for a strong diplomatic path. As for the second scenario, which is the most compact, the Biden administration would tend toward a more serious policy in order to compensate for the American absence, and the consequent growth in the influence of international and regional powers in the Libyan file, and the ineffectiveness of Trump’s policy by leaving the space for the interventions of these forces without any reservations. And taking advantage of Washington’s position as the only party that can address all parties to the crisis. This scenario is reinforced by the fact that Libya is one of the hot spots for an expected, and even inevitable, American-Turkish confrontation, after Turkey played the role of collusion in favor of the Trump administration in many of the American files on the African continent (as in the Sahel region, Somalia, and Libya). It is a role that will be completely recalibrated or considered under the Biden administration, despite the positive signals expressed by the Turkish President, Recep Tayyip Erdogan, during his congratulations to the president-elect, and his Foreign Minister Mevlut Cavusoglu affirming that there are many opportunities to help improve bilateral relations, especially their cooperation in “Ending the conflict in Syria and Libya.” In the advanced context, the Greek Prime Minister, Kyriako Mitsotakis, expected a greater engagement by the Biden administration in easing tensions in the eastern Mediterranean, and at the heart of it was the crisis of delineating the Turkish-Libyan maritime borders.
With regard to the approach of the parties to the crisis to the new administration, one notes the initiative of the head of Al-Wefaq, Fayez Al-Sarraj, to send a hasty message to Biden, in which he congratulates him and expresses his aspiration to work together “to achieve a civil democratic state in Libya,” in a preemptive step to expect Al-Sarraj to have a role New in the future, after withdrawing his resignation, which he pledged last October, and suggesting at the same time that the Libyan parties sought to preserve the existing balance until the last possible moment. As for Haftar, who received an exaggerated estimate of his ability to resolve the conflict in Libya, he relied on close relations with Trump and the interests of the American oil companies still operating in Libya (the most important of which is the Worldwide Strategic Energy in Texas), and exploited the loopholes of Washington’s dual approach in the Libyan crisis, What observers considered was a disparity in Trump’s support for Haftar in exchange for the defense and foreign ministries’ support for “reconciliation”. However, under the Biden administration, the margin for maneuver in front of Haftar will narrow, except in the event that a new role is formulated for him with regional support in the first place, and perhaps with high conditions on the stage of his role as a guarantee of security stability in the ongoing political settlement process.
In the end, in what has become an example of a state crisis that is mainly dependent on the connections of local actors with others, regionally and internationally, it is expected that the Libyan crisis will witness a solution under the Biden administration, even if that expectation remains dependent on the positions of the internal parties, which do not seem to have decided to give the opportunity to the choices of the Libyan people. Beyond the political and military polarizations, it appreciates the erosion of its assets with the Libyans, and the exposure of its external intertwines that put citizens at the end of the priorities of its agendas.

These were the details of the news The Next American Role in Libya: Two Scenarios for “Re-engagement” for this day. We hope that we have succeeded by giving you the full details and information. To follow all our news, you can subscribe to the alerts system or to one of our different systems to provide you with all that is new.