The agreement between Sudan and Israel: Abdel Fattah Al-Burhan denies that... 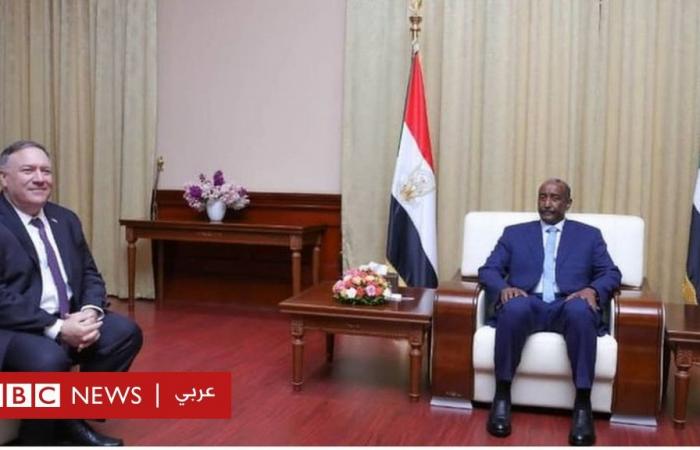 The head of the Sudanese Sovereignty Council, Abdel Fattah Al-Burhan, denied that Khartoum was subjected to US “blackmail” regarding approval to establish relations with Israel.

On Friday, the White House’s announcement of an agreement to normalize relations between Sudan and Israel coincided with US President Donald Trump’s announcement that Sudan had been removed from the US list of states sponsoring terrorism.

Al-Burhan said that he had consulted with the Sudanese prime minister and most political forces before announcing the agreement.

Sudan has actively sought to remove his name from the list, and its demands increased after the ouster of President Omar al-Bashir in 2019.

“We have not blackmailed into normalization,” al-Burhan said in an interview with Sudanese state television.

But the proof acknowledged that the United States was one of the “catalysts for the decision” to establish relations with Israel.

On Sunday, the Sudanese Ministry of Foreign Affairs said that US Secretary of State Mike Pompeo demanded normalization with Israel with the aim of removing Khartoum from the terrorism list during his visit to the Sudanese capital in August.

Al-Burhan said, “I prefer to call it reconciliation rather than normalization. Until now, we have not reached an agreement. We will sign with the other parties America and Israel aspects of cooperation,” adding that “reconciliation” “is in the interest of Sudan.”

“Deleting our name from the list … will allow us to return to the international community. We will benefit economically and get technology,” he added.

He indicated that this diplomatic development “will allow the passage of aid” to implement the peace agreement between the Sudanese parties signed on October 3.

Critics in Sudan accused the authorities of betraying the “cause of Arab nationalism” and the Palestinians by agreeing to normalization with Israel.

“We all want a Palestinian state within the borders of 1967 … but we do not want to make Sudan bear full responsibility for that,” al-Burhan said.

Al-Burhan denied rumors of pressure from the United Arab Emirates, which, along with Bahrain, had normalized relations with Israel in recent weeks.

Sudan said on Sunday that a joint meeting with Israel would be held “in the coming weeks to discuss and conclude cooperation agreements in the fields of agriculture, trade, economy, aviation, immigration and other issues.”

The office of the Israeli Prime Minister, Benjamin Netanyahu, said that Israel would send five million dollars worth of wheat to Sudan, as it seeks to fill renewed protests over the food shortage.

These were the details of the news The agreement between Sudan and Israel: Abdel Fattah Al-Burhan denies that... for this day. We hope that we have succeeded by giving you the full details and information. To follow all our news, you can subscribe to the alerts system or to one of our different systems to provide you with all that is new.