Fears that Norwegian gas may be on its way to war... 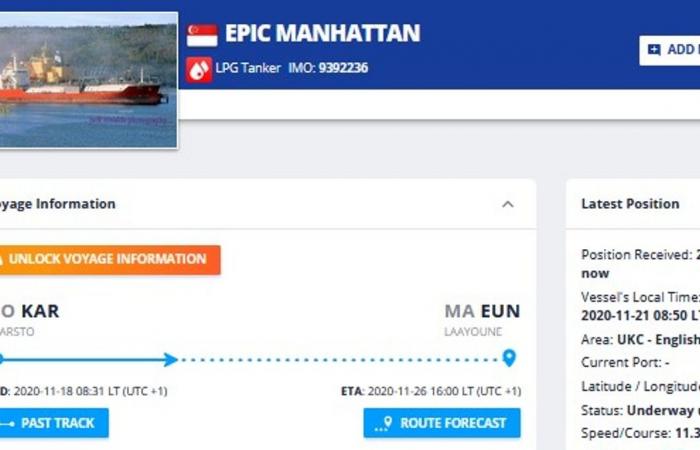 – The Norwegian Treasury is sitting here and making money from other people’s misfortune and an occupation in Africa, says Erik Hagen.

He heads the support committee for Western Sahara, and has grown tired of Norwegian gas ending up in occupied territories.

According to the support group, this has happened at least once earlier this year, something Equinor has apologized for, and assured that they will never do again.

Last week, war broke out in occupied Western Sahara, after 29 years of peace. It will be very controversial if Norwegian gas ends up in a war zone. A significant part of the income from the sale can in principle end up in the Norwegian treasury in the form of tax.

The Ministry of Foreign Affairs advises against all business activity with the country.

Last Wednesday, the gas tanker Epic Manhattan left Kårstø in Rogaland. By then, the ship had registered that it would transport gas to the city of El Aaiún in Western Sahara, writes Finansavisen.,

After a few hours, the port of call was abruptly changed to Agadir in Morocco.

The gas tanker belongs to the Singapore shipping company Epic Gas. It is majority owned by Andreas Sohmen-Paos BW Group, which is partly built on what was once the Norwegian shipping company Bergesen.

The group has close ties to Norway and is also behind shipping companies such as BW LPG, Hafnia Tankers and BW Offshore as well as BW LNG.

– You almost have to talk to someone in Epic about this. I do not have an overview of their activities, says the head of BW LPG, Anders Onarheim to Finansavisen.

Epic Gas Ltd., which owns Epic Manhattan, does not directly answer the question of whether it is for Western Sahara gas freight.

But the shipping company writes in an e-mail to NRK that it operates within international law and the sanctions that apply to global shipping activities.

– We fully comply with the UN rules regarding Western Sahara, and to ensure that we do not violate current regulations, we have obtained legal reports on the legality of shipping to Western Sahara, writes Uta Urbaniak-Sage.

LPG gas is typically a mixture of propane and butane gas, similar to the gas used for cooking in Norwegian gas grills.

– Sea freight of LPG gas into Western Sahara does not violate any legal rules that can be prosecuted legally (legally enforceable bond), writes Urbaniak-Sage.

– The absence of sanctions does not mean that something needs to be in line with social responsibility, human rights or international law. The same line of argument – that shipping is fine if it is not in conflict with sanctions – was also used by Norwegian shipping companies during the Apartheid period in South Africa. As Epic Gas now appears, they could not care less about the injustice they are helping to support, comments Erik Hagen in the support group.

– I am a little shocked that there are companies that clearly do not take the conflict or Norwegian political wishes not to contribute to the conflict seriously, says parliamentary representative Trine Skei Grande (V), who for many years has been involved in the conflict.

Grande characterizes it as a serious violation of what is Norwegian politics, if the gas ends up in Western Sahara.

– It is bad political practice from a company to be responsible for such deliveries, says Grande.

Storting representative Solfrid Lerbrekk (SV) has previously asked questions in the Storting about gas freight to Western Sahara. She thinks the government is too passive.

– It is not enough that the Ministry of Foreign Affairs advises Norwegian industry not to trade with Western Sahara and the occupied territories. If war has broken out in the country now, it is really time for the government to do more in this matter, she says.

Lerbrekk believes the government is doing far too little to prevent violations of international law.

– No ban on exports

Batch secretary Audun Halvorsen (H) tells NRK that the gas transported from Kårstø is owned by a number of companies, also international.

– Even if the gas comes from the Norwegian continental shelf, it is the individual company’s responsibility to comply with international laws, sanctions and embargos, and to comply with the guidelines and advice that apply in the various companies’ home countries, says Halvorsen.

He says that even though Norway advises against business and exports to Western Sahara, this is not legally binding.

– However, there is no legally binding ban on exports and business activities aimed at Western Sahara, nor are there UN sanctions or restrictive measures by the EU that entail export restrictions.

According to the State Secretary, the Ministry of Foreign Affairs is concerned about developments in Western Sahara.

– Norway supports the UN’s work for a political solution and emphasizes the importance of the Secretary – General appointing a new special envoy as soon as possible. We will also base this position on when we will be a member of the UN Security Council from January 2021, says Halvorsen.

It is not known which company sold the gas

The gas was unloaded at the state’s processing plant at Kårstø in Rogaland.

Gassco AS is the operator of the Norwegian gas transport system, which includes the process plants at Kårstø, Kollsnes, Nyhamna and Vestprosess.

Gassco is 100% state-owned and owns neither the plants nor the gas that flows through the system the company operates.

– It is the individual company that lifts its volume from Kårstø’s responsibility to ensure that one is in line with current sanctions and guidelines. For reasons of confidentiality, we can unfortunately not provide information about loads / sales, says Lisbet Kallevik in Gassco.

She says that in connection with the issuance of cargo documents, ships will state their destination, but that it is not unusual for ships to change route and destination after the ship has left the harbor at Kårstø.

Equinor informs NRK that the company has neither sold nor transported the gas, which apparently arrives at Agadir in Morocco on Wednesday morning.

If it does not change destination again, as it has done several times in the last week.

These were the details of the news Fears that Norwegian gas may be on its way to war... for this day. We hope that we have succeeded by giving you the full details and information. To follow all our news, you can subscribe to the alerts system or to one of our different systems to provide you with all that is new.