Article 24 of the Global Security Law, a source of discord... 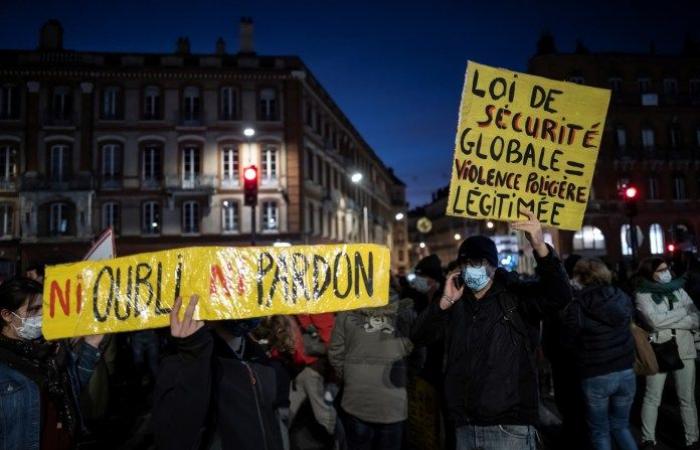 Subject of all the tensions, article 24 of the bill on comprehensive security adopted on November 20 created violent debates in the Assembly and aroused the concern of part of the political class and many journalists.

For three days, the deputies scrambled about article 24 of the bill on comprehensive security dear to Gerald Darmanin. This article voted on, this November 20, which provides for punishing a year of imprisonment and a fine of 45,000 euros “for broadcasting […] with the aim of damaging his physical or mental integrity, the image of the face or any other element of identification “of a police officer or a soldier in operation, gives rise to heated debate.

This November 20, while the elected officials roared in the Hemicycle, the National Assembly barricaded itself outside as can be seen on images of journalist Rémy Buisine. A new event is also planned for November 21, at the Trocadéro, at the call of many organizations including the

and journalists’ unions who denounce an attack on the freedom to exercise.

A small demonstration of a few dozen people was held at the very moment when the important police device was put in place to protect the building against possible overflows during the demonstration on 21. A first demonstration organized on November 17, had degenerated into clashes. On this occasion, several journalists were arrested and some taken into custody, including a journalist from France 3, arousing strong indignation.

The profession is concerned about the effects that the application of such a law could have. Sensing the controversy swelling on this sensitive issue in democracy and wanting to be reassuring, the Minister of the Interior announced, on November 19, an amendment to the criticized article 24, guaranteeing, according to him black and white, the freedom of the press . In the Hemicycle on November 20, he promised: “If someone films images of police acts contrary to the rules, he can quite broadcast them, even live, without blurring.” For the minister, “this Article 24 would not therefore have prevented the occurrence of the Benalla Affair”. What we can no longer do, explained the minister, is to call for violence against the police, ask for their address or threaten their families.

Strong tensions in the Assembly

But for many opponents of this text, the current French legal arsenal is sufficient and already punishes these offenses of threats to physical and mental integrity.

For the socialist group which has positioned itself against the article, the minister has not succeeded in demonstrating how the threats, the attack on physical and psychological integrity are not already covered by the law.

Marietta Karamanli, Socialist member of the Sarthe also estimated that “the new incrimination will be inapplicable from a judicial point of view” and will have “deleterious effects for individual freedoms”.

For La France insoumise, the deputy Alexis Corbière warned that no version of this article will modify the negative opinion of his group. For him, this article 24, “it is a limitation of the rights of citizens and of the freedom of the press that you will include in the law”. “In all the versions that you support and that you will support, it is the police officer or the gendarme, who will assess, alone, on the basis of subjective criteria, whether the images being taken infringe, I quote , “to his physical or mental integrity”, denounced the deputy.

About forty members of the MoDem group tabled an amendment to delete article 24: “Punishing legal behavior in itself simply because of the malicious intent of its author is not in accordance with the liberal tradition of our criminal law, since the Enlightenment ”, estimate these elected officials. But strangely, the MoDem group has positioned itself mainly against this amendment. Nearly four votes, according to the deputy

, heckled by his comrades. For him, this article does not call into question the freedom of the press, even less in its latest version. But the MoDem group is

, wanted to explain the member of Finistère Erwan Balanant.

The government project therefore found no support either on the left or in the center. It is from the right that this support has come to help the majority.

For The Republicans (LR), the deputy Eric Pauget estimated that “our arsenal does not sufficiently protect our police forces” (LR). He is in favor of blurring the images of police and gendarmes, and to extend the measure to the military, customs officers and prison officers.

For the patron of the National Rally (RN), this article “which aims to protect the police and gendarmes goes in the right direction”. “There is no gendarme or any police officer who will be able to prohibit someone during a demonstration from filming,” said Marine Le Pen who assured that “it is the fact of broadcasting the video that allows recognition Of the agents who will be accused.

The Defender of Rights Claire Hédon demanded for her part, this November 20, “the withdrawal” of the controversial article that she considers “useless” and potentially harmful to the control of the action of the police and gendarmes.

These were the details of the news Article 24 of the Global Security Law, a source of discord... for this day. We hope that we have succeeded by giving you the full details and information. To follow all our news, you can subscribe to the alerts system or to one of our different systems to provide you with all that is new.