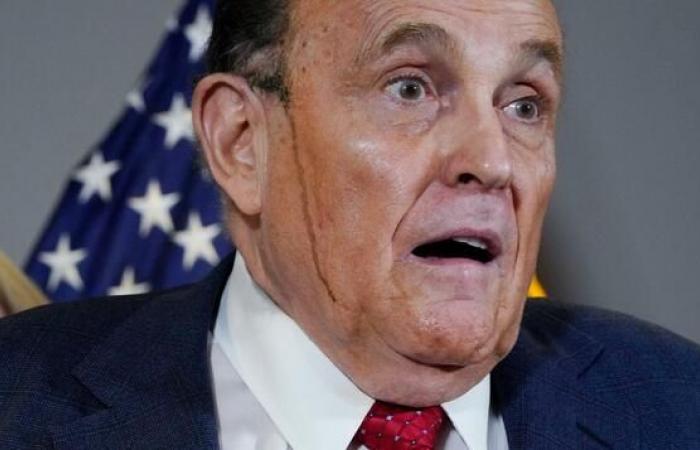 For some US journalists, it was the most demagogic press conference they have ever seen. Donald Trump’s attorney Rudy Giuliani made wild allegations. An American election has never been so manipulated.

The roots of the conspiracy reached as far as socialist Venezuela, claimed Giuliani. In large democratic cities like Atlanta, Detroit, Philadelphia and Milwaukee, massive numbers of votes for Joe Biden have been forged.

This is the only way to explain that the Democrat is said to be ahead in Georgia, Michigan, Pennsylvania and Wisconsin. In truth, however, Donald Trump won there and also won the presidential election overall.

An overly cheap visit to the hairdresser?

While Giuliani talked himself into a rage and sweat, small beads of sweat formed on his temple. They gradually turned into a trickle that ran down his cheek. This was all the more noticeable when the trickle turned dark. An image of black humor as an involuntary commentary on his tirades?

The content of the press conference was quickly no longer the topic of conversation in the USA, but rather the question of the origin of the dark sweat on Giuliani’s face. He dyes his hair black to look younger – and was the victim of a not very professional hair salon, was the first assumption.

No, no, contradict masters of the trade from Manhattan’s Upper East Side in the “Style Section” of the “New York Times”. Hair dye does not lead to such drops of sweat. It is certainly not left in its raw form on the head after application, because this would attack the scalp, damage the hair or lead to hair loss. Hair dye is washed off. And get the hair dried.

Giuliani probably noticed shortly before the performance that his sideburns look grayer and lighter than the rest of the hair on his head. And then he or someone from the team did not use hair dye, but instead used a black makeup stick and touched up the surface. This color would dissolve when mixed with sweat.

A role model as mayor after the terrorist attack

If you want to avoid Giuliani’s mishap, according to the Figaros’ advice, you have to dye, wash and dry in good time. And avoid exposure to heat when makeup is applied to the surface, be it from the sun’s rays outdoors or TV spotlights indoors.

The scene looked like an illustration of Rudy Giuliani’s changes. He was once a respected moderate Republican. In New York he was considered a hero. As mayor, he had significantly reduced the crime rate and given the city confidence after the terrorist attack on the Twin Towers on September 11, 2001. At that time they called him “Americas Mayor”: a role model for the Lord Mayor.

And today? Many see Giuliani like a clown. Trump’s clown. And kneebiter in the election contestation. Who wants to make reality look different by applying superficial makeup. And even that fails …

These were the details of the news Rudy Giuliani’s descent: Once New York’s hero – today Trump’s clown politics for this day. We hope that we have succeeded by giving you the full details and information. To follow all our news, you can subscribe to the alerts system or to one of our different systems to provide you with all that is new.

PREV Aid group: Syrians could be displaced for years to come
NEXT UN calls for safe release of trapped protesters in Yangon