Barack Obama at Markus Lanz: “You suddenly sleep in a museum” 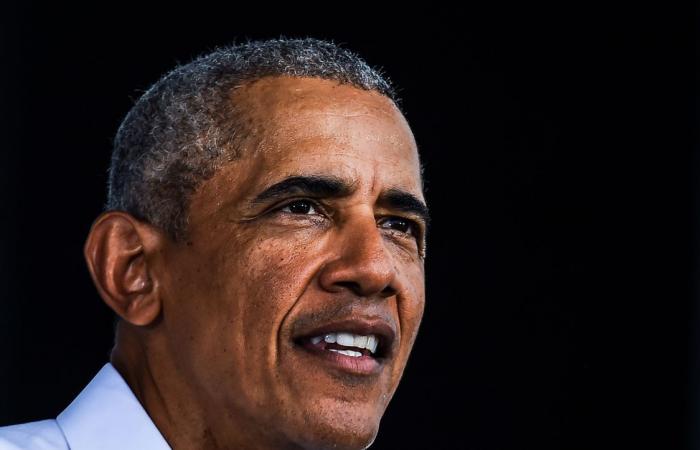 Lanz is unusually unsure of body language during the introductory small talk (“Hello, Marcus!”). He smooths his pants, groping for the existence of his chair and doesn’t know what to do with his hands. That may blame him for anyone who has never been in a comparable situation. Especially since Lanz will spend the next half hour, also unfamiliar, without the button in his ear – and thus without directing.

The setting is emphatically neutral. An empty conference room with an empty couch in front of the pale curtained windows, a stained rug under a low ceiling, presumably coffee from the Massachusetts endocrinologists’ buffet that had previously been hastily cleared. But then he will remain the only flaw in this encounter.

In the introductory small talk, Lanz jokes about the security of the room and Obama praises the visitor in return: “I heard you have a wonderful audience.” Lanz reciprocates with the joke that he thinks the book is “a bit short, only 1018 pages!” Obama admits that he would like to be able to keep it shorter.

Lanz wants to know what he will do if the former president ends up selling fewer books than his wife. In the answer he fires the next gag, whether Obama will recognize the result of this count. After this double blow at the latest, “the wonderful audience” will recognize his Lanz again. And Obama definitely knows who he’s dealing with.

Or thinks you know. After all, that is exactly the method with which Lanz actually became the best talker on German television. Fly in low, ask soft questions, make people, lull the visibly relaxed victim with kindness bordering on the greasy – and then strike.

So how did Obama experience election night? Wasn’t his presidency a revolution? What to expect from Biden And what was easier for him, moving into or out of the White House? Can you see the snipers on the roofs?

“This is the people’s house”

Obama remembers, chats, speaks to the German audience about Biden as a transatlantic, and when he moved in he found several crises, the collapsing financial system, wars in Iraq and Afghanistan. It is too hard for Lanz and too early: “And emotionally?” He would rather know now. How did it feel to suddenly be US President?

Obama remembers the first night and the realization: “This is not my house, this is the people’s house, you are suddenly sleeping in a museum”. How did he explain this to his daughters? They were still young enough, explains Obama, and their rooms should “not look like Thomas Jefferson’s residence,” more like children’s rooms.

Lanz gives Obama the opportunity to portray himself as a person who suffers more from the loss of his anonymity than he would be happy about his prominence. He can also be a father who is happy that his years in office have remained without long-term consequences for his daughters. That might sound strange, Obama muses. “I fully understand!” Assures Lanz and increases the temperature.

“America spends so much money” on wars, he begins, a whopping “500 dollars a day.” Obama corrects with a laugh, “500 million!”, But Lanz is already on the way to what is perhaps the sore point of this presidency. He wraps his question in wrapping paper with a bow of compassion. Didn’t he, Obama, have had “sleepless nights” because of these drone attacks? Because people were dying all the time «.

Obama speaks about the weight of his decisions and his own fallen soldiers before taking up common places. Even justified wars are “always a tragedy.” He had “had sleepless nights” at one point, although he was sometimes very tired. At home in the studio and with a button in his ear, Lanz might not have let his conversation partner off the hook so easily.

Instead of drones, he is now talking about Donald Trump and his old fairy tale that Obama was not a born American. The former president admits that he did not take these “ridiculous allegations” seriously enough and did not expect the media to take them seriously.

At the same time as the “political circus” with Trump in the front row at the “Correspondent’s Dinner”, Osama bin Laden had been accessed, Obama emphasizes, and he wanted to rave about the Navy Seals when Lanz, fortunately, interrupted him abruptly: “And at the same time this enormous social one Divide in your own country! ”Was Trump the answer?

Obama says there were problems before Trump and there will be after him. Progressive forces primarily need “better answers” for those left behind in the countryside, those who have not benefited from globalization. So people for whom Obama is “the Antichrist”, as Lanz interjects: “How did you talk to Michelle about it?”

How much you missed being able to speak like that

In the meantime, however, Obama has seen through the trick and is now brushing aside the humane question like something annoying. He prefers to talk about a divided society, a fragmented media world, further atomized by social media. There was no longer any fundamental consensus on facts. What should be done on the basis of the facts is still a matter of debate. But if the climate crisis or the pandemic were to be fundamentally questioned, this discussion would be deprived of the ground.

And the way he speaks like that, you notice how much you’ve missed in recent years that someone can speak like that. In coherent sentences, considering, also doubting, empathic, analytical and charming. How beneficial that is. And that Markus Lanz can do just that with his benevolent lurking conversation, which is less of an interview and more of a talk.

“How did the fact,” he wants to know at the end, “that you were surrounded by women all your life, shape your character?”

“For the better,” says Obama and laughs.

*The article has been translated based on the content of Source link by https://www.spiegel.de/kultur/tv/barack-obama-bei-markus-lanz-du-schlaefst-ploetzlich-in-einem-museum-a-f263d55d-ef87-469c-b91d-aa1deec08191
. If there is any problem regarding the content, copyright, please leave a report below the article. We will try to process as quickly as possible to protect the rights of the author. Thank you very much!

These were the details of the news Barack Obama at Markus Lanz: “You suddenly sleep in a museum” for this day. We hope that we have succeeded by giving you the full details and information. To follow all our news, you can subscribe to the alerts system or to one of our different systems to provide you with all that is new.