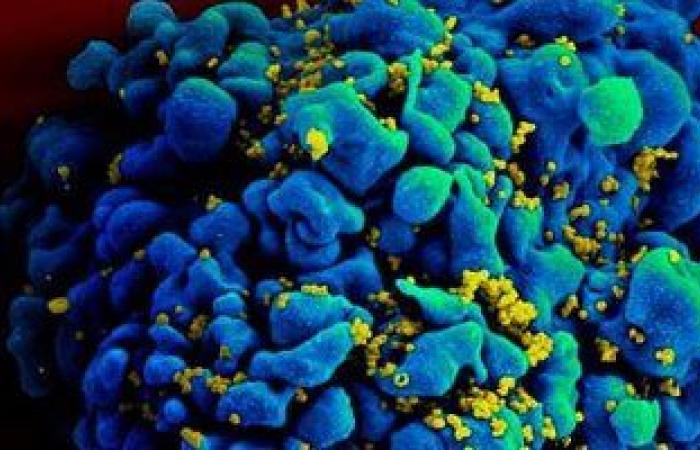 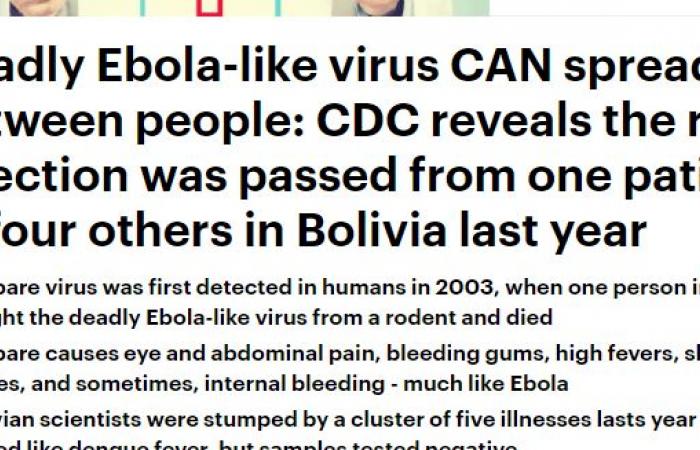 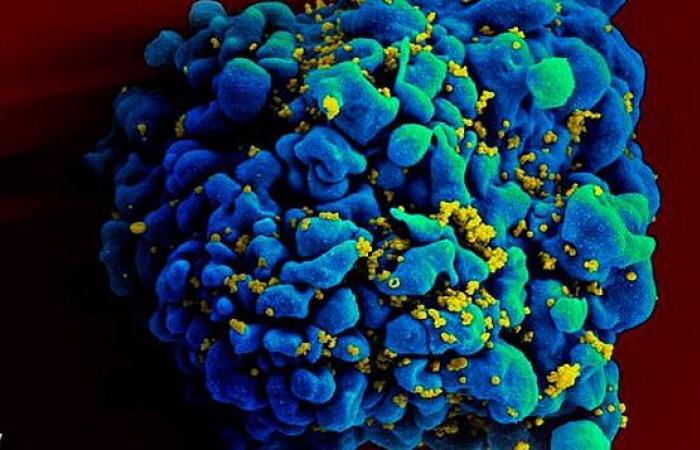 The British newspaper “Daily Mail” revealed that a deadly virus similar to Ebola can spread among people, as the American Center for Disease Control and Prevention warned that the rare infection had passed from one patient to 4 others in Bolivia, South America, last year, and the “Chapar” virus was discovered. For the first time in humans, in 2003, when a person in Bolivia contracted the deadly Ebola-like virus from a rodent and died.

The newspaper added that infection with the Chapar virus causes high fever, abdominal pain, bleeding in the gums, eye pain and a rash, with the additional confirmed cases of Chapar virus, there were only 6 known cases so far, after the initial case, nearly two decades ago, The virus appeared to have disappeared, but last year, a hospital near La Paz, the capital of Bolivia, contacted investigators from the Center for Disease Control and Prevention, who had a strange set of diseases and suspected dengue fever, a disease transmitted by mosquitoes in the tropics.

Like Ebola, it can cause abdominal pain, nausea, pain behind the eyes, joint and muscle pain, and if it progresses to a more severe form, it causes life-threatening internal bleeding.

And one case was reported in the Bolivian province on which the disease was named in 2003 after it was transmitted from animals, apparently through rodent bites or scratches to humans, but now the CDC has confirmed that it appeared again in 2019 and spread from a patient. One to 4 others, 3 out of a total of 5 cases proved fatal.

CDC officials said they have noticed that hemorrhagic fevers like Chapare, Ebola, are rarely spread widely because they have immediate and obvious symptoms and often, unfortunately, become fatal before they have a chance to spread.

Most of the people who died in the 2019 outbreak were not from random, untraceable contacts, but health care workers who had to interact with the infected person while they were in their care, the newspaper said.

But when the Bolivian scientists tested samples from the 5 patients, they were found to be completely negative for dengue, as well as for a whole host of other infections present in the area including other hemorrhagic fever and yellow fever. 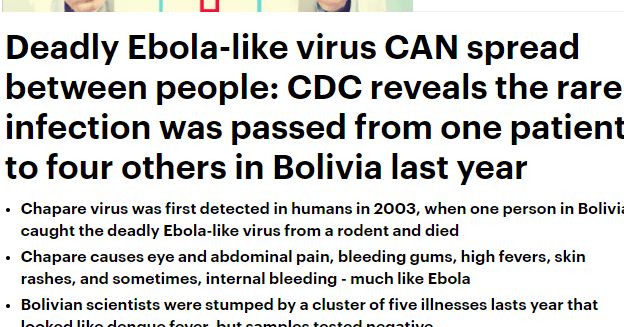 The newspaper pointed out that the CDC took each of the five samples on parts of the genetic material of the Chapar virus. CPR is on the way to the hospital, allowing the virus to travel through body fluids.

The excrement of rodents found near the home of the first late patient also contained the virus, indicating the path that the virus passed from animals to humans.

One patient who survived still had detectable levels of Chapare in his semen, 168 days after catching it. 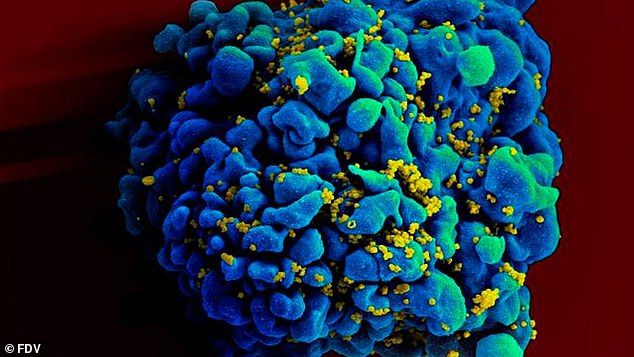 The center said that the results are frightening for two reasons: The virus can spread from one person to another, the method of transmission that allowed the Corona virus to turn into a pandemic and can continue, at least in small quantities for a long time, so far, 4 out of every 6 people infected with Shabar have died.

While this makes the virus more deadly than the coronavirus, it also means that the virus has a lower chance of spreading, it is also a highly symptomatic disease, and symptoms appear almost immediately after infection, this is the opposite. Corona VirusIt is estimated that 40% of cases do not show symptoms.

These were the details of the news The US Center for Disease Control warns of the deadly “Chapar”... for this day. We hope that we have succeeded by giving you the full details and information. To follow all our news, you can subscribe to the alerts system or to one of our different systems to provide you with all that is new.