The scarecrow had to throw on the mask. – Innocent fun!... 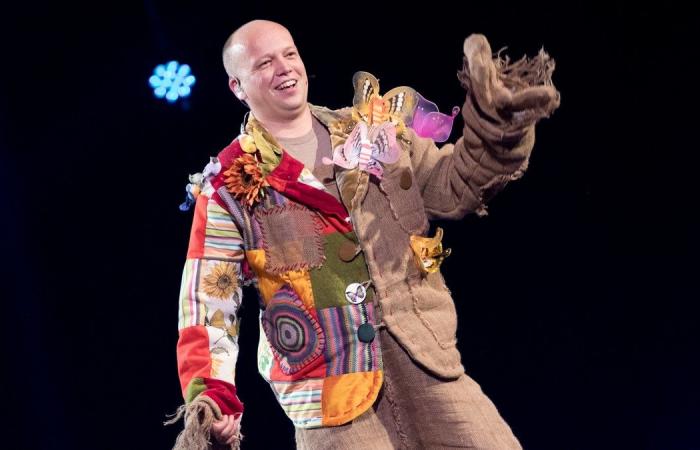 – I was a little skeptical about whether I should do this, but then I asked my daughters, and they thought I should do it, says the Center Party leader.

– It became a kind of family project. I have sung in the car and the shower and just decided to sing with the voice I have.

– But it has been a lot of fun, but now my daughters will probably be upset. They have been good singing teachers.

What do you think your party colleagues will say about this?

– They will probably think that it’s just fun. I do not have the best singing voice right then. But this has been innocent fun and definitely worth it.

And can one now expect more song from the politician?

– I can promise you that my singing career on nationwide TV is over, he concludes with a laugh.

Nicolay Ramm was the one who managed to guess correctly. 23% of the viewers at home also managed it.

– You get so confused by the stuff here. You can become the clergyman by not knowing.

The panel still thinks there were many diffuse hints throughout the evening.

Ravn says that she has become even more confused when friends and acquaintances have sent her tips on who can hide behind the masks.

Six anonymous celebrities remain, and can get ready to perform a new song next Saturday.

The poodle was not allowed to stand on the stage with the other participants tonight. He had to be quarantined after being called by the infection tracking phone this afternoon.

The other participants behaved as normal.

It is the participant who receives the fewest favorite markings from the audience who has to take off his mask and leave the program.

See the performances and the detective panel’s reactions here:

The panel did not quite hit the mark last on who this could be.

– Now I have to get you on the ground again. When I’m surrounded by the best birds, I’m in my ace. And I have been with more than most in this branch, says the mysterious raven.

She comes with an extra hint that she has won gold and participated in several Olympics.

– This came to me from above now, this is a lady who does winter sports. I have two words: Helene Olafsen, says Jan Thomas.

The moose says he loves to entertain and starts his performance at a piano.

– I have been out one main night before, and stepped up the road for many others. It’s not long since you saw me on my home court

– This must be TT, “Tafse-Truls”, my friend Einar Tørnquist, says Jan Thomas.

– I think we should rather switch to an entertainer, so I guess Marcus Bailey, Ramm guesses.

Both Ramm and Ravn throw in John Carew as a possible proposal.

-Even though I have been put in a stall, I have gone my own way. I have worked my way up from the floor, are some of the hints from the troll.

– I do not want to sit down, it is shouted from Jan Thomas.

– This must be an artist, says an enthusiastic Ravn.

This is the extra hint from the troll.

– But then I know who it is, says Ravn She has participated in Star Wars and Grand Prix. She has also been my chorister. This is Ulrikke Brandstorp, says Ravn.

The Viking says that it is a childhood dream that has come true to be part of Maskorama.

– I grew up in a home with a lot of support. I think the family is proud of how I have made my dreams come true.

– My festive tones have been flowed more times than there are inhabitants in Norway, is the Viking’s extra hint.

The panel believes that this must be a multi-talent. Ramm thinks this is a person from the gaming world and suggests the FIFA streamer “Randulle”.

– I think this could be Thomas Hayes, Ravn guesses.

– It was nice to be able to use his voice again.

– I am concerned that we all have a common responsibility, and that together we put out this fire we are up to. I have both stood in the king’s clothes and sung in a choir, are some of the scarecrow’s hints.

The panel rises to dance to the scarecrow’s song.

– I consider this person to be the family. I have dreamed of the scarecrow. This is a person who in his time was a little misunderstood, this is Petter Pilgaard, says Jan Thomas smiling.

Ramm believes that they are going to the world of politics and suggests that this must be host Fredrik Solvang. But locks his answer on the Center Party’s leader, Trygve Slagsvold Vedum.

6. Enhjørningen – «California Dreamin» (The Mamas and the Papas)

– I have always been concerned with exercise and health. I have worn out my share of horseshoes, and I love what I do, says a sparkling and bow-decorated unicorn.

She adds that she has ridden land and beach in our country.

Jan Thomas rises to a royal greeting. He still has no doubt that this must be Princess Märtha Louise. He simultaneously gives her six dice rolls for the outfit and asks everyone on the panel to stand up for the unicorn.

– Just to tone it down a bit, I think we’re going to an old singing legend. This is always eternal young Inger Lise Rypdal, says Ramm.

I have always dreamed of unicorns, the unicorn adds as an extra hint.

These were the details of the news The scarecrow had to throw on the mask. – Innocent fun!... for this day. We hope that we have succeeded by giving you the full details and information. To follow all our news, you can subscribe to the alerts system or to one of our different systems to provide you with all that is new.