Stances rejecting the attack on the Byblos Mosque: to cut off... 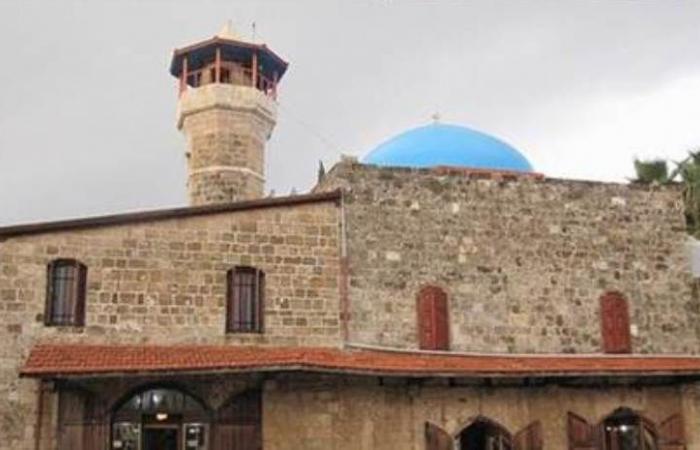 The incident of the attack on the Sultan Ibrahim bin Adham Mosque in Jbeil, where a group of people entered the mosque’s campus yesterday, attacked the muezzin with beating and insulting.

The positions rejecting the attack and calling for the valley of sedition are followed.

Derian: The investigation into what happened is based on the matter

A statement issued by the media office in Dar Al-Fatwa clarified that “the Mufti of the Lebanese Republic, Sheikh Abd al-Latif Derian, is following up on what has been published on some media outlets and social networking sites about an attack on the Jbeil Mosque by some of the young men who have been beating the muezzin.” The state “investigates what happened in order to build on what is required of it.”

The Maronite Diocese of Byblos: Byblos will remain a city of coexistence

The Maronite Archdiocese of Jbeil, in a statement distributed by the media official in it, the priest Antoine Atallah, expressed its condemnation of what happened in front of the chapel of Imam Ibrahim bin Adham, stressing that “Byblos will remain a city of coexistence that did not vibrate in the darkest days of the sinister Lebanese war.”
The statement pointed out that the Archbishop of the Archdiocese, Archbishop Michel Aoun, affirmed with the Muslim authorities in Jbeil, “to preserve the unity of the people of the city.”
The Archdiocese concluded her statement: “God protected us from the evil of sedition and inspired us with wisdom and awareness, to prevent any exploitation of the accident that harms the coexistence of all the people of Byblos and affects its cultural image.”

Byblos Municipality: Not to be drawn into the seditions that some try to sow

The municipality of Jbeil-Byblos condemned in a statement today, “the attack on the Sultan Ibrahim bin Adham Mosque in Jbeil, by a group of young men, and the competent security authorities have kindly taken swift measures against them.”

She said: “It concerns our municipality, alerting citizens in Byblos and all regions, not to be swept away by the strife that some are trying to sow, and we ask you to arbitrate rational minds from all sides trying to undermine and tamper with the formula of coexistence in the city of Jbeil, the capital of dialogue and solidarity among its people from the sects.” all”.

Hariri: The attack on the mosque is unacceptable

In the positions also, the Prime Minister-designate Saad Hariri stressed that the Jbeil Mosque is one of the religious and historical monuments of an ancient city that has a distinctive position in moderation, openness and coexistence, considering that the attack on the mosque is an unacceptable assault on civil peace and the values ​​that Byblos represent.

Hariri emphasized that our confidence in the judiciary after he became the main suspect in the custody of the security forces, and our greatest confidence in our people in Jbeil, the city of one’s livelihood and national unity.

The families of the Sunni community in Jbeil: Converting individual problems into sectarianism is a drag towards sedition

And the families of the Sunni community in Jbeil considered that turning individual problems into sectarianism was a drag towards sedition.

Kurumi: To extinguish discord from its cradle

The head of the “Dignity Movement”, MP Faisal Karami, tweeted through his account on “Twitter”: “The attack on the Sultan Mosque in Byblos is a malicious act carried out by Motoron and aims to invoke a hateful sedition, which is required and quickly extinguished it in its infancy. The concerted efforts of spiritual references in condemning and rejecting extremism and protecting the one life that characterizes Lebanon. “

Mikati: To surround the tails of the attack with a common Christian-Islamic position and to prevent its exploitation

And President Najib Mikati contacted the religious and security authorities to follow up the case of the attack against the Sultan Ibrahim bin Adham Mosque in the city of Jbeil.

Mikati stressed “the necessity of encircling the tails of the attack with a common Christian-Islamic stance and preventing its exploitation, because Lebanon is unable to endure more strife and crises.”

The scholar Mr. Ali Fadlallah:To cut off the path to any sedition sought by invisible hands

The scholar Sayyid Ali Fadlallah tweeted on his own account on “Twitter”: “We strongly condemn the attack against the Sultan Ibrahim bin Adham Mosque in Jbeil, and we condemn any attack that occurs against any religious edifice or site, and we call on the security authorities to expedite detection of the perpetrators and instigators and punish them. To cut off the road to any sedition sought by the hidden hands of the rhythm among the Lebanese, especially in the city of Byblos, which represented and continues to represent a model for coexistence and the encounter between religions and sects.

These were the details of the news Stances rejecting the attack on the Byblos Mosque: to cut off... for this day. We hope that we have succeeded by giving you the full details and information. To follow all our news, you can subscribe to the alerts system or to one of our different systems to provide you with all that is new.