A newspaper reveals the role of a Syrian prime minister in... 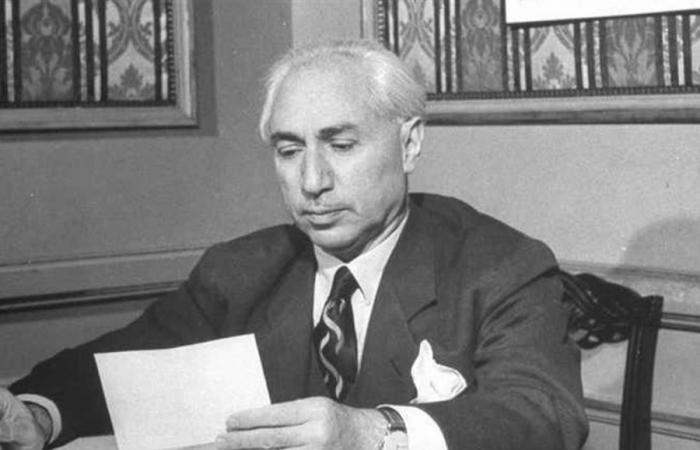 The Israeli newspaper “Haaretz” published a lengthy article by the Israeli researcher, Meir Zamir, in which it revealed that the late Syrian Prime Minister during the French Mandate era, Jamil Mardam Bey, provided “important and decisive” information that he transmitted to the leader of the Zionist movement, then Ben-Gurion, and helped later Upon the establishment of the State of Israel in the year 1948.Although Jamil Mardam Bey is considered in the collective Syrian memory one of the heroes of the independence of Syria and one of the “founding fathers” of the Republic of Syria, researcher Zamir confirmed that this veteran Damascene politician was a “double agent” who cooperated with the Jewish Agency during his work as Syria’s ambassador and delegate to Cairo At the Arab League in 1945.

According to the documents that Zamir talked about in his article, Jamil Mardam Bey’s recruitment began in the summer of 1945, after French intelligence information revealed that the Prime Minister of Syria under the French mandate had been recruited by the head of British intelligence in the Middle East, Ilted Nicole Clayton, and then Iraqi Prime Minister Nuri al-Saeed.

According to the article, Mardam Bey dreamed of establishing a Greater Syria that includes Syria, Iraq and Jordan under the rule of King Faisal Ibn Sharif Hussein, while he would be the Prime Minister. However, the French decided to blackmail Mardam Bey after they threatened him with leaking documents in their possession to his political opponents, which led to his resignation in August 1945, after consulting with Britain, which did not know that he had become a double agent.

The newspaper “Haaretz” indicated that Mardam Bey had provided the French with valuable information on the intentions of the British army and intelligence services in the Middle East.

When Mardam was appointed as Syria’s ambassador to Egypt and its representative at the headquarters of the Arab League in Cairo, the French faced difficulty in blackmailing him and exploiting him without raising suspicions. Therefore, they resorted to recruiting the head of the Arab section of the political department in the Jewish Agency, Eliyahu Sasson, in order to transmit the important information in the possession of the Syrian ambassador to Paris.

What helped facilitate Sasson’s mission was that he was of Syrian origins and had a good relationship with Mardam Bey since 1937, and Ben-Gurion appointed him in the Jewish Agency to coordinate cooperation with French intelligence.

The documents indicate that on November 12, 1945, Sasson met Mardam in Cairo, before doing so again 6 days later, when he visited Jerusalem Mardam at the head of the Arab League delegation to arrange for Palestinian representation in the university.

After these meetings, Ben-Gurion met with Sasso, and in the diary of November 22), details related to the Jewish Agency official’s conversations with Mardam.

According to the documents, this is one of the few occasions when Mardam can be directly identified as an intelligence source for Ben Gurion, who later became the first prime minister of the State of Israel.

In the years that followed, both French intelligence and Sasson concealed by various means the fact that Mardam was the source of the information, in order not to be revealed.

However, the information first disclosed in the diary of Maurice Fischer, an intelligence officer at the Free French Forces military headquarters in Beirut, who previously served in the Haganah militia before the establishment of the Israeli state, and later became the or ambassador of Israel to France, is further evidence That Mardam was an important source of information for Ben Gurion.

In his memoirs, Fischer explained that Mardam revealed a secret Anglo-Iraqi plan to establish the so-called Greater Syria for agents from the Zionist movement in a meeting in Cairo.

The report of the Israeli researcher indicated that Ben-Gurion had been preparing since July 1945 for the possibility of an attack by the Arab armies in the event that Israel declared its independence, but the information received by Mardam diverted attention to another direction, as Ben-Gurion learned that the direct threat to the establishment of Israel does not lie in an attack Probably from neighboring Arab countries, but in British plans to thwart the establishment of the Arab state

This was evident by declaring the “Haganah” militia a terrorist organization, and seeking to implement the “Greater Syria” plan, whereby a Jewish entity would be established with limited powers in it and not an independent state.

According to information that Mardam Bey conveyed to Ben-Gurion, the Arab leaders, who feared a Soviet intervention, were determined to stand by the United Kingdom in the event of an all-out war between Britain and the Soviet Union on the lands of the Middle East.

In the end, according to “Haaretz” newspaper, he was free to thwart the idea of ​​”Greater Syria” by the efforts of the then Saudi monarch, King Abdulaziz bin Saud, who considered it a threat to his country, and he managed to do so after he obtained the support of US President Harry Truman.

On July 14, 1946, London had no choice but to accept that it did not support the establishment of the Greater Syria project. Nevertheless, British intelligence continued its efforts to establish Greater Syria as the rule of the Hashemites (members of the family of Sharif Hussein bin Ali), in order to be part of a regional alliance against any Potential Soviet threat.

According to the Israeli newspaper, the information that was transferred from Mardam Bey to David Ben-Gurwin was very important, noting that the events that occurred in 1946 confirmed the accuracy of this information regarding Britain’s intentions

And in May 1946, the head of British intelligence in the Middle East, Alted Clayton, had begun cooperation with the Secretary of the League of Arab States, Abd al-Rahman Azzam, following a meeting of Arab leaders at the Inshas Palace in Cairo, where the decisions of the conference confirmed for the first time that “Zionism poses a danger. To all Arab countries. ”

A second meeting of the League of Arab States Council was held in June in the resort of Bludan near the Syrian capital Damascus, where “secret decisions” were issued stipulating the necessity of a military confrontation with the Zionist movement and supporting the Palestinians with money, weapons and manpower.

Mordam Bey and Sassoon attended that meeting, who later returned to Jerusalem with information on the secret decisions.

Subsequent moves by the British army and secret services confirmed the Mardam information. On June 29, 1946, in what was known as “Operation Agatha” – or “Black Saturday” in Hebrew – units of the British Army arrested the leaders of the Jewish Agency, particularly the head of foreign policy Moshe Sharett, and confiscated files at the agency’s headquarters in Jerusalem.

And raided a large number of kibbutzim in search of prohibited weapons. The real aim of the operation was to disarm the Haganah and replace the “extremist leadership” – first and foremost, Ben-Gurion – with more moderate figures.

The British operation failed to a large extent, as its details were leaked to the Haganah leadership two months ago, while Ben-Gurion escaped arrest, as he was Paris at the time.

The British also tried to find evidence of French support for the Zionist movement – the Eliyahu Sassoon files were among the first they seized – but they found nothing that would suggest this.

In December 1946, Clayton forced Syrian President al-Quwatli to dismiss Prime Minister Saadallah al-Jabri for his role in thwarting the Greater Syria Plan, and replaced him with Jamil Mardam.

The aim of this step was to enable Mardam to secure a parliamentary majority for the plan, but Mardam began to distance himself from the British – despite the fact that British intelligence continued to consider him a reliable agent.

Mardam’s return from Cairo enabled the French to administer it directly without the mediation of Sassoon. In the summer of 1946, France established diplomatic relations with Syria and established a consulate in Damascus in which intelligence agents operated under diplomatic cover. These actors were able to meet Mardam in their official capacity without arousing suspicion.

However, after the failure of the British efforts to solve the problem of the Jews in Palestine by force, the task was imposed on the Arab armies. I describe this phase, which began in August 1947 and reached its climax in the May 1948 war.

Following the defeat of the Arab states in the 1948 war, winds of political, social and economic turmoil swept through the old regimes in Syria, Egypt and Iraq.

Jamil Mardam was one of the victims of the unrest in December after a severe political and economic crisis in Syria, where he was forced once again to resign from his post to spend the rest of his life in Cairo until the date of his death in the world 1960.

In February 1947, Ben Gurion met in London with the British Foreign Secretary, Ernest Bevin, and praised Mardem as a moderate Arab leader.

These were the details of the news A newspaper reveals the role of a Syrian prime minister in... for this day. We hope that we have succeeded by giving you the full details and information. To follow all our news, you can subscribe to the alerts system or to one of our different systems to provide you with all that is new.