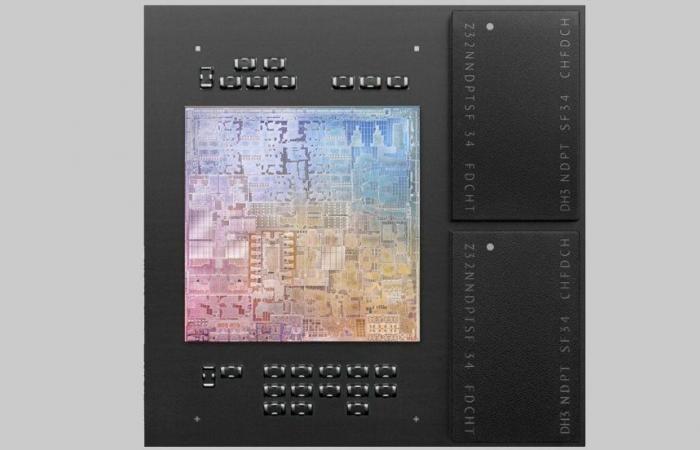 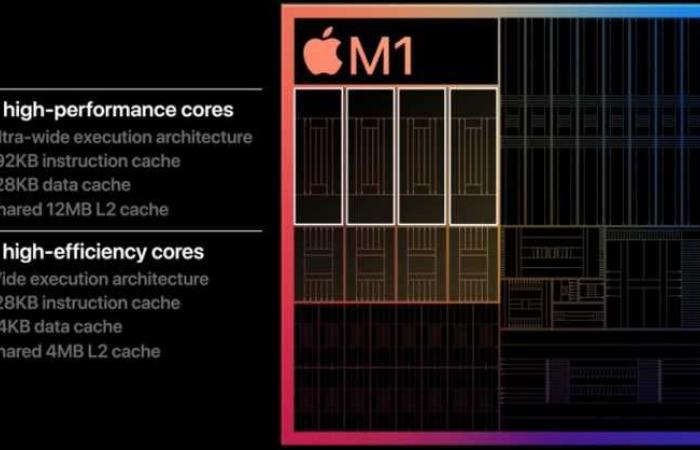 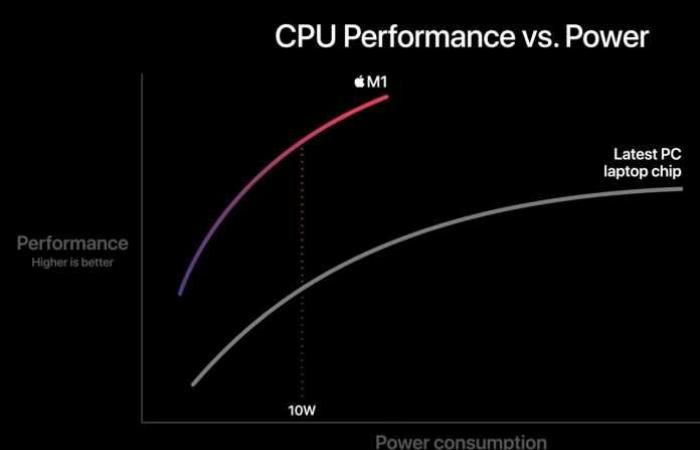 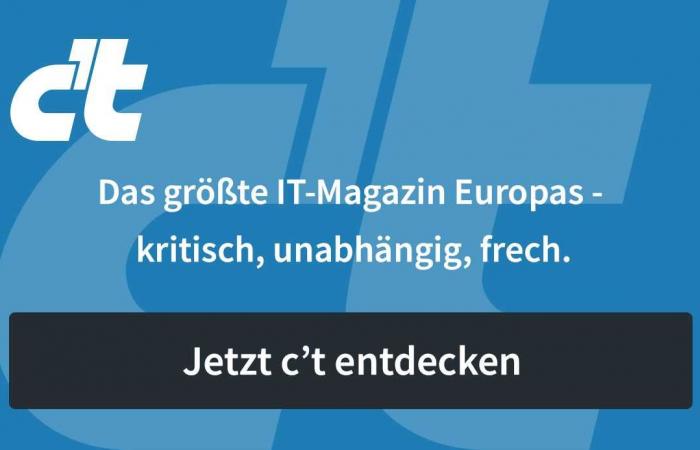 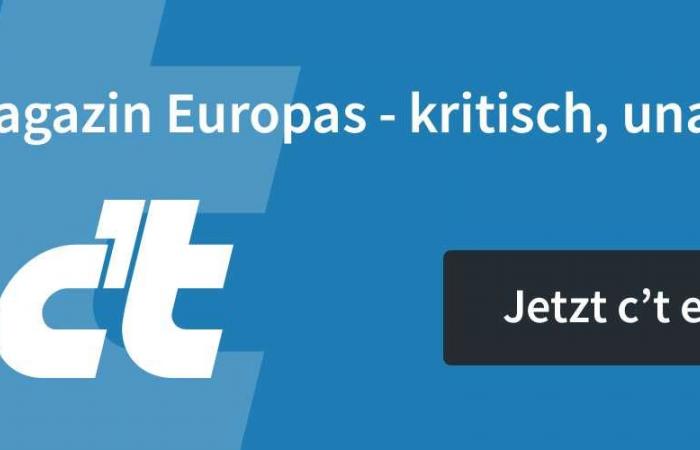 Apple has made very full-bodied promises about the performance and efficiency of the new system-on-chip M1, but has not published any common benchmarks. The first results in Geekbench 5 have now appeared, which show the M1 in multi-core performance clearly ahead of the currently fastest x86 mobile processors with 15 to 30 watt TDP, i.e. Intel Core i7-1185G7 (4 cores) and AMD Ryzen 7 Pro 4750U (8 cores). But findings on the Apple A14 from the iPhone 12, which is closely related to the M1, reveal more about the M1 technology.

According to Apple, the M1 contains eight computing cores, a GPU with eight cores or shader clusters as well as a neural engine with 16 cores for AI and machine learning algorithms. The GPU can also be used as an accelerator for some computing tasks.

The M1 system-on-chip (SoC) also contains controllers for I / O interfaces (Thunderbolt / USB4, PCIe 4.0) and functions that were previously handled by the separate T2 security chip with built-in SSD controller, including a Secure Enclave (SE) . The latter is important for biometric authentication (Face ID, Touch ID) and payment functions.

The M1 also has a RAM controller that connects up to 16 GB of memory, presumably with two 64-bit channels for LPDDR4 or LPDDR4X.

An internal “fabric” links the individual function blocks and an additional cache that intercepts memory accesses. The CPU cores are divided into two groups, each with its own L2 cache. Each individual CPU core, in turn, has an L1 cache, as is customary with x86, separately for instructions, abbreviated L1I, and data (L1D).

The M1 has four particularly powerful and particularly efficient CPU cores. Apple has not officially confirmed it, but experts say the code names for the strong cores are “Firestorm” and the more efficient cores are “Icestorm”.

According to Apple, each Firestorm core has 192 KByte L1I cache and 128 KByte L1D cache. These data buffers are much larger than for example Intel’s current “Tiger Lake” CPUs (48 KByte L1I / 32 KByte L1D) and AMD Zen 2 (32 KByte each). However, the x86 processors also have so-called micro-op (µOP) caches, which work particularly efficiently.

Apple’s different ARM core groups can each still access a shared L2 cache: The four Firestorms on a total of 12 Mbytes, the four Icestorms on 4 Mbytes. In addition, there is the fabric cache, the capacity of which Apple has not revealed and which, from the point of view of the CPU cores, serves as an L3 cache.

The “Apple Silicon” A14 Bionic is very similar to the M1 and has as many efficient Icestorm cores as well as a Neural Engine with 16 cores. The A14 only has two strong Firestorm cores with a smaller L2 cache (8 MB) and a GPU with 4 instead of 8 cores. In addition, the arithmetic units in the A14 are generally clocked lower because it can dissipate less heat in iPhones and iPad Air 4 and draw less battery power than in Macs.

Apple does not reveal nominal clock frequencies of the A14 and M1, and neither does the Thermal Design Power (TDP). The latter is usually around 5 watts for smartphone SoCs like the A14, but even then a smartphone would become very hot in the long run and an 11 watt-hour battery (3.7 volts / 3000 mAh) would be empty in barely more than 2 hours. On average, the power consumption of the chip is much lower, especially since the display usually needs more energy and the modem also consumes electricity.

When introducing the M1, Apple made comparisons with other chips at 10 watts – so it is probably between 10 watts in the MacBook Air without a fan and 15 to 20 watts with fan cooling. Processors of the “U” classes from AMD and Intel have a TDP of 15 to 28 watts, but here too the quality of the cooling system of the respective notebook manufacturer is crucial. These processors can be set in a wide range via configurable TDP (cTDP) and then deliver more or less computing power because they have to slow down quickly with sustained load. This also applies to the M1, as Apple explained at the launch: In the MacBook Pro 13 inch with fan, its sustained performance is higher.

However, results from the online database of the Geekbench 5 benchmark provide information on the clock frequencies of the A14 and M1. There, the value 2.99 GHz can be found for an A14 and a value of 3.2 in the M1 result from a fanless MacBok Air GHz. In a MacBook Pro 13 inch or Mac mini with a fan, the M1 may clock a little faster.

However, these clock frequencies are significantly lower than the turbo frequencies of the Core i7-1185G7 (4.8 GHz) and AMD Ryzen 7 Pro 4750U (4.1 GHz). For higher clock frequencies, both ARM and x86 cores require higher core voltages, which is associated with significantly higher power loss. The “wider” data paths are laid out, i.e. the more arithmetic units and transistors run with higher voltage and clock rate, the more the losses grow when clocking up.

The results that A14 and M1 achieve in Geekbench 5 are all the more impressive. In the single-core run, which certainly works on a strong Firestorm core, it is 1596 (A14) and 1732 points (M1). The M1’s lead of 8.5 percent is largely due to the higher clock rate; the larger L2 cache does not have a major impact.

Compared to a Core i7-1185G7 in an MSI notebook, the M1 is 23 percent ahead in the multi-core rating, and 7.5 percent faster in single-core. But there are also Geekbench 5 values ​​of a Core i7-1165G7 under Linux that show it is almost on par in single-core performance – but here it is much weaker in multi-core.

Intel’s Tiger Lakes, such as the aforementioned Core i7-1185G7 and 1165G7, only have four cores each and Simultaneous Multi-Threading (SMT aka Hyper-Threading), while all eight cores of the M1 work simultaneously – fast and efficient together. It is therefore interesting to compare it with the 15 watt notebook processor with the most powerful multithreading capabilities to date, the AMD Ryzen 7 Pro 4750U with eight cores and SMT, i.e. a total of 16 threads. But even that is around 15 percent behind Apple’s M1 in Geekbench 5 multi-core – because its Zen 2 cores deliver 33 percent less single-core performance than an Apple Firestorm at 3.2 GHz. With the Ryzen 5000U (Cezanne) with Zen 3, this could shift in 2021.

*The article has been translated based on the content of Source link by https://www.heise.de/news/ARM-Macs-Mehr-Details-zum-Apple-M1-4958755.html
. If there is any problem regarding the content, copyright, please leave a report below the article. We will try to process as quickly as possible to protect the rights of the author. Thank you very much!

These were the details of the news ARM Macs: More details on the Apple M1 for this day. We hope that we have succeeded by giving you the full details and information. To follow all our news, you can subscribe to the alerts system or to one of our different systems to provide you with all that is new.