Armenia’s concern for its historical, religious and cultural heritage located in... 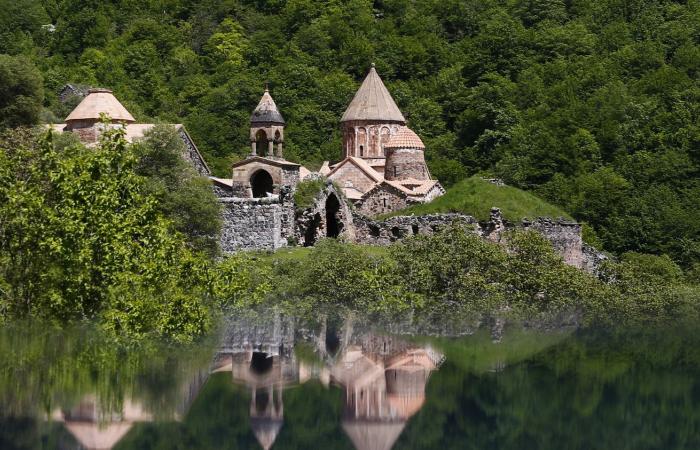 Armenia expressed concern Wednesday, November 11 for its historical, religious and cultural heritage in Nagorno Karabakh, after a ceasefire agreement consecrating the victory of Azerbaijan and ceding part of the territory of the enclave to it .

“We are currently uncertain about the fate of Artsakh’s cultural heritage” (Armenian name for Karabakh), Nariné Toukhinian, Armenian deputy minister of education, science and culture told AFP. Nothing is said about this in the peace agreement. But we know very well that we are dealing with those who hate everything Armenian “, underlined Nariné Toukhinian.

“We are extremely concerned because we have already seen the desecration and destruction of the khachkars (traditional Armenian ornate stone crosses) by the Azeris“, she accused.

“To protect our historical and cultural monuments, we must live there”

“Armenian priests will remain where the Armenian population remains. But it is unlikely that our clergymen will be able to remain in the territories ceded to Azerbaijan.”, she added.

Armenia signed on the night of Sunday to Monday a cease-fire agreement negotiated by Russia, enshrining the victory of Azerbaijan after more than seven months of bloody conflict. This agreement provides for the deployment of nearly 2,000 Russian peacekeepers in the coming days between the belligerents.

They will be deployed as Armenian forces leave the territories returning to Azerbaijan’s control – a total of seven bordering districts that had eluded it since the 1990s, and a small part of Nagorno Karabakh proper, with therefore a diminished self-proclaimed republic. and weakened.

Several monasteries of the Armenian Apostolic Church, including the millennial one of Dadivank, are located in areas that will return to Azeri control, raising many questions about the fate of this religious, historical and cultural heritage.

The Armenian Apostolic Church, which is very influential in the country, has not yet officially expressed itself on the issue. For the moment, contenting himself with calling on the Armenians to unity, his patriarch Garégin II nevertheless asked the authorities of Armenia and Nagorny Karabakh, after the signing of the agreement, to “immediately give comprehensible and convincing explanations to the people (…) on these decisions and their impact on the future of our homeland”.

In a tweet published on Wednesday, November 11, an Azerbaijani official claimed that Dadivank Monastery, which he names with the Azeri name of Khudavang, is “one of the best testimonies of the ancient Albano-Caucasian civilization”.

“The monastic complex of Khudavang was then occupied by the Armenian armed forces in 1992, and victim of alterations and falsifications to modify its origins and its character, in violation of the 1954 charter of Unesco“, assures Anar Karimov, Deputy Minister and Interim Minister of Culture.

These were the details of the news Armenia’s concern for its historical, religious and cultural heritage located in... for this day. We hope that we have succeeded by giving you the full details and information. To follow all our news, you can subscribe to the alerts system or to one of our different systems to provide you with all that is new.