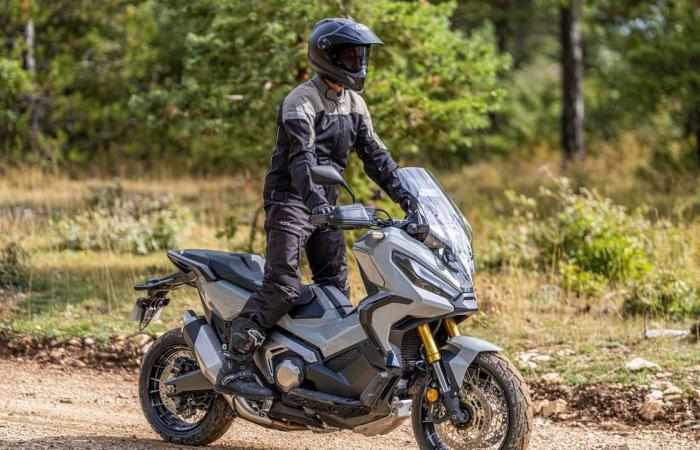 Four years ago, Honda broke new ground with the X-ADV. A mixture of adventure bike and scooter – that has never been done before. But the success has rewarded the courage, meanwhile the X-ADV has become a fixture in the model range and also on the roads (and Alpine passes).

For 2021, Honda is bringing its crossover scooter Now an astonishingly comprehensive update that not only affects the design, but also the hardware, the assistance systems and the functionality. But one after the other.

As usual, let’s start with the design: The dominant feature here is the new front, which is equipped with larger, more dynamic LED double headlights with striking LED daytime running lights. The windshield is also new and should offer even better wind and weather protection; As before, it is five times adjustable, the adjustment range is over 139 millimeters in height and 11 degrees in the angle of attack. Compared to the angular original shape, the 2021 vintage of the Honda X-ADV is clearly more fluid. However, this only applies to the front, the rest is still quite angular and martial, as you would like it to be in an adventure vehicle.

In terms of technology, the changes are profound – even the frame has been redesigned. On the one hand, they wanted to save weight, and on the other hand, they wanted to create additional space, for example to enlarge the storage compartment under the seat, which now measures 22 liters and houses a USB instead of a 12V charging socket. Bottom line, Honda said it was able to scrape off three kilos, but its own weight with a full tank is now 236 kilos, previously 238 … so that would only be two. But that won’t matter now.

Much has also been done with the engine, which is of course Euro 5 compliant. The changes correspond to those on the sister model, the also renewed NC750X: Optimizations not only significantly reduced emissions, but also found a few additional horsepower. An increase of 4 hp brings the maximum output to 59 hp; the maximum torque increases from 68 to 69 Newton meters. You should be able to feel that, especially since the first three gears of the DCT have been reduced to a shorter ratio in order to achieve even better acceleration. The upper three gears were again spread further to reduce the speed at higher speeds. This benefits consumption, as can also be seen from the official values: With an average of 3.6 liters, the Honda X-ADV was once again a tenth more economical. In conjunction with the 13.2 liter tank, theoretical ranges of up to 366 kilometers can now be achieved.

About the new features of the engine The electronic throttle now also counts (ride by wire). This means that five driving modes are now possible; the previous G button is no longer required. The riding modes are Standard, Rain, Sport, Gravel and User – the latter is freely configurable. This influences the gas characteristic, the engine braking effect, the traction control and the switching strategy of the DCT. The traction control now has three instead of the previous two levels and can still be switched off, with the DCT you can choose from four modes.

These functionalities are operated now has a five-inch TFT screen that replaces the previous LCD screen. The new on-board system can also be linked to the smartphone via Bluetooth, but a headset must also be used in order to be able to use all functions. “Honda Smartphone Voice Control System” is the name of this new network, which enables streaming of music or management of telephone calls.

Since the smartphone is now apparently indispensable on the scooter has become, it also has its own compartment in the right side of the front panel. The parking brake was originally located here; it can now be found on the right handlebar.

Another good news For shorter riders: According to Honda, the running boards have become a little narrower in order to shorten the step length. With the seat height of 820 millimeters remaining the same, it should be easier for your feet to reach the ground or have a secure stance.

In terms of equipment we also want to mention the standard keyless system, which optionally also automatically unlocks and locks a top case. Other extras include side cases, fog lights, heated grips and much more.

The new Honda X-ADV model year 2021 will be offered in four colors: red, black, silver and gray. The second generation of the adventure scooter will also be available very soon: it will be available from dealers as early as February 2021. The price rises moderately in view of the more on offer: 400 euros plus results in 12,990 euros in Austria. We will deliver a first driving impression as soon as possible!

These were the details of the news Honda X-ADV 2021 More power, more style, more riding modes for this day. We hope that we have succeeded by giving you the full details and information. To follow all our news, you can subscribe to the alerts system or to one of our different systems to provide you with all that is new.