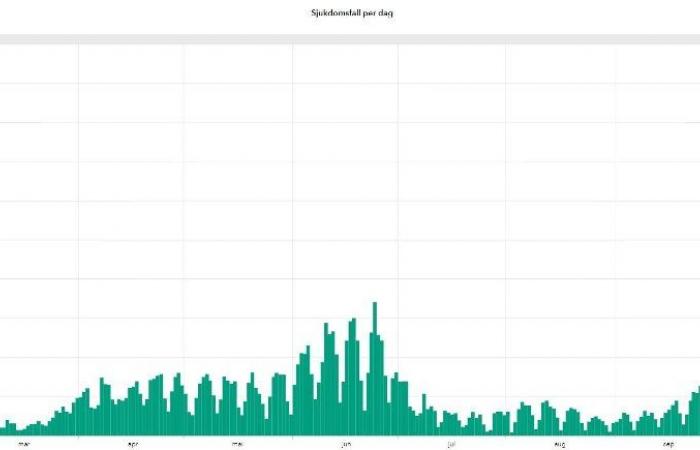 In four weeks, the number of new corona cases in Sweden has doubled. Mathematics professor Tom Britton has calculated what can happen.

– If we do not change our behavior, we can get up to half a million new cases of infection from the beginning of November to mid-December, says Tom Britton, professor of mathematical statistics at Stockholm University according to Aftonbladet.

He points out that the more people who are infected with covid-19, the more people end up in the intensive care unit and risk dying. This spring, Britton set up forecasts that the death toll in Sweden could reach between 6,000 and 14,000. As of today, Sweden has registered 6022 corona deaths. He estimates that the mortality rate is now 0.2 per cent, compared with 0.5 per cent this spring.

If the development of the infection continues as it is now, it could have major consequences, he warns.

– Around a thousand people can die until the New Year if we do not change our behavior now, he says to Aftonbladet.

According to figures from the European Infection Control Agency ECDC, Sweden is now in 20th place in Europe (EU / EEA and the UK) in infection rate. Figures from Sunday show 346.7 cases of infection per 100,000 inhabitants in the last 14 days. The Czech Republic, Luxembourg, Belgium, Liechtenstein and Slovenia are at the top of the list, all with insider numbers above 1,000. Norway is second at the bottom with 112.5 cases of infection per 100,000 inhabitants. Finland has the lowest infection rate. Here, the latest inside figure is 49.5.

These were the details of the news Coronavirus, Sweden | Mathematics professor: Sweden can get 1000 new... for this day. We hope that we have succeeded by giving you the full details and information. To follow all our news, you can subscribe to the alerts system or to one of our different systems to provide you with all that is new.