Trump wants to challenge Biden’s election – these are his chances 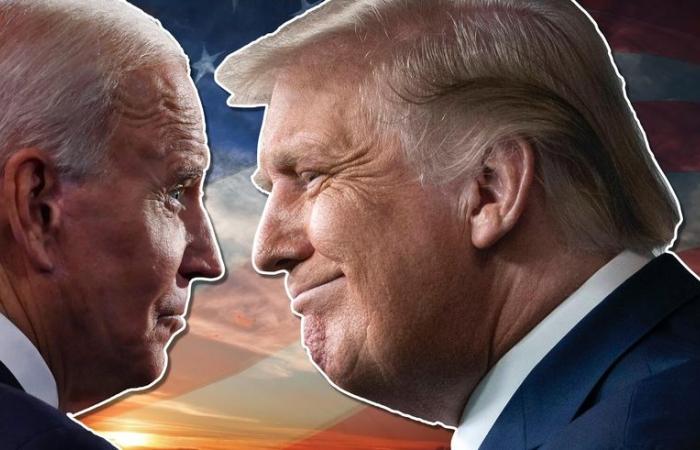 It seems rather unlikely that Trump could still win through the legal process. Image: imago / shutterstock / watson

Trump wants to challenge Biden’s election – these are his chances

It will be more than two months before Joe Biden’s planned assumption of office in January. Until then, a lot can happen – and if President Donald Trump had his way, the courts would intervene until then to prevent Biden’s entry into the White House. Trump and his Republicans have filed lawsuits in several states with tight results and want to demand recounts of votes. Biden’s lead in contested countries is sometimes quite small. So could his victory be overturned? It seems rather unlikely that Trump could still win through the legal process. An overview:

What is the role of the judiciary?

In the USA, complaints are always made quickly and a lot. In the vast majority of election years, when a candidate had a good head start, a lawsuit or two couldn’t affect the outcome of the election. In addition, courts cannot rule on the outcome of the election itself, not even the Supreme Court in Washington, the Supreme Court. Courts in the states or higher authorities can, however, decide on the legality of time limits, counting rules or the validity of certain results. Recounts, however, are carried out by the local electoral authorities.

How realistic is Trump’s hope?

If Biden’s election victory depended on a narrow result in one state, or two states, Trump might still have a chance. A judgment in his favor for the admission of some votes or the legality of deadlines and voting procedures could theoretically tip the result in a very tight state such as Georgia. The same applies to a recounting of votes, which is required in some places.

In the race to secure the necessary majority of 270 voters, Biden is now so far ahead of Trump that one or two successful lawsuits shouldn’t matter. If, contrary to expectations, Biden should lose a state because of a judgment or a recount, he would still have a sufficient lead over Trump based on the current state of the count. According to forecasts, he should ultimately secure around 300 votes.

Why is Pennsylvania so important?

The most dangerous thing for Biden would be to lose Pennsylvania to a legal battle. It is the largest controversial state that has 20 electors to allocate. Trump’s lawyers are therefore likely to make special efforts to protect the state. Among other things, they hope to challenge the result before the Supreme Court. Specifically, a lawsuit is pending there against an extension of the deadline for submitting postal voting documents due to the corona pandemic.

The Supreme Court did not overturn the extension immediately before the election, but reserved the right to negotiate the case in more detail after the vote. State Secretary Kathy Boockvar, who was responsible for conducting the election in Pennsylvania, said the postal ballot papers received after election day would be counted separately because of the lawsuit. It is about a few thousand votes that should hardly make a difference, she said.

Doesn’t Trump have the Supreme Court in his pocket?

Trump has a home advantage at the Supreme Court: six of the nine lifetime judges are considered conservative, three of whom the Republican nominated himself. Some complaints about the election had already landed with the judges before the vote, mostly about quite technical questions. One issue was, for example, whether a deadline for accepting ballots can be changed by a court or only by the parliament of the state concerned. In the judges’ decisions, there was no clear tendency towards party membership. The conservative judge Amy Coney Barrett, who was only appointed at the end of October, abstained from voting on several decisions.

But weren’t there any cases of electoral fraud?

Trump repeatedly complains about “massive electoral fraud”. Trump is angry that his election victory will be “stolen” and that he can only lose because of the dark machinations of the Democrats. But despite all the angry allegations, Trump has so far provided no evidence other than hearsay, so it should hardly have a chance in court.

The chiefs of electoral authorities in the contested states, including Republicans and Democrats, rejected Trump’s allegations. Prominent Republicans in Congress made similar statements. “He is wrong when he says that the election was faked, flawed and stolen,” said Senator Mitt Romney. “That harms the cause of freedom here and around the world.” Trump was weakening the institutions that formed the foundation of the republic and fueling dangerous anger, said the influential senator, known as a Trump critic.

According to experts and scientific studies, election fraud is extremely rare in the USA. According to experts at the Brennan Center think tank, only around 0.0025 percent of votes cast in polling stations were fraudulent in the polls examined, and even less in postal votes. It was statistically more likely to be struck by lightning, it said.

Could re-counts change the results?

The right to vote in the USA is determined individually by each state, so there are also different regulations for recounts. Usually, votes are re-counted when the result is extremely close or, for example, requested by a narrowly inferior candidate. Trump is likely to seek a recount in Wisconsin, Georgia and possibly Pennsylvania as well. In return, Biden’s lead should be a maximum of 0.5 percentage points.

In the past, the results of recounts in the states have changed only marginally. For example, four years ago in Wisconsin, at the request of a defeated candidate, all votes were counted anew: Trump increased his lead over Democrat Hillary Clinton by 131 votes.

Have courts ever determined the outcome of the US election?

In the controversial election in 2000, the judges of the Supreme Court played a decisive role: at the time, whether George W. Bush or Al Gore would become the next president only depended on the result in the populous state of Florida. The legal battle over the result and recounts dragged on for a month, before the Supreme Court. After that, Gore admitted defeat. Republican Bush won by 537 votes, secured the votes of Florida’s electorate and became US President.

When will there finally be clarity?

Troubled weeks are ahead of the USA, because the hanging game could drag on for another month: The states must certify their final results by December 8 and report them to Washington. This deadline, known as “safe harbor”, was one of the key factors in Gore’s decision to admit defeat in 2000.

What if the port is not safe?

If the dispute continues beyond the deadline, things could get complicated. In that case, the outcome from a state like Pennsylvania, where Republicans control parliament, could be decisive. Parliament could declare Trump the election winner when certifying the results under the pretext of electoral fraud, even if Biden had received the most votes. The democratic governor has yet to sign the result. He could then send another result to Washington – chaos would be programmed in such a situation.

A similarly controversial election could only be resolved in 1877 with political horse-trading. If the electoral college couldn’t elect a president in December, that role would fall to the House of Representatives. There everything would then be based on the delegations of the states – of which Trump’s Republicans have a majority. Such a scenario is not impossible, but unlikely: Republican MPs would have to stand against the will of the majority of voters in their state and against the majority of the votes cast for Biden in the United States.

When is everything dry?

The Americans should therefore not really breathe a sigh of relief until next year: The electorate will vote on December 14th, and the result will be read out in Congress on January 6th. Only then is it official who has won the election. The left US Senator Bernie Sanders told CNN that in the end it was “not important” whether Trump admits his defeat or not. “Joe Biden won the election and will be put into office.” This date is on January 20, when the next president will be sworn in in front of the Capitol in Washington. (sda / dpa)

Trump is fired! The funniest memes that sum up Trump’s election debacle

Note: The pictures or videos are not displayed? Click this link to see everything.

Donald Trump has been asking his supporters not to vote by letter for months. Therefore (during the corona pandemic) many more Democrats than Republicans voted by mail, which turned the result in Biden’s favor.

These were the details of the news Trump wants to challenge Biden’s election – these are his chances for this day. We hope that we have succeeded by giving you the full details and information. To follow all our news, you can subscribe to the alerts system or to one of our different systems to provide you with all that is new.