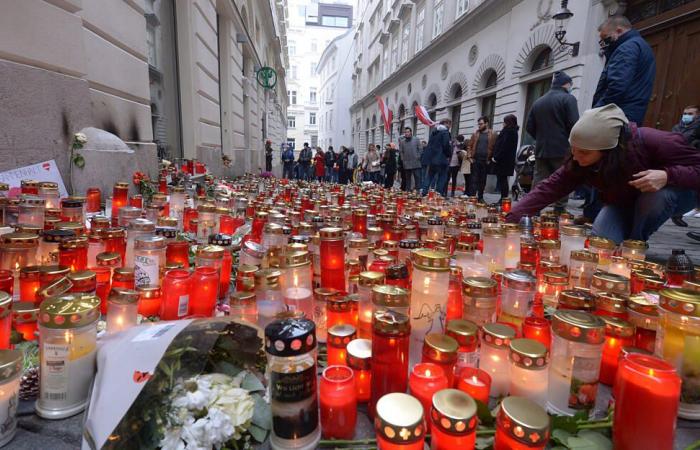 Shortly before the future Vienna terrorist traveled to Slovakia on July 21st to buy ammunition there.

According to Swiss media, the 18-year-old and the 24-year-old were in Vienna from July 16 to 20. Based on information from Germany, this meeting was under observation by the Federal Office for the Protection of the Constitution and Counter Terrorism, it said. The two Islamists from Zurich were arrested in Switzerland after the attack in Vienna. It cannot be ruled out that the later Vienna attacker was also in Switzerland, reported the federal media. In Germany, too, five house searches were carried out and two people were arrested. It was about the duo that had been guests in Vienna.

The Viennese police yesterday published extracts from the emergency call protocol of the night of terror on November 2nd. This shows how a number of erroneously false alarms from the population still triggered confusion and panic hours after the death of the assassin.

For example, the false alarm due to an alleged “hostage-taking” in a restaurant on Mariahilfer Strasse at exactly 9:30 p.m., which led to the 15th ongoing operation after the fatal shooting in Seitenstettengasse. At this point, the lone assassin had been dead for 81 minutes. Because although Kujtim F. had already been shot by WEGA officials at 8:09 p.m., a number of calls continued to be received from the population: among other things, about further exchanges of fire, about corpses in the city park, about alleged assassins who had been spotted in bars. The police had to investigate all of these leads. From 8 p.m. to 9 p.m. alone, there were 539 emergency calls, more than five times as many as the evening before. The control center took calls “every second”. “Of course we were all under extreme pressure”, quoted the ORF Vienna police officers.

This dynamic and “mobile” terror situation was the “worst case scenario”, it said.

One week after the Islamist terrorist attack in Vienna, the investigations are still in full swing. Who were the people who knew about and supported the 20-year-old IS sympathizer, who tried to travel with a companion from Vienna via Turkey to Syria in 2018 in order to take part in the fighting?

On Sunday, the Vienna Criminal Court imposed pre-trial detention on two other men: a 21-year-old and a 23-year-old, who are said to belong to the perpetrator’s environment. A total of ten people between the ages of 16 and 24 have already been arrested. It will be checked whether they were involved in preparatory acts or privy to it. The 22-year-old who accompanied the later assassin on his way to Syria is also in prison. In addition, an 18-year-old who is said to have encouraged Kujtim F. and his followers to join the IS is in custody.

The police released photos of the murder weapons used by the assassin: a machete, a handgun, lots of ammunition and a “Zastava M70” assault rifle, a model of Kalashnikov made in Serbia.

These were the details of the news Swiss Islamists also visited Vienna for this day. We hope that we have succeeded by giving you the full details and information. To follow all our news, you can subscribe to the alerts system or to one of our different systems to provide you with all that is new.