Kamala Harris, pioneer: “ I stand on the shoulders of all... 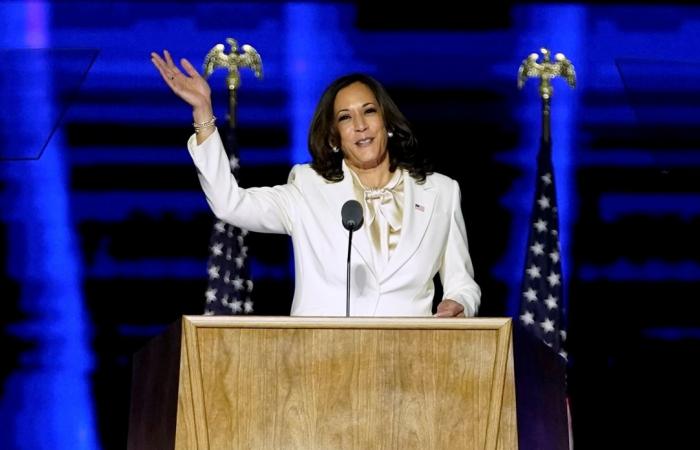 “To all the little girls sitting in front of the television now: dream with ambition, lead with conviction,” said new Vice President Kamala Harris during her speech at Joe Biden’s victory night.

Just before the new US president, Joe Biden, took the stage, Kamala Harris, the first female vice president and first vice president with black roots, focused on the fight for equality and reconciliation during her speech. ‘For four years you have taken to the streets for equality, democracy, tolerance, the climate, and so on. Also for generosity, for generosity, and also, yes, for the truth. You chose Joe Biden. He is a healer who will rule the nation with a steady hand. ‘

Joe Biden has cleared one of the greatest obstacles in American history: He chose a female vice president for the White House. But while I am the first, I certainly will not be the last. Because every little girl watching today sees what’s possible. ‘To all the little girls, to all the children who are now in front of the television: dream with ambition, lead with conviction. And see yourself as you are, believe in what you can do, even if people didn’t do that before. And know that we are there to cheer you every step of the way. ”

Harris also thanked her mother, cancer researcher Shyamala Gopalan, who died of colon cancer in 2009, with a hoarse voice and water in her eyes. “Right now, here, I want to thank my mother, who is always on my mind,” Harris said. When my mother came to the United States at the age of nineteen, she obviously didn’t know this was going to happen. But she believed moments like these were possible. She believed in women, all women. ‘

So now I’m thinking about the generations of women like her and me, black women, Indian women, Asian women, white women. Women who have given up so much and fought so hard for the right to vote, for equality. And then I specifically mention black women, who are often forgotten, but who form the backbone of our society. It is on their shoulders, of all those women, that I am standing here now. ‘

The way to union

Like Joe Biden, Harris underlined that she will defend and represent the interests of all Americans, not just those of the citizens who voted for Democrats. ‘American democracy is not guaranteed. It is only as strong as our will to fight for it. To guard them. We should never take them for granted. When the whole world has watched democracy at stake, you have shown that democracy can win. ‘

It doesn’t matter who you voted for: I will work for every citizen, just like Joe under President Barack Obama. I will think of every family, every family. Because only now does the real work begin. Restarting the climate agreement, the road to reconciliation for our nation, to unification. The path is long, but Joe is ready. ”

These were the details of the news Kamala Harris, pioneer: “ I stand on the shoulders of all... for this day. We hope that we have succeeded by giving you the full details and information. To follow all our news, you can subscribe to the alerts system or to one of our different systems to provide you with all that is new.