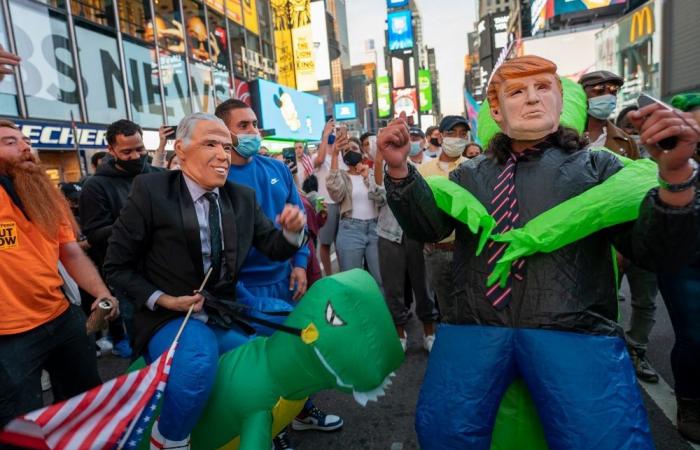 NEW YORK, Nov 8 — Joyous New Yorkers poured into the streets yesterday after Democrat Joe Biden defeated Donald Trump to win the White House, erupting in celebration as the business mogul and former star of The Apprentice was told: “You’re fired.”

Revellers cheered across a city that has sparred for years with the president who rose to prominence in the New York real estate world.

A reliable Democratic stronghold, the US financial capital’s disdain for the Republican’s conservative policies was no secret.

On an unseasonably balmy fall day Manhattan residents yelled and clapped, some waving flags and others banging pots from their balconies as car horns punctuated the applause.

Catherine Griffin cried tears of joy outside with one of her two kids, telling AFP: “I’m happy that Trump has gone from our lives, hopefully forever.”

“Having a little normalcy back in our lives, and my kids being able to see a decent human being in charge again — that just makes me happy for the day,” the 47-year-old said.

Hundreds of people gathered outside Trump Tower, while large crowds at Brooklyn’s Grand Army Plaza — in a nod to the outgoing president’s “You’re fired!” catchphrase from his days hosting The Apprentice reality show — chanted: “Trump got fired!”

Thousands more began amassing at Times Square and Columbus Circle, where a demonstration to protect the integrity of ballot tallying turned into a giant party.

“Biden has won finally,” said JD Beebe, a 35-year-old who works at an online company.

“I just feel like it’s a very American moment,” he said, adding: “I know the country is split almost 50/50, but I still think this is a very good day for democracy.

“I’m honestly looking forward to not every day having to be on a roller coaster about what ridiculous thing our leadership is going to say, or what they’re going to do to any oppressed portion of the community.”

The homepage of the Queens Daily Eagle, a local newspaper from the borough where Trump was raised, sent off the brash celebrity-turned-erratic president with a wry wisecrack: “Queens man evicted.”

“A 74-year-old Jamaica Estates developer has less than three months left at his current address after Americans overwhelmingly voted him out of the White House,” the paper wrote.

In another clip a United States Postal Worker paraded past a throng of exuberant New Yorkers, who applauded the national mail service much maligned by Trump, who has made baseless claims that many mail-in ballots were fraudulent.

“I’ve never seen so much joy in the city, it’s super beautiful,” said Hiram Gonzalez, 23, standing in front of Trump Tower, the skyscraper where the one-term president lived in his lavish penthouse prior to moving to Washington.

“Trump’s a fascist, a racist, homophobic, he’s Islamophobic — everything he represented is against myself and my values and how I was brought up,” said the son of an immigrant from Mexico.

As he imbibed in yesterday’s festive atmosphere, Gonzalez said he is “very optimistic and inspired,” but said there’s “a lot more work to do” to uplift a nation divided.

“I am ready for the future,” he said. “We have to keep moving forward as a nation.” — AFP

These were the details of the news New York says good riddance to native son Donald Trump for this day. We hope that we have succeeded by giving you the full details and information. To follow all our news, you can subscribe to the alerts system or to one of our different systems to provide you with all that is new.

PREV NATO forces will leave together from Afghanistan, Blinken says
NEXT Youth join mainstream as India unveils development initiatives in Jammu and Kashmir