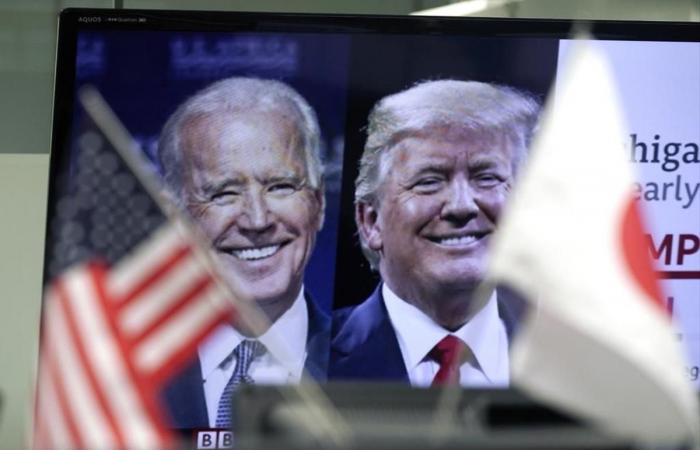 Referring to “fraud”, Donald Trump intends to challenge the victory of his Democratic opponent in American courts next week.

Donald Trump spoke of “fraud” and promised to challenge his defeat to Joe Biden in court. But so far, he has not presented any evidence and his appeals do not seem able to influence the outcome of the poll.

A few minutes after the announcement by the American media of the victory of Democrat Joe Biden, the Republican president considered that the election was not “over” and gave an appointment Monday in court to his opponents.

In tweets, pinned as “misleading” by the social network, he referred to “tens of thousands of illegally arrived bulletins” and a “gross” lack of transparency on the count.

Democrats “behaved in a way that suggests fraud,” added his lawyer Rudy Giuliani, just as imprecisely, at a press conference in Philadelphia, speaking of bulletins on behalf of the deceased, and of “manipulation “.

Elsewhere, his allies have referred to “signs obstructing the view” of count observers, post-dated ballots or the vote of voters not residing in their constituency, without providing evidence to substantiate their accusations.

“Trump’s legal strategy is not going anywhere,” says law professor Rick Hasen. “It won’t make any difference to the outcome of the election,” he wrote on his benchmark blog, Election Law.

The “exception” of Pennsylvania

“I am not aware of a single recourse having a legal basis, with one small exception in Pennsylvania”, also judges Steven Huefner, professor of law at the University of Ohio.

The file concerns the postal ballots of this key state, which fell narrowly into the hands of Joe Biden.

Noting the dysfunctions of the postal services and the increased recourse to voting by mail because of the pandemic, the democratic officials of the state had authorized the inclusion of ballots mailed until Tuesday, but arrived within three days.

Even before the poll, the Republicans in Pennsylvania had taken legal action to prevent them from being counted. Seized urgently, the Supreme Court had refused to intervene, while leaving the door open to a substantive examination after the vote.

The Pennsylvania authorities then ordered that these ballots be counted separately, in case they were later invalidated.

But the Republicans assured that some polling stations did not follow these instructions and returned to the Supreme Court. One of its judges, the very conservative Samuel Alito, gave them cause for satisfaction Friday night by ordering all offices in Pennsylvania to comply.

Even if they did manage to get those votes invalidated, it is unlikely that this would prevent Joe Biden from winning, as the number of ballots involved appears to be well short of Joe Biden’s lead in that state (37,000 votes). ).

Even if Donald Trump succeeded in his bet in Pennsylvania, it would probably not be enough to stay in the White House, since Joe Biden is given the winner in a series of other key states. It would therefore have to succeed in invalidating thousands of votes elsewhere.

For this purpose, it provides for complaints in a dozen states according to Rudy Giuliani.

“I think they will be very quickly rejected by the judges,” said Steven Huefner, however, recalling that “vague assertions of fraud” are not sufficient to convince a judge. “We must present the facts,” he told AFP.

Beyond his legal actions, Donald Trump wants to demand a recount in Wisconsin, where he is only 0.6 points behind by the Democrat. The authorities in Georgia, where the difference is counted in the thousands of votes, also intend to recount the votes.

These operations could delay the announcement of official results. “But in modern history, they have never made it possible to recover more than a few hundred votes,” recalls Mr. Huefner, for whom the dice are definitely cast.

These were the details of the news United States – Trump initiates legal battle against Biden on Monday for this day. We hope that we have succeeded by giving you the full details and information. To follow all our news, you can subscribe to the alerts system or to one of our different systems to provide you with all that is new.