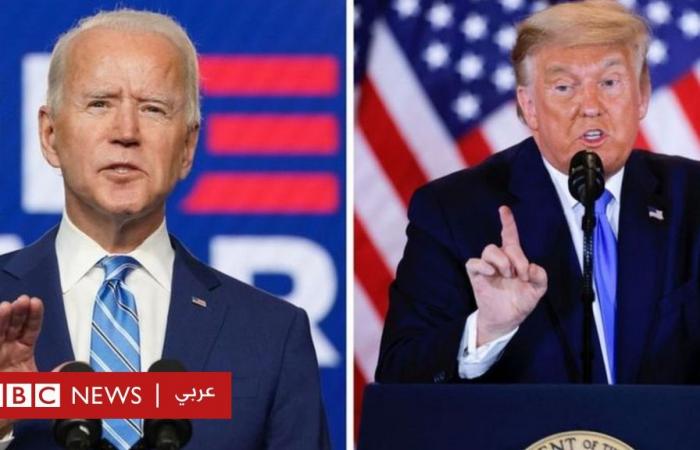 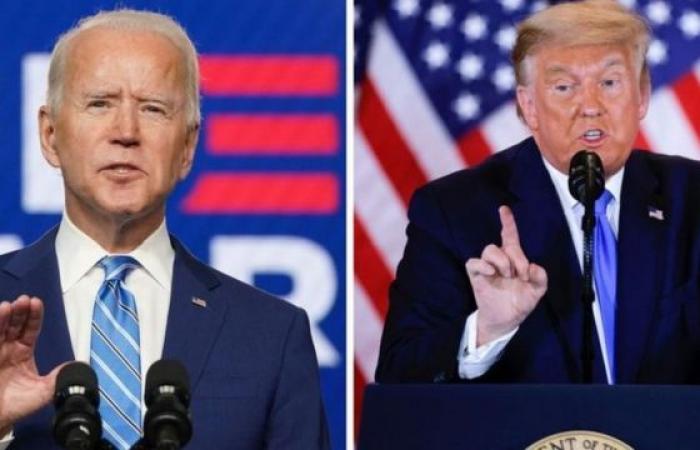 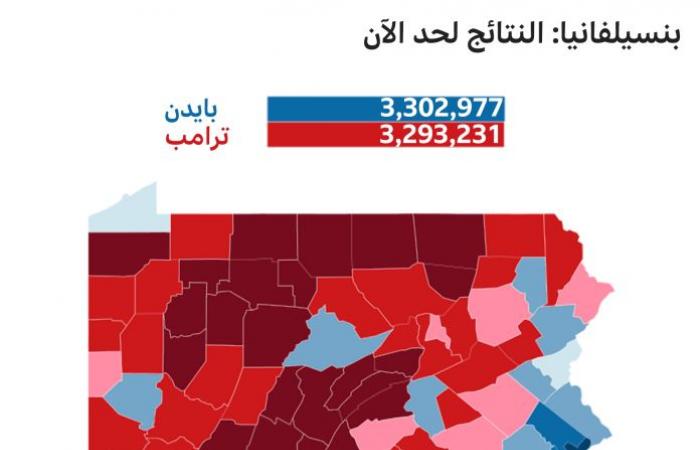 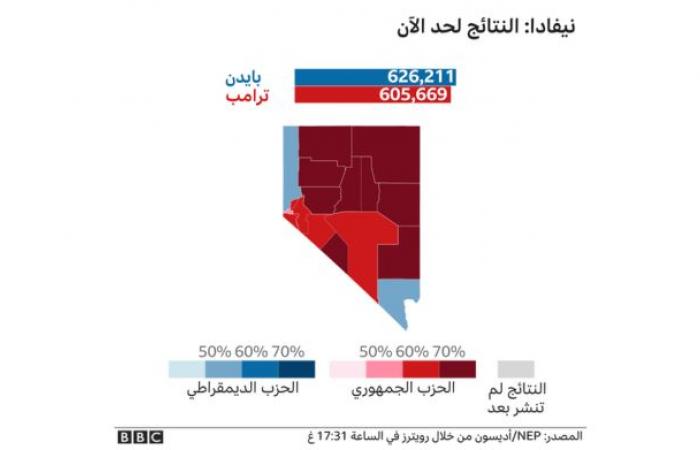 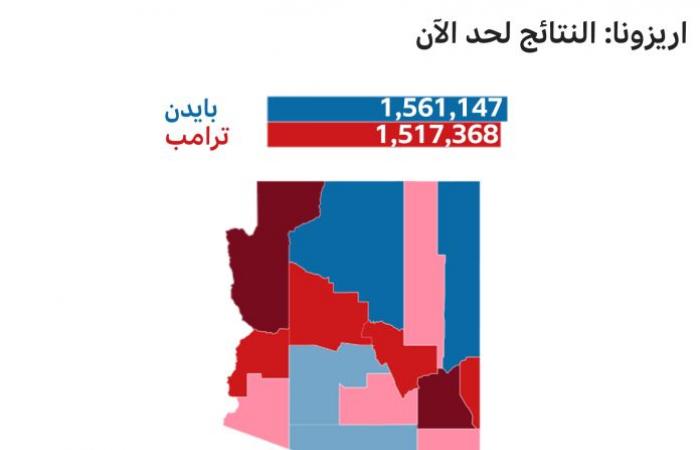 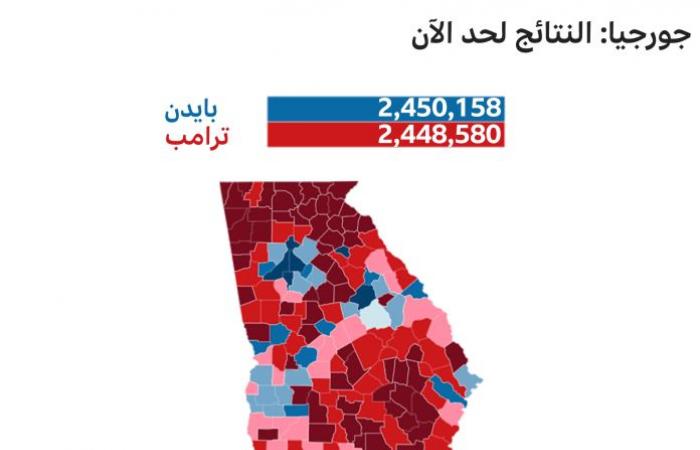 Democratic candidate Joe Biden is ahead of his Republican rival, incumbent President Donald Trump, in Pennsylvania, one of the crucial states in the US presidential election, according to the latest results.

Biden received more than 14,000 votes, after counting 98 percent of the vote, and if he got the state’s votes, he would win the presidency.

Prior to that, Biden had advanced over his rival Trump in Georgia, another key state, but a recount was decided in the state.

The Trump campaign said, “These elections are not yet decided.”

Matthew Morgan, a Trump campaign attorney, said that ballot box fraud had occurred in Georgia, without providing evidence of his claim, and that observers in Pennsylvania had not had a “full opportunity” to monitor the counting process.

“We have said from the beginning that all legal votes must be counted, and that all illegal votes should not be counted,” a statement later issued by Trump said, “Yet every time we have faced opposition from Democrats to this basic principle.”

“We will go on this path in all its legal aspects in order to ensure the confidence of Americans in our government. I will not stop fighting for you and our nation,” he said.

CBS News quoted a senior Trump administration official as saying that Trump does not intend to admit defeat if Biden declares victory.

Reports from Biden’s campaign in Delaware said he would deliver a speech to the nation Friday night if the presidential race was announced.

What he is Currently setting elections?

Some of the media gave Biden a greater number of votes as they expected him to win in Arizona, but the BBC believes that resolving the Arizona matter is premature.

And Pennsylvania, where Biden was born, has 20 electoral votes if the Democrats get it, they are guaranteed 273 votes. Election supervisors there said the count would take days.

Pennsylvania has always been a major political battleground. The state used to vote the Democrats in six successive races before switching allegiance to Trump in 2016.

Biden currently leads Georgia with more than 1,500 votes, with 99 percent of the votes counted. Election supervisors said the state decided to recount the votes because the difference between the contestants was so small.

Georgia is a stronghold of the Republicans, and it has not voted for a Democratic candidate in the presidential election since 1992.

The Trump team believes that judicial objections and a recount will favor the Republican candidate.

Biden would suffice to win in Pennsylvania or in two of the remaining states to secure the presidency.

As for Trump, he must win in Pennsylvania and three of the remaining states to ensure he remains in the White House.

This is the latest news on the remaining key states:

Trump reduced the difference between himself and Biden in Arizona (11 votes in the electoral college) to 40,000 votes, after 93 percent of the votes were counted. The BBC’s US partner CBS classified the state as “closer” to Biden.

Trump was leading by more than 76,000 votes in North Carolina (15 electoral college votes), with 96 percent of the vote counted.

And in Nevada (6 electoral college votes), Biden leads more than 20,000 votes with 90 percent of the vote counted.

Biden is ahead of Trump in Georgia, and also in Pennsylvania.

And the state of Georgia (16 votes in the electoral college) is sufficient for him to ensure a tie in the number of caucuses, at least, while waiting for the remaining states. Pennsylvania is expected to hand over the White House keys to the Democratic candidate if he wins.

Trends in both states indicate Biden’s lead over Trump, and that progress will continue. The recount has been announced in Georgia.

Biden is expected to win more votes in Pennsylvania than Trump did in 2016.

The final days in the state were exciting because of the counting process that began with the vote of the electorate in attendance that tilted to Trump, followed by the mail votes that tipped Biden’s favor.

What did the two candidates say?

But the Trump campaign did not present any evidence of violations of the law or electoral fraud.

The president added, “We were far ahead in all major states, and then our numbers began to diminish in secrecy … There have been many violations and we will not accept that in our country.”

Trump had alienated his supporters from voting by mail, and Biden urged voters to cast their ballots by mail, which are the votes that are counted in major states.

Analysts are playing down Trump’s claims that the Democrats are rigging the election because the Republicans fared better than expected in the congressional elections.

On Friday, Senator Mitt Romney joined a number of Republicans who had criticized Trump’s statements, writing on Twitter: “He was wrong in saying that the elections were rigged.”

As for Biden, he called for calm, and once again expressed his confidence that he would be the winner.

He said in a televised statement: “Democracy can be chaotic sometimes, and it requires a little patience at other times.”

“The system is working, the screening process is underway, and we will know the results soon,” he added.

With the exit of the initial results, protests came out from both sides against the screening process.

What are the lawsuits filed by the president?

Trump has filed a slew of lawsuits complaining about wrongdoing and a lack of transparency.

The president requested a recount in Wisconsin, which is the right of every candidate behind their opponent by 1 percent of the vote.

But Biden was ahead of nearly 20,000 votes in the state. Analysts said the recount of votes on previous occasions did not change the result by more than hundreds of votes.

Courts in Michigan and Georgia rejected the calls from Trump’s team.

But the Trump campaign won a court battle in Pennsylvania when an appeals court judge said Republicans had a right to get a closer look at the voting process.

The Nevada Republican Party said it had sent a report to the Department of Justice of “at least 3,062 cases of fraud.” He added that thousands of people were caught violating the law by voting after they left the state.

These were the details of the news US Election 2020: Biden leads Trump in Pennsylvania and decides to... for this day. We hope that we have succeeded by giving you the full details and information. To follow all our news, you can subscribe to the alerts system or to one of our different systems to provide you with all that is new.

NEXT Stand with Myanmar people and protect them, urges UN rights expert