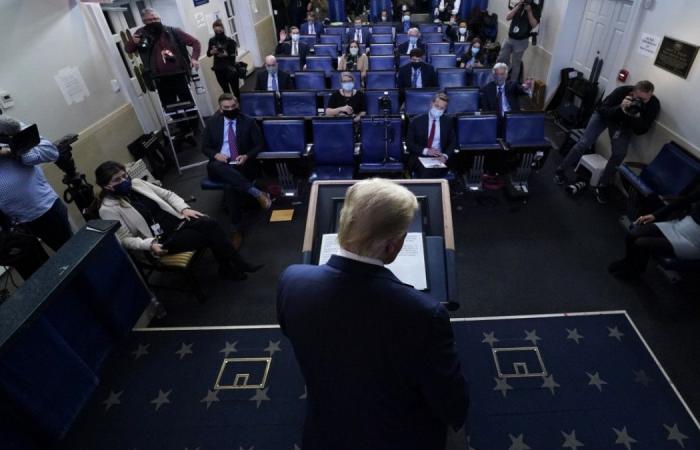 The press conference ended after 35 seconds. Brian Williams, news presenter at MSNBC, had the president turn off the sound, he could only be heard softly in the background, nothing to be understood. “We find ourselves in a situation where we have to interrupt the President of the United States,” said Williams. And he also has to correct it.

Almost all of the major broadcasters made the same, extremely unusual decision on Thursday evening. Not only the left-wing MSNBC, but also ABC, NBC, CBS and the radio network NPR spontaneously cut away from Trump’s speech in which he said one falsehood after the other: If you counted the “legal votes”, according to Trump, he would have been relaxed won. But if you count the “illegal votes”, “then they can try to steal our victory”. He wasn’t much more precise, he was concerned with the late votes, there were a lot of them, you had to look at them very carefully.

Brian Williams, the MSNBC man with the carved, classic “News Anchor” face, switched on the legal expert of his station and let him confirm that nothing was known about illegally cast votes and that Trump, at least for the moment, did not win have.

Since the beginning of his presidency, Donald Trump has been subjected to daily fact checks in the media, and almost every day journalists found lies, inaccuracies and distortions of the facts in his statements. But he was allowed to speak, broadcast his speeches, quoted him. He’s the president, after all. It has been different since Thursday. Most of the broadcasters do not even give him the opportunity to speak live of an election fraud for which no one has presented evidence, not even the Trump camp. Or a victory that has not yet existed.

Shepard Smith was live on CNBC news channel when Trump spoke. Smith worked on Trump’s favorite channel Fox News until last October, but quit because of dissatisfaction with the channel’s lack of neutrality. He, too, interrupted the President. He said, “There’s not a trace of truth in anything he said.”

Over at Fox, like on CNN, Trump was allowed to be pronounced. But his speech did not go unchallenged there either. Fox News presenter Martha MacCallum, who also led through election night, said evidence of the election fraud mentioned by Trump “has yet to be presented, if it actually exists.”

Jake Tapper from the left-wing liberal CNN was less reluctant. “What a sad evening for the US,” he said in light of the president’s words. Trump tries to attack “democracy with a bunch of untruths”. He tarnished the credibility of the vote count, it was “poor”. On CNN even the former Republican Senate MP Rick Santorum, who otherwise often defends Trump, contradicted: what the president said was “dangerous” and “shocking” https: // news. google.com/__i/rss/rd/articles/. “Counting letter votes is not a scam.”

Television has repeatedly shown itself helpless in the face of Trump’s careless handling of the truth. It depends on pictures, official statements by the President are traditionally broadcast live. With that they are in the world, no matter how often the moderators contradict them afterwards. It was very rare for a Trump press conference to be interrupted by editing. The broadcasters seem to have prepared themselves for this scenario. Before the election, there had been repeated speculation about how Trump would react to a tight or a long uncertain election result. This is exactly what happens now. And television curbs – strictly with Trump, but also with itself – its transmission reflex.

The operators have known the problem for a long time on social media platforms, especially on Twitter, Facebook and Youtube. The 2016 election year casts a huge shadow over its self-portrayal as an industry that wants to make the world a better place. Lies and trolls had manipulated the outcome. For a long time they had hesitated to intervene. The ideal of the Internet was after all a marketplace of ideas, open to everyone, a digital ultra-democracy. Who could have guessed that Russians, peddlers and the megalomaniacal building contractor from New York would make the best use of the big hype.

Of all things, Twitter founder and boss Jack Dorsey made the impression in 2019 that he didn’t care about the role of his platform in politics: Even though Donald Trump uses the short message service as the most important tool of his communication, they seem to be more important to him as his changing media officer, as television, radio and newspapers. In the spring of last year, Dorsey was still sitting on the stage of a digital conference in Canada, a little calm, fending off questions from a journalist who wanted to know how much responsibility his company had for the erosion of public debate. Somewhat vaguely he described his plans to do something about it. When he announced in the fall that he would be spending a good part of the election year on a sabbatical in Africa, many doubted his sanity.

Facebook founder Mark Zuckerberg and the founders of the Google empire Larry Page and Sergey Brin, to which YouTube belongs, were similarly stubborn – even before committees of the American Congress. Too much was at stake for them: not just the ideal of openness, but above all their business model.

And yet the platforms have changed fundamentally in 2020. The world became more aware of this on election night than ever. Both Twitter and Facebook hid a post from the president claiming he was in the lead and that the Democrats were trying to steal the election. “Some or all of the content shared in this tweet is controversial and could be misleading about an election or other democratic process,” it read before the President’s words could be read. A polite way of describing the label “lie”.

Eleven tweets from the president have been hidden behind such a warning since election night. This also includes the video from which the television and radio stations unlinked on Thursday. Facebook acted similarly when a group called “Stop the Steal” formed there the day after election night, claiming that it was fighting for democracy because “Biden stole the election”. It is a group that grew to over 300,000 members in less than a day. Then Facebook stepped in.

Twitter and Facebook make such decisions against their own interests. The aim of every digital application is a function that is as smooth as possible. If Twitter and Facebook put in brakes, if they hide or even delete posts behind warnings, if they subject political advertising to review processes and if the radicals among their users are blocked, it costs them reach, speed and money.

You don’t have to do that. There is still section 230 of the Media Act 1996 which protects them from third party actions on their systems. But they don’t do it voluntarily. Because nothing costs a company as many customers as a defective product. Social media that corrode, fuel and poison public discourse only earn a lot of money in the short term. In the long run, they lose trust, their greatest asset.

But this is how digital media will take on a new pioneering role. In the election year 2016, an abyss opened up in digital space. They closed it again in the 2020 election year and established themselves and their traditional forerunners as a true “fourth power in the state”. For the first time in history, it was not those in power who thwarted the media, but rather the media who labeled the words of those in power with a very official label of lies.

*The article has been translated based on the content of Source link by https://www.sueddeutsche.de/politik/trump-wahlbetrug-wahl-1.5107494
. If there is any problem regarding the content, copyright, please leave a report below the article. We will try to process as quickly as possible to protect the rights of the author. Thank you very much!

These were the details of the news US election: TV channels turn off Trump – politics for this day. We hope that we have succeeded by giving you the full details and information. To follow all our news, you can subscribe to the alerts system or to one of our different systems to provide you with all that is new.