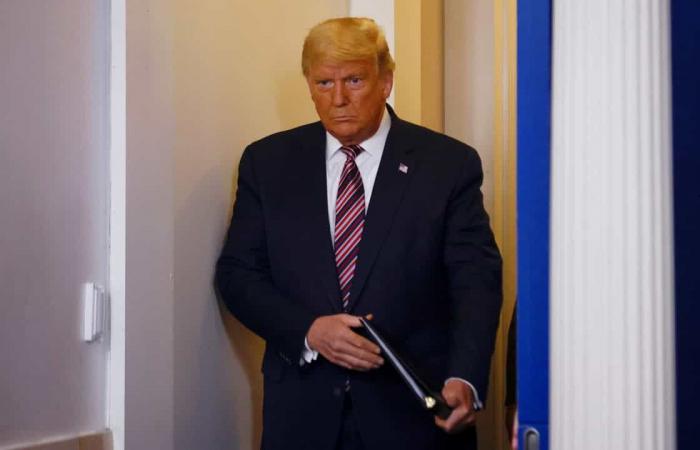 A vote counting in the states of Georgia and Pensilvânia continues to progress and the results in those two states could give Joe the presidency this Friday Biden. The Democratic candidate overtook Donald Trump in projections these two states. The margins are small, but the trend in postal votes in Georgia and Pensilvânia has been favorable to Biden, in certain counties in an overwhelming way.

At this point, Joe Biden has 253 electoral college votes against Donald Trump’s 214. 270 is the magic number to determine who will occupy the White House in the next four years.

Follow the MINUTES here the latest developments on the elections in the United States.

“We need to find out about these irregularities and we need people to be patient and give us time to investigate,” said the head of the Republican National Committee.

Biden won in Detroit with 94% of the vote.

20h48 – The President of the United States and Republican candidate Donald Trump said today that he will resort to legal means to obtain re-election, when his electoral chances are reduced.

“We will continue this process through all aspects of the law, to ensure that the American people have confidence in the government. I will never stop fighting for you and for our country “, said Trump, in a statement distributed by his campaign.

20h41 – Joe Biden is spending the day with his family at his home in Wilmington. THE CNN advances that the Democratic candidate is following the results that are being announced on television and is getting updates of your campaign.

20h39 – Trump continues to shorten the margin for Biden in Arizona – is less than 40,000 votes at this point. However, it may not be enough to win the vote in this state.

20h31 – Lawyers for the Republican Party of Pensilvânia they are asking the Supreme Court to prevent electoral officials in this state from counting the postal votes that arrived after election day, last Tuesday.

The Secretary of State for Pensilvânia, Kathy Boockvar, has already given orders for the votes that arrived between Wednesday and today to be segregated. This means that these votes are processed, counted separately and, for now, they are not added to the total counted votes.

20h25 – Republican leaders are pressuring Trump to publicly present evidence to support his accusations of widespread fraud in voting in decisive states, CNN.

“I think the president should delegate this discussion to his lawyers. And if they have a case to file, there is a process for doit, “found Roy Blunt, Republican senator from Missouri and chairman of the US Senate Rules and Administration Committee.

20h05 – Although his chances of reelection are dwindling, nearly 70 million Americans voted for Donald Trump – eight million more than in the 2016 elections.

19h59 – Prime Minister britactor, Boris Johnson, declined to comment on the impact that Joe’s possible victory Biden may have for the government it leads, according to Sky News. “I think that while the votes are being counted, we should wait,” he noted.

However, he clarified that the “Prime Minister of the United Kingdom will always work very closely with whoever the President of the United States” is.

19h48 – In the state of Nevada, 63,000 votes were still to be counted in Clark County, the most populous in the United States, and counting could continue until Sunday, announced today Joe Gloria, responsible for the ballot in this constituency.

This western state, which elects six representatives to the electoral college, could be decisive in meeting the country’s next president, and for the moment the results favor Democrat Joe Biden.

19h45 – Senior members of the White House and the Trump campaign are distancing themselves from the president and his statements, according to sources cited by CNN. This at a time when updates of the vote counts of the Pensilvânia and Georgia make Trump’s reelection increasingly unlikely.

“It’s over,” said one of the advisers to the Trump administration, who said he did not know what the president could do next, and did not concede defeat. This adviser also stressed that many members of the White House disagreed with Trump’s statements this Thursday, who again made accusations of fraud in the electoral process.

19h30 – A crowd is already forming near the place where Joe Biden will speak tonight.

19h23 – The small margin that Biden has regarding Trump in the Pensilvânia and the number of votes that are pending are two reasons why it is still too early to declare a winner in the state, according to the Associated Press. The law of Pensilvânia dictates that there should be a recount of votes if the margin is less than 0.5 points – at this point it is 0.2 points.

19h01 – The extent of protest by supporters Trump outside the Detroit Convention Center, where postal votes were counted, has grown, reports The New York Times. About 200 people are shouting ‘Stop the theft!’ and to repeat the unfounded accusations of fraud by the president.

18h16 – Philadelphia ‘mayor’ Jim Kenney, stressed that the Trump campaign’s fraud allegations are “unfounded” and stressed that the president’s team “did not even present a small piece of evidence” of fraud in the city’s vote.

18h07 – Philadelphia city commissioners said at a press conference this Friday that about 40,000 votes remain, something that could take several days to complete.

18h04 – A senator Kamala Harris is also going to speak tonight. Go do-lo before Joe Bidenreveals the CNN. This will be the first time Harris has spoken since election day.

17h58 – Republican Senator Mitt Romney went further than the rest of the party in criticizing President Donald Trump. In a statement posted on Twitter, Romney started by saying that Trump has the “right to ask recounts, request an investigation into alleged voting irregularities if there is evidence “.

“He is wrong to say that the election was flawed, corrupt or theft. Do itit damages the cause of freedom here and in the rest of the world, weakens institutions that are based on the foundation of our Republic and irresponsibly ignites destructive and dangerous passions, “he added.

17h39 – Biden won more votes than Trump in the last update counting in Bucks County, Pensilvânia, refers to CNN. Biden approaches a 10,000 vote margin on Trump in this key state.

17h28 – Joe Biden will make a statement Friday evening in Wilmington, Delaware. The Democrat is very close to securing the presidency of the United States. Your campaign team believes that this will be a victory speech, but it will depend on the update counting of votes, especially in the states of Pensilvânia and Georgia.

17h02 – The victory of Biden in the state of Nevada it can be practically assured. The New York Times says the vast majority of the votes that remain to be counted are from Clark County, a county that is predominantly Democratic. Six votes from the electoral college are at stake.

16h59 – With the counting of votes in the six states remaining to be determined to continue to be favorable to Joe Biden, US President Donald Trump made a new post on Twitter. This time to address the race to the Senate.

“With the Radical Left Democrats attacking the Republican Senate, the Presidency becomes even more important!” Wrote Trump. This publication comes after the CNN Tue designed that Democrat Mark Kelly won the Arizona Senate seat, which was from Republican Martha McSally.

16h39 – Former astronaut Mark Kelly, a Democrat, won the senator Republican Martha McSally in the Arizona Senate race, advances to CNN. This place belonged for many years to John McCain.

16h37 – The scenario is quite favorable for Joe Biden at this point. Were updated Nevada’s vote count data and the leadership of Biden grown up. It has a margin of about 22,000 votes for Trump – 1.8 points.

16h28 – Joe’s margin Biden continues to increase in Pensilvânia, according to the CNN. The Democrat now has an advantage of more than nine thousand votes for Donald Trump – 0.1 points.

16h23 – With Joe Biden on the verge of victory in the elections, Nancy Pelosi, as president from Câtimes of Representatives, called him “president-elect” during a press conference, according to Sky News.

“Of course, the ticket Biden-Harris will win the White House “, he stressed Pelosi, adding that the outcome of the elections is “imminent”.

15h56 – In front of tiny margin between Biden and Trump in the Georgia vote, “there is going to be a recount“, assured the main electoral officer in the state of Georgia, Gabriel Sterling. currently, Biden has an advantage of around 1,500 votes.

Sterling said the authorities found no evidence of “widespread irregularities” in the vote counting process. But recount it is necessary because they are “literally looking at a margin that is less than a large school”.

15h45 – At 12 pm local time (4 pm in mainland Portugal), the state of Arizona will update the vote count of Maricopa County, the county with the most inhabitants of Arizona. In Georgia, just over 4,000 votes remain to be counted.

15h27 – Joe’s campaign team Biden issued a statement responding to reports that Donald Trump does not intend to concede defeat in the elections.

“As we said on the 19th of July, the American people will decide these elections. And the United States government is perfectly capable of escorting transgressors out of the White House“said campaign spokesman Andrew Bates.

These were the details of the news Republicans pressure Trump to present fraud case for this day. We hope that we have succeeded by giving you the full details and information. To follow all our news, you can subscribe to the alerts system or to one of our different systems to provide you with all that is new.