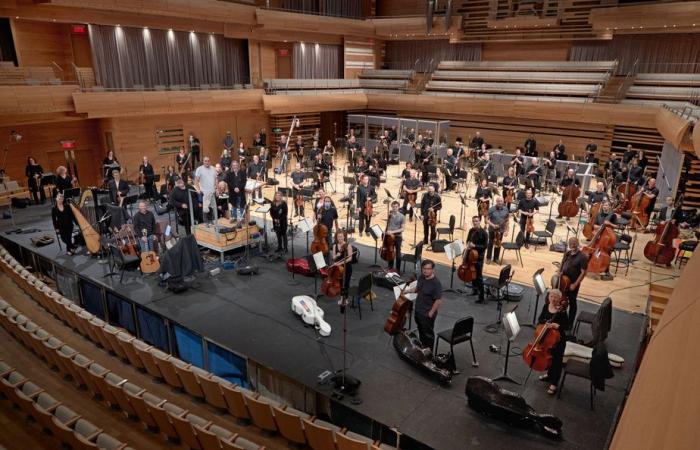 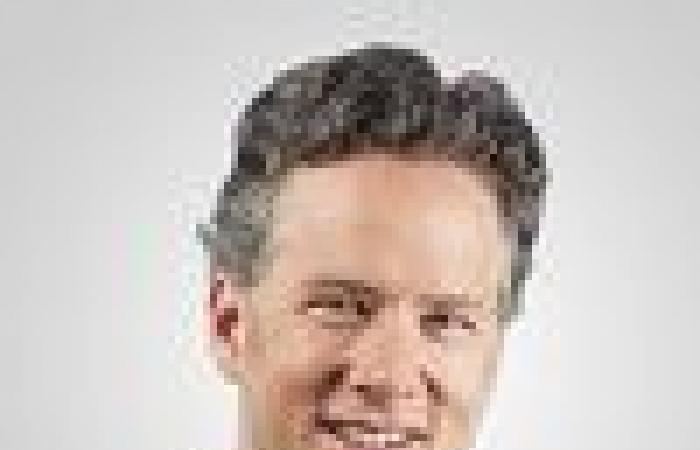 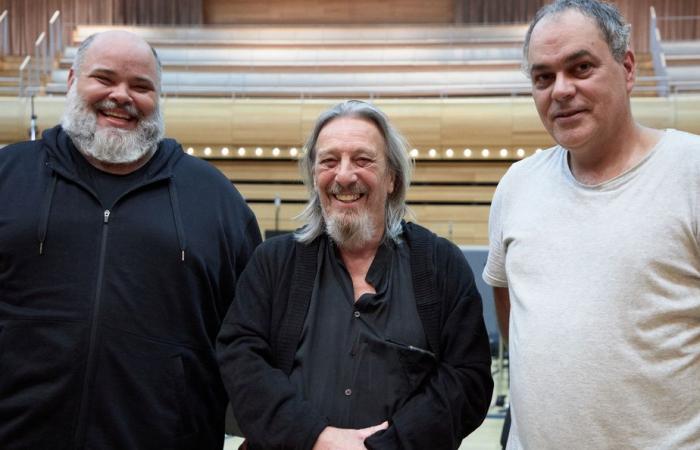 The entire repertoire of the legendary group Harmonium has been revisited and orchestrated by Simon Leclerc in a unique work, Stories without words, double album co-produced by Serge Fiori, which will be on sale on December 3. Nearly 70 musicians from the Orchester symphonique de Montréal, under the direction of maestro Leclerc, performed this luminous soundtrack in May, at the Maison symphonique, despite the pandemic. A crazy idea from the producer Nicolas Lemieux, who spoke to our columnist.

It was almost midnight on August 19, 2017. Nicolas Lemieux had just realized his somewhat crazy dream of bringing together three orchestras at the foot of Mount Royal, as part of the 375 celebrations.e Montreal anniversary.

Lemieux, producer and president of Montreal label GSI Musique, was alone at the bar with Simon Leclerc, conductor, composer, orchestrator and associate conductor of the OSM POP series. Maestro Leclerc had just conducted some 400 musicians of the Orchester symphonique de Montréal, the Orchester Métropolitain and the McGill Symphony Orchestra, as well as artists such as Rufus Wainwright, Wyclef Jean, Marie-Nicole Lemieux, Patrick Watson , Elisapie and Cœur de pirate.

A concert on the scale of this Symphonic Montreal had not been organized in the “mountain” since Midsummer’s Day in 1976. At the time, the show OK here we go had concluded three days of festivities in the rain, by bringing together on stage the cream of the young musicians of the moment: Richard Séguin, October, Contraction, Beau Dommage and Harmonium.

“I was on the cloud of this great magical evening and I told Simon it would be difficult to do better. He replied: you will have to find it! », Says Nicolas Lemieux, laughing.

This is the kind of challenge that we do not throw lightly to Nicolas Lemieux. Ideas of grandeur are for him the most stimulating ideas. “All or nothing” seems to be one of his personality traits. Also, it didn’t take long to find.

The most ambitious and jaw-dropping project of his 25-year career, he says: to record, in a symphonic version, all of the music of the legendary group Harmonium. From the first homonymous album to L’heptade, Passing by What if we needed a fifth season.

You first had to convince Serge Fiori of the appropriateness of revisiting his early works, created when he was between 22 and 25 years old. Nicolas Lemieux suspected that this would not be an easy task. He had the advantage of having produced Serge Fiori’s most recent album, in 2014. But he wanted to convince Fiori that the project would take place… without his voice.

I didn’t want it to be a cut and paste of the Harmonium albums with more orchestrations, he says. I was wondering how to create a great musical poem, by rebranding the integral in full. I didn’t mean to cheat.

“I didn’t want to use old tracks. I wanted it to be 100% pure, he adds. So my intuition was that Serge’s voice, which is an instrument in itself, shouldn’t be there. ”

In the summer of 2018, Lemieux took his courage in both hands and he dared to propose his idea to the leader of Harmonium. “I was afraid of being hit with 2x4s! Fiori said to me: are you sure? Are you serious ? », He recalls. Yes, they were serious.

Simon Leclerc – thrilled by this crazy new Lemieux project – had in mind a “cinematographic approach” to the work of Harmonium. The soundtrack of a dive into the group’s universe. After five months of work, Leclerc offered embryonic models with ideas for orchestrations to Lemieux, who was blown away by what he heard.

“I knew I wouldn’t have two chances with Fiori if he wasn’t convinced on the first listen,” says the producer. He is a very authentic person, who does not hesitate to say what does not suit him. I knew he wouldn’t let me do anything with his life’s work! ”

Serge Fiori was in turn seduced and gave the green light, with hardly any minor indications. Convincing Fiori had been a challenge. It wouldn’t be the last. At the start of 2020, as Nicolas Lemieux was considering what type of recording would be ideal for the sound signature he wanted to give the album, a glitch happened. That is to say that a global pandemic has brought everything to a halt …

As an creator and artistic director, but also a producer with a high stake, Lemieux decided against all odds to go ahead with his project. He decided that the recording would take place at the Maison symphonique de Montréal, even though Madeleine Careau, the OSM’s CEO, gave him to understand that it was madness. “She told me the same for Symphonic Montreal ! »

Lemieux called on some of the best sound engineers in Quebec and the United States, as well as specialists in orchestral recordings, to transform the Maison symphonique into a gigantic recording studio. “We wanted to record like in Abbey Road [le studio mythique des Beatles], with the texture of the time and the quality of today. It had to be exceptional! ”

It was also necessary to respect the rules of physical distancing, even if the project had received the approval of Public Health. Also, the stage of the Maison symphonique had to be lengthened, he said, “up to row G”…

For 21 days, last May, an impressive technical team got down to the task of this extraordinary recording. Choristers, soloists and 68 musicians, under the direction of Maestro Leclerc, met on stage for the first time since the start of the pandemic. Serge Fiori attended all the recordings in addition to co-producing the album with Simon Leclerc.

“I knew that tackling this was huge,” says Lemieux, who dares not say how much the production cost. [quelques centaines de milliers de dollars]. I was touching on something sacred, on Quebec pride. It would be catastrophic or formidable! I could have hit a wall! ”

In my opinion, he rather hit a home run. More than 140 minutes of evocative music, whose melodies and recurring themes – the pieces vary between 2 and 15 minutes – are absorbed like both powerful and comforting doses of nostalgic dopamine.

If there is a repertoire of popular Quebec music that was worth revisiting in a symphonic version, it is that of Harmonium. The rich orchestrations of Simon Leclerc, while remaining faithful to the original songs, accentuate all the subtleties. The whirlwind of strings The call / The first sky / On a tightrope, the bewitching winds of Vert, the triumphant brass ofA musician among many others, the irresistible crescendo of Since the fall. The music of a film that we know by heart, but that we discover from a new angle.

I was seized with a sudden and lively emotion as I rediscovered, thus arranged, the soundtrack of my childhood. My father’s favorite Harmonium albums played on repeat at home. “Every time I listen to it, I am overwhelmed. If my dad was still alive, I would love to listen to him with him, ”Nicolas Lemieux told me, visibly moved.

This music that transcends generations, he rightly emphasizes, is linked to the history, both intimate and collective, of Quebec. His symphonic rereading was recorded at a very special time. The feverishness of the OSM musicians, their desire to do justice to this great popular music, is felt in the recording. I cannot say precisely how, but I am convinced of it.

Three years after its ideation, the crazy project of Harmonium symphonique will see the light of day. The double album Stories without words will be offered on December 3, exclusively on the site www.harmoniumsymphonique.com, in digital version, in boxes of two CDs or four vinyl records, accompanied by a booklet.

It is now possible to listen to a first sample (Harmonium) and pre-order the album on the site. Other excerpts will be presented throughout Paul Arcand’s show, Since we have to get up, this Friday morning.

However, it will not be possible to buy Stories without words in store, nor to listen to it in pieces on a continuous platform. It would not be respectful of the work, believes Nicolas Lemieux. “The times consume quickly and throw away quickly. This project is quite the opposite, ”believes the producer, who furthermore finds that it would be irresponsible to cause a rush in record stores at this time.

We can feel him sincere when he says he is privileged to have been able to complete this “grandiose” project (a word he will often repeat in interviews). “I could have waited a year to release it,” he says. But I thought it was important that it be done now, in the context of the pandemic. I wish it would do people good. It is an album that inspires serenity, communion, peace. »Words that are not too trendy. And who do good.

These were the details of the news The complete Harmonium in symphonic version for this day. We hope that we have succeeded by giving you the full details and information. To follow all our news, you can subscribe to the alerts system or to one of our different systems to provide you with all that is new.