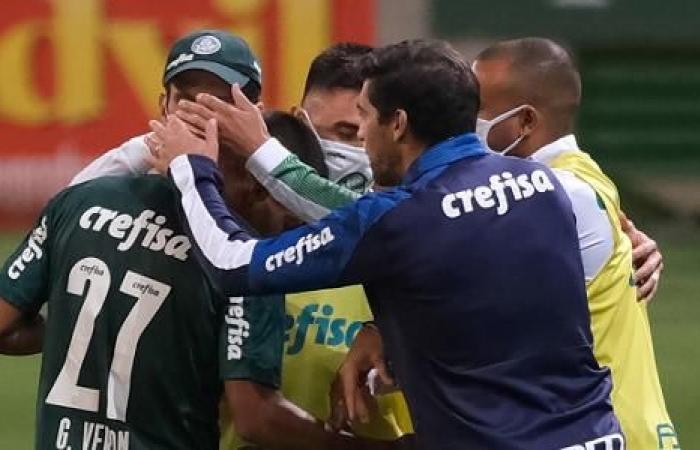 Palmeiras qualified for the quarterfinals of the Brazil Cup by winning once again Red Bull Bragantino, today (5), by 1 to 0, at Allianz Parque. Gabriel Veron scored the goal in the debut of Portuguese coach Abel Ferreira.

After winning 3-1 in the first leg, in Bragança Paulista (SP), Verdão controlled the return game and reached the fifth consecutive victory of the season. The first four were under the command of interim Andrey Lopes.

Palmeiras will know tomorrow (6) who their opponent will be in the quarterfinals of the Brazil Cup. The definition will happen by lot at CBF headquarters, at 11:30 am. The two teams return to the field at the weekend, for the Brazilian: Verdão visits Vasco, Sunday (8), at 4 pm, while Red Bull receives Santos a little later, at 6:15 pm.

In his introductory interview, Abel Ferreira said that Verdão’s left-back is “top”. For in the debut of the commander the Uruguayan maintained the good phase. It was his assistance for the goal. There are seven decisive passes in the season for jersey 17, now the biggest waiter at Palmeiras in 2020. Wesley and Gabriel Menino, both with six each, are close behind.

Born in the youth teams of Palmeiras, Luan Cândido buried Bragantino’s chances with just five minutes on the field. The left back replaced Edimar in the 14th minute of the second half, at 16 he received the first yellow card and at 19 he took the second, when he fouled Ron to kill a counterattack. The 19-year-old boy came out quite irritated, kicking everything he saw ahead.

WESLEY LEAKS AFTER HURTING THE KNEE

One of the highlights of Palmeiras in 2020, Wesley had to leave after 18 minutes of play, after hurting his left knee while trying to prevent the ball from going out from the bottom line. The boy even tried to come back, but he could not resist the pain and generates concern. Still in the bank, he started treatment, with an ice pack in place. Gabriel Veron took his place and ended up deciding.

With only two training sessions since he arrived in Brazil, Abel repeated the lineup of interim Andrey Lopes and the attitude of Verdão. Given the good advantage in the confrontation, Palmeiras played with less possession of the ball, to accelerate in counterattacks. Despite some difficulties in the first minutes, the plan worked and the goal came in an offensive transition. After making 4 to 1 on the aggregate score, the situation was very comfortable in the debut of the Portuguese coach, who analyzed more than gave orders.

Bragantino had a much better start than at Nabi Abi Chedid, where they lost 3-0 with less than 30 minutes left. Although the earlier marking gave Palmeiras a lot of work in the first minutes, the team from Bragança Paulista (SP) failed to reach the goal of Weverton with danger. Then she was punished again after losing the ball on the attacking field. The strategy did not fit the two games.

Palmeiras took great advantage of the score obtained in the first leg and started the game mainly avoiding taking risks. When he managed to fit the best counterattack, it was decisive, in the 29th minute, when Veron completed Viña’s cross and scored his fifth goal of the season.

If Bragantino was already struggling to create opportunities when he needed “only” two goals to go to penalties, the situation got worse when he lost at Allianz. In addition, Luan Cândido’s red card practically decreed the end of the game. In the final 25 minutes the intensity of the match decreased, with no great chances for either team.

PAULA’S PATRICK DOES NOT LEAVE THE BANK

Abel kept the midfielder Danilo in front of the squad ahead of Patrick de Paula. With Andrey, shirt number 28 had already had more chances than the hero of the São Paulo title, and the episode was repeated in the Portuguese debut. After placing Veron, Ramires and Willian, the coach called Danilo and Scarpa to close the list of five exchanges. Shirt 5 thus only saw the triumph of the reserve bench.

These were the details of the news Palmeiras wins Red Bull in Abel Ferreira debut and goes to... for this day. We hope that we have succeeded by giving you the full details and information. To follow all our news, you can subscribe to the alerts system or to one of our different systems to provide you with all that is new.