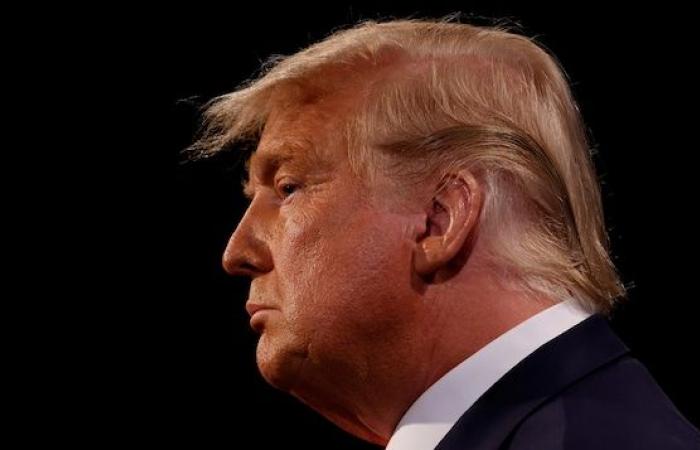 With increasingly slim chances of re-election, Donald Trump’s campaign has broadened the fronts of his battle in court. Faced with the prospect of defeat, the president and his allies have for their part stepped up accusations of electoral fraud, without providing any evidence.

The Trump campaign even issued a press release, all in all caps, which attacked the integrity of the electoral process, and whose tone and style resembled that of the President’s tweets.

Late in harvesting large voters, the outgoing president is counting on the courts to stay in the White House. After Pennsylvania, Michigan and Georgia, his lawyers on Thursday added Nevada to their legal battlegrounds, and he himself raised the threat of additional remedies.

While Mr. Trump’s remedies are not exhausted, his arguments have so far failed to convince the courts.

In the last few hours, Donald Trump has suffered three legal setbacks, especially in Michigan, where Joe Biden has already been given the winner. A judge rejected his request to suspend the count and gain greater access to the results tabulation process.

The president lost two other appeals, in Pennsylvania and Georgia, where his lead melted with the counting of mail-in ballots, which largely favors his Democratic rival. The two appeals concerned, among other things, the observation of the count.

Lawyers for Donald Trump alleged, without presenting any evidence, that ballots that arrived in Chatham County, Georgia, after the 7 p.m. deadline Monday night, may have been mixed up with valid ballots.

In Pennsylvania, the state Supreme Court overturned the decision of a lower court, which had recently ruled in favor of the Trump camp. He wanted his observers to be able to observe the count more closely in Philadelphia. A court, however, suspended until Friday the counting of around 29,000 ballots, initially sent with erroneous information in Allegheny County.

Another appeal, which has not yet been decided, seeks to reject the postal ballots bearing the postmarked November 3, but arriving after 8 p.m. The state had decided to give voters a three-day grace period, which the Republican camp had already unsuccessfully challenged in the Supreme Court before election day.

In the morning, Camp Trump opened a fourth judicial front in Nevada, where it is lagging behind.

During a press conference, his re-election team claimed, without providing evidence, that 10,000 people who no longer live in Nevada voted in the state. She refused to answer journalists’ questions.

Nevada is one of the handful of states where the tight presidential race is still pending.

Republicans are also calling for a recount in Wisconsin, also won by the Democratic candidate.

Stayed away from the cameras since his victory speech on Wednesday night, Donald Trump has expressed his frustration on Twitter, repeatedly in the past few hours.

Any vote that arrives after election day will not be counted!, he thundered.

As expected, counting postal ballots improved Democratic performance. Polls and data showed that Democratic voters, more concerned about the risks of COVID-19, would be far more likely than Republicans to mail their ballots.

Ironically, Donald Trump and his allies are calling for the counting to continue in key states where his rival has maintained his lead, such as Nevada and Arizona, but are demanding that it cease in states where he himself was leading before counting. postal ballots, ie Georgia, Michigan, Wisconsin and Pennsylvania.

According to his tweets, other legal remedies could be added to those already filed.

We will challenge in court all states recently claimed by Biden on the basis of electoral fraud and fraud in the state electoral process.

That could mean Wisconsin and Arizona would also be added to the list, but it remains to be seen if that will materialize.

WE WIN!, said Donald Trump, even if Joe Biden seems to knock on the door of the White House. According to projections by the majority of mainstream media, the Democrat won 253 voters, more than Donald Trump’s 214.

What the Trump campaign associates with a fraud move is actually the aftermath of the ballot count, a customary process that states never complete on election night. No major irregularities were reported.

In a few hours, Twitter has also attached the content label disputed and potentially misleading three tweets from President Trump.

On election night he claimed victory and threatened to turn to the Supreme Court if necessary.

These were the details of the news Counting the votes: three courts reject Trump’s claims | U.S.... for this day. We hope that we have succeeded by giving you the full details and information. To follow all our news, you can subscribe to the alerts system or to one of our different systems to provide you with all that is new.