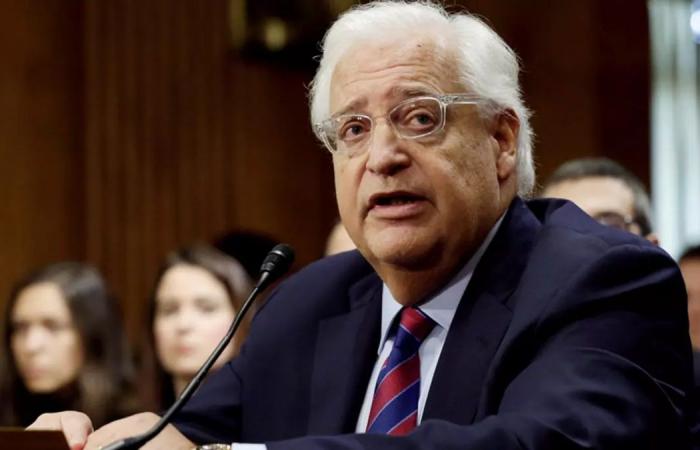 The US ambassador stated in IsraelDavid Friedman, that the Middle East region can witness radical transformations, the effects of which extend to the next 100 years, and that in the event of President Donald Trump’s re-election, he will continue his policies aimed at bringing about these transformations, adding: “We are in a position to change things in the Middle East. During the next hundred years ”.

Friedman said during an interview he gave to the “Jerusalem Post” newspaper, Sunday, and reported by other Israeli media, that more allies of the United States of America want to join the circle of peace and will continue to reap its benefits if Trump stays in the White House.

The US ambassador to Israel pointed out that the US foreign policy towards the Middle East during Trump’s term “witnessed a major transformation that none of the presidents of the United States was able to achieve in decades.” He said that Iran has come under very great pressure, and Washington’s allies have received strong support. Relationships that were damaged during the previous administration were repaired.

He pointed out that Washington had succeeded in dealing with Iranian “malicious” policies, whether in economic or military terms, while the commander of the Quds Force, Qassem Soleimani, was assassinated, and pushed the Iranian regime to a position that made it extremely weak.

No concessions to Iran

According to the “Maariv” newspaper, which quoted the dialogue in Hebrew, Friedman asserted that President Trump exerted pressure on Iran and the Palestinian Authority “because the only strategy they are currently adopting is to sit and wait for him to lose the elections.”

He pointed out that “in the event that his Democratic rival, Joe Biden, enters the White House, the policy of maximum pressure on Iran will be in danger, and Tehran is supposed to find the necessary funding sources to increase its terrorist activities,” he said.

Friedman refused to talk about the possibility of Trump adopting different policies towards Iran if he wins the elections, or working to sign an alternative agreement to the nuclear deal from which he withdrew, and he also denied that Trump was negligent on security or military issues.

And he quoted Secretary of State Mike Pompeo as statements in which he identified 12 points that he would not concede, even if there was a shift towards Tehran, including “not being silent about terrorist financing operations, or allowing progress in the ballistic missile program, not allowing it to advance in its nuclear program, and not allowing It has any adventure to take in the region. ”

Friedman referred to the “Abraham Agreement” and the Arab countries that are working to establish diplomatic relations with Israel as a top priority in the US President’s policies, including his future policies in the event that he remains president of the United States of America.

And he indicated that there are between 5 to 10 other countries that want to make peace with Israel, noting that countries in North Africa will join the march, while there are countries that do not have any relations with them, but there are increasing opportunities to take a step of this kind if Trump wins the presidential elections, as They see this as one of his priorities.

The American ambassador added that there is talk about an opportunity that has not occurred in 12 years to bypass the issue of the negotiating table and with acceptable terms, adding: “If Trump is re-elected again, I have no doubt that this will happen, at this stage I think that the public mood is moving towards stopping. Resistance and catching up, ”he said.

Friedman does not expect any decline in the levels of the American administration’s support for Israel in the event that Trump wins, and that American support for Israel is categorical and unchallenged, adding: “Israel’s enemies know that we expect it to defend itself, just as the United States of America does in front of the attacks against it. We utter empty words like: use excessive force. ”

The American ambassador rejected any talk about the “Ibrahim Agreement” between Israel, the UAE and Bahrain being a “major arms deal”, or that the UAE’s sale of US F-35 fifth-generation fighters would harm Israel’s security.

He stressed that he had not heard any talk about the fighter deal during the talks that preceded the normalization agreement, and that the UAE’s access to arms is very normal following a peace agreement, similar to what happened with Egypt and Jordan, which acquired F-16 fighters after signing peace agreements with Israel. Both of them at the time.

These were the details of the news 10 countries will sign peace agreements with Israel – Erm News for this day. We hope that we have succeeded by giving you the full details and information. To follow all our news, you can subscribe to the alerts system or to one of our different systems to provide you with all that is new.