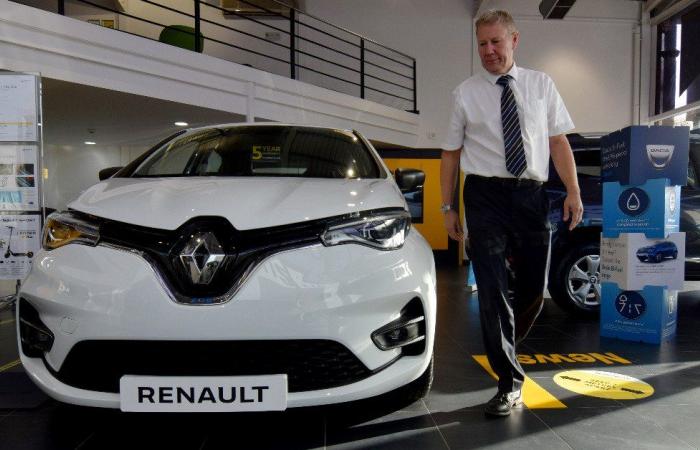 Steve Tomlin, who runs a Renault dealership in the UK, says sales of the small Zoe electric car have skyrocketed this year, a turnaround he attributes in part to a decrease in “range anxiety,” the fear of Drive out of power.

The revised model, which has accounted for a third of Tomlin’s sales for several months this year, has a range of 400 km. In contrast, the previous model, which had much less sales, offered 300km on a full charge.

“The fear of range has subsided and once you explain how easy it is to live with an EV every day, it has a big impact on sales,” said Tomlin, general manager of Martins Renault & Dacia in Reading , about 65 km west of London.

Renault told Reuters that sales of the Zoe in the UK had more than doubled this year and that in France zero-emission cars had oversold its diesel models by the end of September – 19% versus 18% – in a significant milestone.

However, the road ahead is tough, and coverage and staff training is not enough. High battery costs and lack of manufacturing size mean that electric vehicles (EVs) are still more expensive than traditional vehicles – often in the range of 20 to 30% more.

This means Renault and other automakers rely on government subsidies to support demand. However, this aid is patchy across Europe.

However, battery costs are expected to continue to fall, which means that some electric vehicles should cost the same or less than internal combustion engine models by the middle of this decade, according to industry experts.

Until then, automakers need to maintain electricity sales and build production muscles, but avoid overloading their finances while selling a product at lower margins.

Renault said its approach has been to take advantage of government subsidies and offer discounts on electric vehicles, install free charging points for customers and train staff.

In France, for example, government subsidies combined with a scrapping program and discounts from Renault can save up to € 11,500 – more than a third – of the Zoe price.

However, in addition to the financial pressures and challenges of decades of consumer behavior, Renault faces stiff competition as all automakers need to build EV sales to meet stringent EU emission limits.

While the Zoe can make sales, it was still a long way from Tesla’s Model 3 globally in the first half of the year as the race intensifies as automakers from Volkswagen AG to Toyota Motor Corp invest hundreds of billions of dollars to flood that Market with new models.

Transport & Environment, a group committed to cleaner travel, estimates that electric vehicles will triple their market share in Europe this year after accounting for 8% of European car sales in the first half of 2020.

“What has changed this year is not the subsidies, but the fact that automakers have invested and developed vehicles that are reasonably priced and performing,” said Julia Poliscanova, senior director of vehicles at Transport & Environment.

For the foreseeable future, however, subsidies are vital.

Norway has shown that massive electric vehicle subsidies, including tax breaks and lower road tolls, have worked so well that a typical small electric Nissan Leaf buyer is “an average worker aged 30 to 50,” said Frode Lehne, director of Mobile Skøyen AS, a Nissan Motor co-dealer in Oslo.

Ulf Tore Hekneby, managing director at Harald A. Moller AS, which imports many Volkswagen Group brands to Norway, said 91% of the Audis and 58% of the VW brand cars that the company sold in Norway through September this year were electric.

Some European governments are increasing their obligations.

In the summer, for example, Germany doubled its subsidies for electric cars as part of a pandemic-affected replenishment plan for an auto industry affected by the pandemic to 6,000 euros, while France increased the subsidies from 6,000 to 7,000 euros.

However, it is more difficult in other European markets with less generous subsidies or with lower incomes.

Sales in the Baltic states, for example, have suffered because the countries either do not offer subsidies or those offered are insufficient to make electric vehicles affordable, says Hekneby of Harald A. Moller, whose parent group has dealers there.

In the second quarter, 191 electric vehicles were sold across the industry in Latvia, Lithuania and Estonia, while the figure was 12,156 in Norway, although the Baltic countries combined have a slightly larger population than Norway.

These were the details of the news Renault takes on “range fear” when selling electric cars for this day. We hope that we have succeeded by giving you the full details and information. To follow all our news, you can subscribe to the alerts system or to one of our different systems to provide you with all that is new.