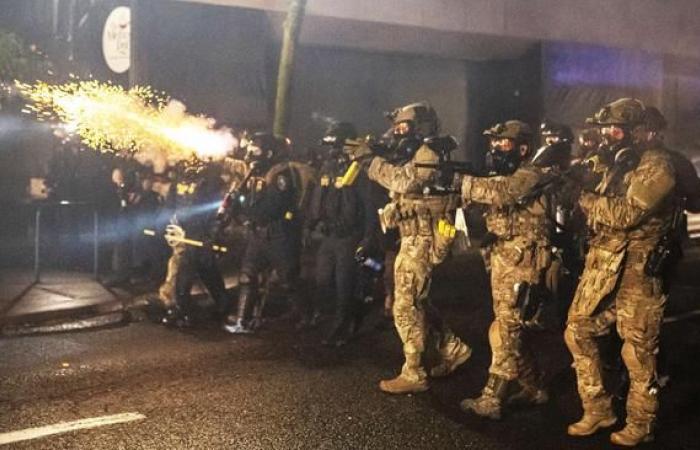 Less than two days before the most important US election in history, the deeply divided nation is on the verge.

There are fears that the tense situation in the US could turn into civil war after tomorrow’s elections. The Australian Department of Foreign Affairs and Commerce issued a “no travel” warning for the entire country.

“Protests and demonstrations continue to take place in several US cities. Avoid areas where protests are taking place due to the continuing potential for violence, ”warned the Australian government.

The most recent anti-US protests came in Portland, Oregon and Vancouver, Washington after police shot an African American man.

Dozens of demonstrators marched through Portland on Saturday, smashing shop windows and chanting “No cops, no prisons, complete abolition”.

A Starbucks, a real estate agency, a bank, two telephone shops and a hotel were loudly damaged The Oregonians.

The police acted quickly against the protest, declaring it a riot and ordering everyone to go home.

“This has been declared a riot. Members of this group have been seen damaging several businesses along NE Martin Luther King Jr. Blvd., ”Portland police announced over a loudspeaker.

“Everyone must leave the area immediately.

“Members of the group also threw projectiles at police officers and sprayed pepper spray on bystanders in the community.

Failure to follow this order could result in arrest, citation, or crowd control agents, including tear gas and / or impact weapons. Dissipate immediately. ”

Hundreds of people held a vigil for Mr Peterson on Friday as tensions surged and protesters clashed.

Police claim Mr. Peterson Jr. “made” a gun when he was approached by officers in a hotel parking lot.

Hundreds of National Guard troops are now stationed across the country in the rest of the United States to prepare for the elections.

In Texas, 1,000 soldiers are on the scene in five cities to help police “fend off any civil disturbance,” said National Guard major general James Brown.

Stores and businesses have been boarded up across the country and in cities exposed to riot and looting during the summer, including Portland, Oregon and Chicago.

“It is widely believed that after the election there will be riot regardless of who wins,” said Peter Newsham, Washington police chief The times.

“We’re all in discussions with our colleagues across the country about what to expect. But everything is uncertain. So we try as best we can to anticipate possible dangers, ”Supt Brown told the newspaper.

The riot, looting and arson damage bill in the months after George Floyd’s death on May 25 was already estimated at up to $ 2 billion. Axios reported in the last month.

More than 30 people died in the violent civil unrest, which researchers said accounted for only 7 percent of the “mostly peaceful” protests across the country.

In the past few days, there has been renewed riots in Philadelphia, north of Washington, over Black Lives Matter, with thousands of looters spending several nights searching large parts of the city after police shot an African American man.

Last Thursday, Walmart announced that it would remove all guns and ammunition from its retail space – the country’s largest retailer sells firearms in roughly half of its 4,700 U.S. locations – to deter possible theft if its stores are ransacked amid civil unrest.

People of all races and walks of life have stocked up on military-style weapons and tactical equipment as fearful Americans prepare to settle down. Many gun shops are out of ammunition and gun supplies are running low.

Mr Trump sparked a backlash last month after refusing to answer whether he would “commit to a peaceful transfer of power” – oddly enough, the reporter asked if he would “win, lose or tie” during one Press conference at the White House.

“We have to see what happens,” said the President. “You know I complained very badly about the ballots, and the ballots are a disaster.”

White House press secretary Kayleigh McEnany then tried to allay concerns and insisted that Mr. Trump “would accept the outcome of a free and fair election.” “He will accept the will of the American people,” she told reporters.

Two researchers, Peter Turchin and Jack Goldstone, warn that America is on the brink of a second civil war amid growing inequality and social division – and that the 2020 election is the potential “fire starter” event.

Professor Turchin, an evolutionary anthropologist from the University of Connecticut, and Professor Goldstone, a sociologist from George Mason University, developed a statistical model that links inequality to political instability.

They argue that the Political Stress Indicator (PSI) is currently predicting serious problems for the US, regardless of the outcome. “If these trends continue after Trump’s departure, the risks and incidence of violence are likely to continue,” Prof. Goldstone told BuzzFeed. “I worry about it no matter who wins. The social problems are the gasoline. Trump throws matches. ”

In an article recently published by the Berggruen Institute think tank, the couple called the impending chaos “the turbulent twenties.”

“Given the protests against Black Lives Matter and the cascading clashes between competing armed factions in cities across the United States, from Portland, Oregon to Kenosha, Wisconsin, we are well on our way there,” they wrote. “But worse is probably ahead of us.”

As Profs Turchin and Goldstone explain in their contribution, there are several election results that could “spark mass violence”.

“If Trump wins narrowly in the electoral college but loses the referendum by a wide margin, there will certainly be massive demonstrations protesting the result, calling it illegitimate and demanding loyalty to the will of the majority of Americans,” they write.

“If Trump loses, he will likely deny the result as a ‘rigged’ election. But this action will again lead to massive popular protests, this time to insist that the election results be honored. ”

These were the details of the news “Civil unrest”, violent protests expected, fear of civil war for this day. We hope that we have succeeded by giving you the full details and information. To follow all our news, you can subscribe to the alerts system or to one of our different systems to provide you with all that is new.