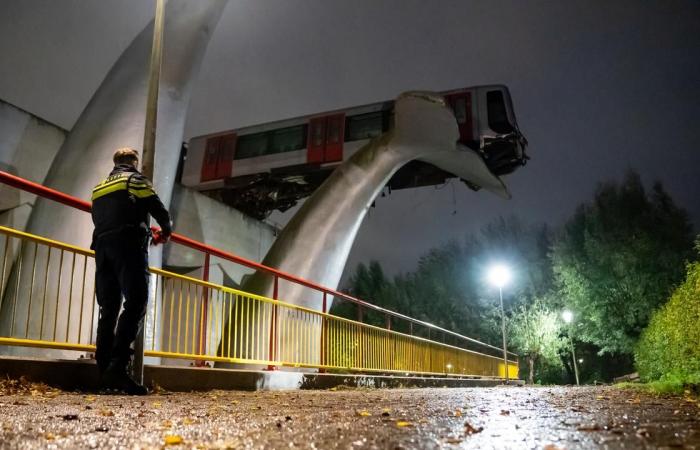 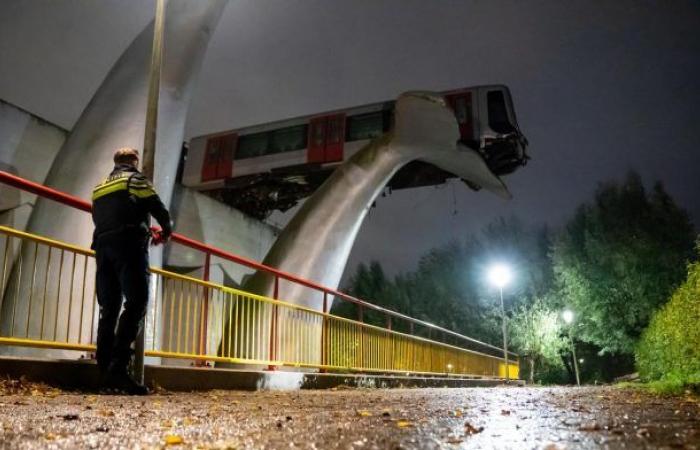 At metro station De Akkers in Spijkenisse, a metro shot through a stop block in the night from Sunday to Monday. The vehicle has landed on a work of art and is suspended at a height of approximately ten meters. No one was hurt.

The accident happened around 12:30 am Monday morning and emergency services have been mobilized en masse. There were no passengers on the subway at the end of its shift. The operator was not injured and was able to leave the vehicle independently. According to a spokesperson for the Rotterdam transport company RET, the driver was transported to hospital as a precaution.

The De Akkers metro station in Spijkenisse is the terminus of metro lines C (from Capelle aan den IJssel) and D (Rotterdam). At the end of the track, the so-called ‘tail track’, is the artwork Whale tails by architect and visual artist Maarten Struijs. They are two huge polyester whale tails. The metro train has come to a stop on one of its tails.

The spokesman for the RET could not yet say anything about the cause of the accident and whether the track security was functioning properly. This will be discussed on Monday with the Rotterdam Rijnmond safety region. It will also be examined how the trainset can be stored safely.

Since the accident occurred at the end of the metro track, the RET spokesperson thinks it will have no effect on Monday’s timetable.

These were the details of the news Metro shoots through stop block in Spijkenisse and hangs at a... for this day. We hope that we have succeeded by giving you the full details and information. To follow all our news, you can subscribe to the alerts system or to one of our different systems to provide you with all that is new.