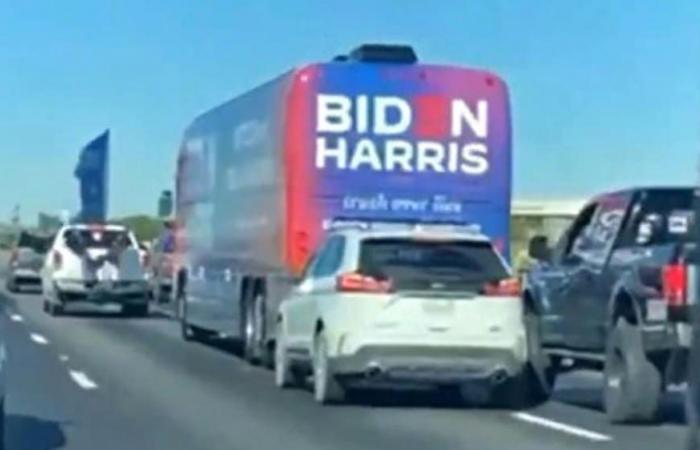 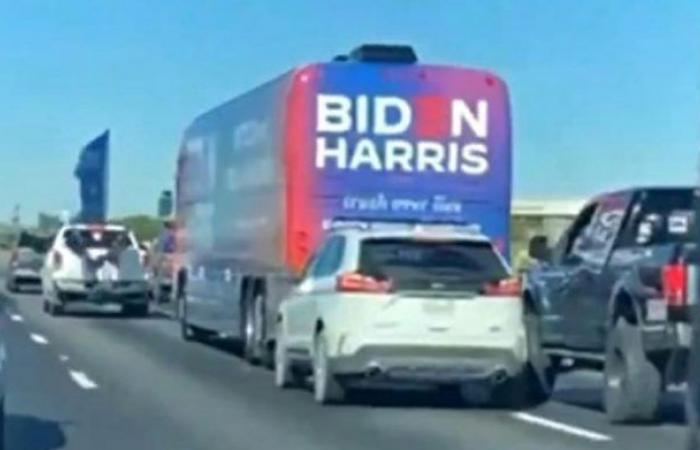 On a highway in the US state of Texas, a dangerous incident occurred over the weekend around a column of campaign vehicles of the Democratic presidential candidate Joe Biden (77).

Several vehicles from supporters of US President Donald Trump (74) tried to slow down a Democratic campaign bus and push it off the street, said Biden’s campaign team. As reported in the US media, citing the FBI, the federal police are now also dealing with a scene recorded on several Twitter videos that occurred on Saturday.

The footage shows how a white SUV and a black pickup truck immediately behind the bus on Interstate 35 in Texas touch and try to push each other at high speed. From which car the contact originated cannot be clearly seen on the videos.

Neither Biden nor his runner-up Kamala Harris (56) were in the vehicle. According to a newspaper report in the Texas Tribune, the candidate for the US House of Representatives and former Senator of the state of Texas, Wendy Davis, was in the car. All inmates were uninjured.

Trump shared a video on his Twitter account showing the column of vehicles around the bus, but not the collision of the two cars. Trump wrote: “I love Texas!” In response to the FBI investigation, he wrote on Sunday evening (local time): “In my opinion, these patriots did nothing wrong.”

According to US media reports, the Democrats canceled planned events in Texas because of security concerns. Biden and Trump are still close together in the state shortly before the US election on Tuesday, according to surveys. Texas used to be a Republican stronghold. (SDA / kes)

*The article has been translated based on the content of Source link by https://www.blick.ch/news/ausland/auf-schnellstrasse-in-texas-trump-anhaenger-rammen-bidens-wahlkampffahrzeug-id16174110.html
. If there is any problem regarding the content, copyright, please leave a report below the article. We will try to process as quickly as possible to protect the rights of the author. Thank you very much!

These were the details of the news Trump supporters attempt to ram Biden bus off highway for this day. We hope that we have succeeded by giving you the full details and information. To follow all our news, you can subscribe to the alerts system or to one of our different systems to provide you with all that is new.