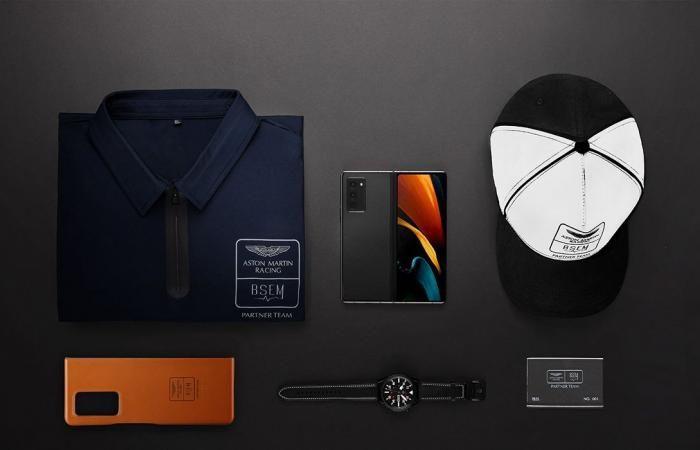 The Korean giant is preparing to launch a new limited edition of the Galaxy Z Fold 2, which was developed in cooperation with Aston Martin, and which is launched exclusively in the Chinese market.

The Ice Universe page published a new tweet on Twitter, through which the Galaxy Z Fold 2 Aston Martin images were revealed on Twitter, which clarified the design of the phone before the official announcement.

The images of the Galaxy Z Fold 2 Aston Martin show the design of the packaging box, which comes in a gray color at the top with the words Galaxy Z Fold 2 5G and Galaxy Watch3, so the group does not include the Galaxy Buds Live, unlike the Thom Browne version. Tmall is also appearing at the bottom so it will be available via Tmall in the Chinese market.

Inside the box there is a black Galaxy Z Fold 2 phone with the Aston Martin logo, and the user gets an Aston Martin orange leather case.

There’s also an Aston Martin polo shirt in navy blue, a black and white baseball cap, and the Mystic Black Galaxy Watch3 included in the box.

These were the details of the news Aston Martin limited edition Galaxy Z Fold 2 launches exclusively in... for this day. We hope that we have succeeded by giving you the full details and information. To follow all our news, you can subscribe to the alerts system or to one of our different systems to provide you with all that is new.