The pandemic increasingly locks up Europe and increases satiety 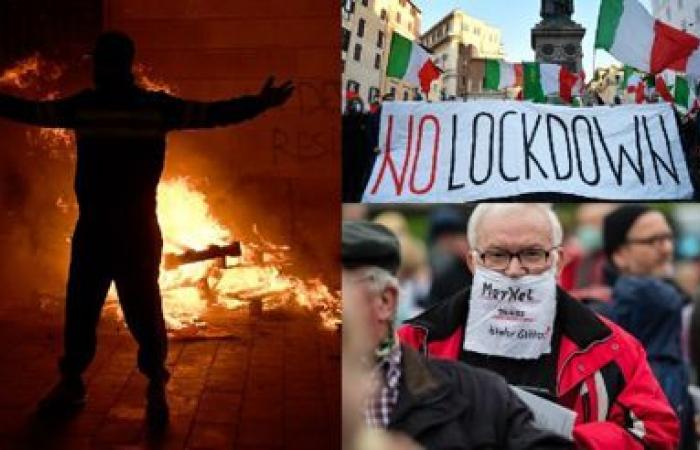 Europe confines itself and takes increasingly severe measures in the face of a pandemic that leaves more than 45.7 million infections and almost 1.2 million deaths in the world, 400,000 of them in Latin America, in the midst of a growing boredom of people protesting against a situation that at the moment seems dead-end.

Spain lived a second night of riots in several cities in protest against the confinement measures, an example of the growing fatigue and exasperation of the population in a Europe that imposes more and more restrictions to combat the second wave of the coronavirus pandemic.

Austria announced on Saturday a new lockdown starting Tuesday, while England reported a similar measure as of next Thursday and Greece issued a partial quarantine.

The new confinement in Austria, which includes a curfew between 8:00 p.m. and 6:00 a.m. local time as well as the closure of restaurants, cafes, hotels, cultural and sports institutions, will run until the end of November, Conservative Chancellor Sebastian Kurz said at a press conference in Vienna.

For his part, the British Prime Minister Boris Johnson, announced that England will return to home confinement from Thursday until December 2. “We have to be humble before nature,” Johnson said at a press conference, adding that all non-essential businesses will close and the English will not be able to leave home except for essential issues such as buying food or going to the doctor. Schools and universities will however remain open.

Portugal announced a partial confinement that affects 70% of the population, as well as Greece, whose prime minister Kyriakos Mitsotakis urged “act now”, before intensive care units are overwhelmed.

During the Greek lockdown, which will begin on Tuesday, circulation will be prohibited from midnight to 05:00 local time. The restaurants, bars and entertainment venues in Athens and other cities will remain closed. The rest of the country will have to comply with the night curfew and the mandatory use of a mask even outdoors.

While, Slovakia An ambitious coronavirus detection program with rapid-result antigen tests began on Saturday. Some 45,000 health, army and police professionals were deployed to carry out the tests, collecting samples at some 5,000 detection points.

Prime Minister Igor Matovic estimated that the measure will save “hundreds of lives”, but the Slovak Association of Family Physicians considered that the plan is poorly prepared, since the overcrowding at the test sites works against the protocols to prevent contagions.

In other countries, where confinements have already been imposed, with different levels of severity, there is growing discontent among some citizens over these types of restrictions.

In Spain, protesters clashed with the police in central Barcelona on Friday after hundreds of people gathered to denounce the new measures, which include a curfew and a ban on leaving the city during this weekend of All Saints.

And in Italy, the mayor of Florence He called for calm after violent clashes Saturday between police and protesters.

The United States faces an acceleration of the pandemic, with a new daily record of more than 94,000 infections, according to a count by Johns Hopkins University, as the elections approach next Tuesday.

President Donald Trump, who is running for reelection, does not tire of minimizing the severity of covid-19, from which he himself caught and recovered. “We just want to get back to normal,” he said. “If you catch it, you will get better and then you will be immune,” he told supporters in Michigan on Friday.

– Wrath of the merchants –

After a curfew in several regions, the closure of bars and restaurants at 6:00 p.m., gyms, cinemas and concert halls, the Italian government plans to announce a lockdown of the big cities on Monday, according to the press. “The epidemiological curve is still very high,” declared the Minister of Health, Roberto Speranza.

In France, reconfigured from Friday for a month, increases the anger of traders considered non-essential and therefore forced to close. They denounce the unfair competition from large supermarkets, authorized to remain open, and from online platforms, such as Amazon.

The prime minister could decide to close in supermarkets “the shelves of products that are not essential”, announced on Sunday the Minister of Economy, Bruno Le Maire.

While, Latin America and the Caribbean, which with 11.2 million infections is the region with the most cases of covid-19, surpassed the threshold of 400,000 deaths from the virus on Friday.

In Mexico, the government dedicated an altar of the traditional Day of the Dead -which is celebrated in several Latin American countries- to the little more than 90,000 deaths that the covid-19 has left in the country, and also decreed three days of national mourning in its memory.

“With this offering attached to customs that come from afar, we remember the deceased children and adults,” said the president Andrés Manuel López Obrador by presenting the offering on Saturday.

But several Mexican cemeteries will remain closed, as in other countries in the region. (AFP)

If the pandemic brought something good, it was the use of bicycles by Peruvians, achieving their sales at the highest level in the last decade.

These were the details of the news The pandemic increasingly locks up Europe and increases satiety for this day. We hope that we have succeeded by giving you the full details and information. To follow all our news, you can subscribe to the alerts system or to one of our different systems to provide you with all that is new.