Watch the full scenes of Kahraba and Mohamed Fadl from the... 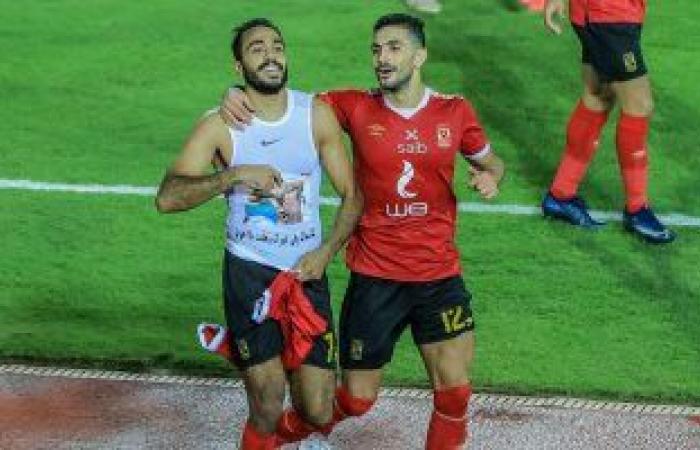 The Super Ball lens spotted the scenes of the altercation that broke out between Mahmoud Abdel Moneim Kahraba, the Al-Ahly player, and Mohamed Fadl, a member of the five-year committee in charge of managing the Football Association, during the crowning of Al-Ahmar with the 42nd league shield in the history of the Red Castle.

To watch the video via Super Kora Press here..

Al-Ahly club refused to impose any penalties, either by suspension or fines, on Mahmoud Abdel-Moneim Kahraba, the team’s wing, after his quarrel with Muhammad Fadl, a member of the Five-Year Committee, before receiving the shield of the General League championship after the end of the Talaa Al-Jaish match yesterday.

A source at Al-Ahly told “Super Kora”: “There is no intention to impose a penalty on electricity … the matter is nothing more than a minor argument over some organizational matters during the meeting and the dispute between the two parties quickly ended and Muhammad Fadl handed over the league shield naturally in the presence of Kahraba.”

Muhammad Fadl intends to present an official memorandum against Mahmoud Kahraba to the Disciplinary Committee in Jabalia due to the incident that arose between them during the pretext that Kahraba violated the protocol for the coronation ceremony and was present in the officials and not the players’ area.

Hossam Al-Badri, the coach of the Egyptian national team, is discussing the exclusion of Mahmoud Kahraba, the Al-Ahly player, from the list of the Pharaohs in the November camp, due to his altercation with Muhammad Fadl, and Hossam Al-Badri preferred to delay the announcement of the list of Al-Ahly players in the Egyptian national team during the November camp until the fate of Kahraba is finally resolved.

These were the details of the news Watch the full scenes of Kahraba and Mohamed Fadl from the... for this day. We hope that we have succeeded by giving you the full details and information. To follow all our news, you can subscribe to the alerts system or to one of our different systems to provide you with all that is new.