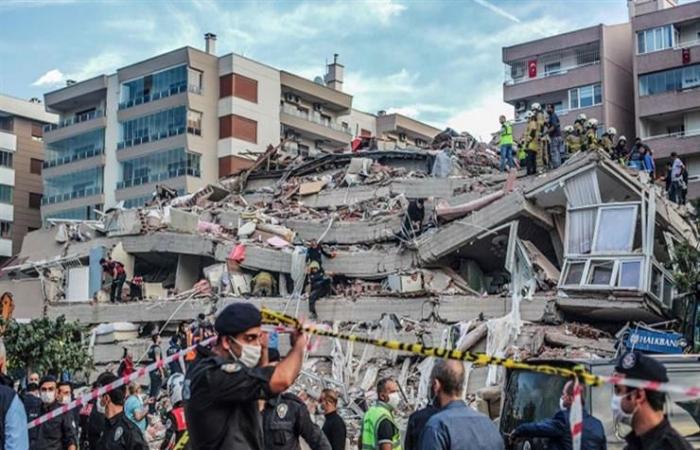 I wrote – Iman Mahmoud
On Friday afternoon, Izmir, the third largest city and the second largest port in western Turkey, witnessed a violent earthquake with a magnitude of 6.6, leaving behind many victims and heavy material losses.
On Saturday, the disaster management in Turkey announced that the death toll from the earthquake had risen to 26, and 804 injured.
According to “reported”, a five-magnitude aftershock occurred this morning in Sverihisar district, in Izmir.

The quake struck at 03:01 pm (12:01 GMT) at a depth of 16.5 km in Sverihisar, causing sea levels to rise. The earthquake was followed by 19 aftershocks, yesterday, according to what was reported by the official Turkish “Anatolia” agency.
Search crews were able to rescue many citizens and pull them out alive from the rubble, and search and rescue operations are still continuing in dozens of destroyed buildings.

Turkish websites also carried pictures of footage of the flooded streets, cars and boats that were dragged away, as well as restaurants and workplaces that were destroyed, and several cars were buried under the rubble.

As for the Turkish newspaper “Daily Sabah”, it published video clips to recover a woman, after she spent about 17 hours under the rubble.

It also posted another video of a building damaged in the earthquake, collapsing completely and destroying the surrounding buildings.

And video clips were also spread to save animals, if “Turkey Now” said that rescue teams had pulled a girl and her dog alive from the rubble, and “Daily Sabah” published a video clip to save a cat from under the rubble.

Turkey is located in one of the most earthquake-prone regions in the world. And in 1999, a 74-magnitude earthquake struck areas in northwestern Turkey, killing more than 17,000 people, including 1,000 in Istanbul.

In 2011, an earthquake struck the southeastern province of Van, killing more than 600 people.

The earthquake was felt by residents of the eastern Greek islands in addition to the island of Crete, in the Mediterranean, and the Greek capital, Athens, and some parts of Bulgaria, while it was also felt by residents of Turkish Istanbul, whose governor said that there were no reports of damage in the city, which is the largest in Turkey.
Two teenagers also died on the Greek island of Samos, after a wall fell on them.

For its part, Egypt expressed, on Saturday, its sincere condolences to the victims of the earthquake that struck the Aegean region yesterday, which resulted in casualties as well as hundreds of injuries in both the Turkish province of Izmir and the Greek island of Samos, in addition to the occurrence of severe material damage.
In a statement by the Ministry of Foreign Affairs, Egypt offered its condolences to the families of the innocent victims in Greece and Turkey, with sincere wishes for a speedy recovery for the injured.

These were the details of the news Turkey earthquake: dead, drowned streets, and animals under the rubble (video,... for this day. We hope that we have succeeded by giving you the full details and information. To follow all our news, you can subscribe to the alerts system or to one of our different systems to provide you with all that is new.