France: The Avignon incident is not a terrorist act .. Arab... 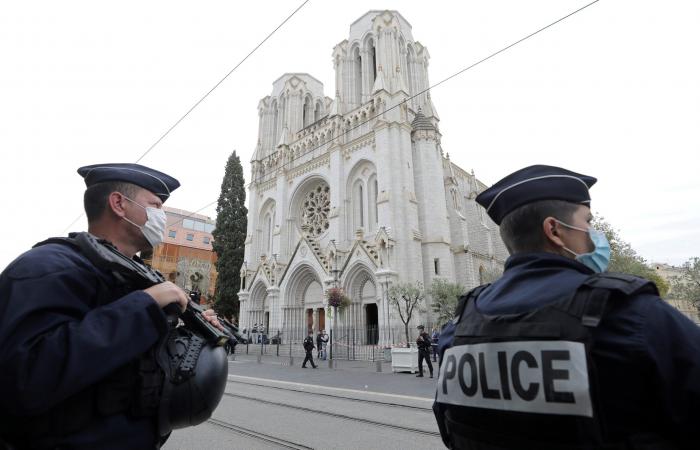 The French government announced that the incident in the southern city of Avignon will not be investigated as a terrorist attack, unlike its view of the stabbing incident in Nice (southeast), which occurred hours before it.

The French Attorney General, Philippe Guemas, stated that the suspect, who was shot dead by the police; Because he did not lay down his weapons, he was wearing a jacket with the words Defending Europe written on it, which belongs to the far-right identity movement.

The attorney general’s statement stated that the attacker, who is of North African descent, was suffering from a psychological problem and therefore the incident would not be investigated as a terrorist attack.

In the first moments of the incident, the country’s mainstream media wrote that the attacker threatened passers-by with a large knife, saying God is Great, but the public prosecutor said: The attacker was a white French in his thirties, wearing a jacket from the far-right identity movement and certainly did not shout God is great.

While the Prosecutor did not provide any information about the identity of the attacker after these statements, President Emmanuel Macron did not make any statements about this attack.

On the other hand, a person who was attacked confirmed that the person who pointed the knife at him was wearing the clothes of the extremist Yemeni identity movement, indicating that he delivered the Nazi salute before pointing the weapon at him.

وقال International Union of Muslim ScholarsHe condemns and denounces this heinous barbaric crime, regardless of its perpetrator, whatever his motives and objectives, according to a statement by its Secretary General Ali Al-Qaradaghi, and its president, Ahmed Raissouni.

The union added, that it affirms once again the innocence of Islam and the nation of Islam from this criminal act, and that true Islam – embodied in the common Muslims, their scholars and institutions – considers such actions as strictly forbidden and deviating from the principles, values ​​and rulings of Islam.

As confirmed Al-Azhar, In a statement in the name of his Sheikh Ahmed Al-Tayeb, condemning the deeply hateful terrorist attack, which took place Thursday morning, near Notre Dame Church in Nice.

Al-Tayyib added: There is in no way a justification for those hateful terrorist acts that are inconsistent with the tolerant teachings of Islam and all divine religions.

و .عربت General Secretariat of the Council of Senior Scholars in Saudi Arabia Its strong condemnation of the terrorist attack that took place near Notre Dame.

The secretariat clarified, in a statement, that terrorism is condemned regardless of its source and under any pretext, and that the duty of the wise is to call upon what broadcasts the spirit of tolerance and constructive cooperation in the world.

وحذر The Sunni Endowment Office in Iraq (Official and linked to the Council of Ministers), from the escalation of violence and hatred speech globally, while condemning at the same time the stabbing incident in France.

The head of the court, Saad Kampash, said in a statement that the Sunni Endowment Bureau warns of the escalation of violence and hatred speech, expressing its strong condemnation of the hateful terrorist attack that took place this morning, Thursday, near Notre Dame Church.

و .عربت Qatar, In a statement issued by its Ministry of Foreign Affairs, about its strong condemnation and denunciation of the stabbing incident that took place inside a church in the French city of Nice, which resulted in deaths and injuries.

Well condemned Jordan The stabbing incident, and the Foreign Ministry spokesman, Dhaif Allah Al-Fayez, confirmed, in a statement, the Kingdom’s condemnation and condemnation of this terrorist crime.

Al-Fayez denounced all forms of violence and terrorism that target without discrimination everyone, aim to destabilize security and stability, and are inconsistent with religious and humanitarian values ​​and principles.

As head said The Lebanese government Designated Saad Hariri: The strongest condemnation and denunciation of the heinous criminal attack on Notre Dame Church.

Hariri added, via Twitter: Terrorism has no religion, and all Muslims are called to reject this criminal act that does not belong to Islam or to the Prophet of love, in memory of his honorable birth, with any religious, moral and human connection.

و .عربت TunisiaOn its strong condemnation of the terrorist act, which took place in Nice, France, warning against its use in linking terrorism with religions.

And Tunisia warned, in a statement, of the consequences of moving forward with the ideological and political employment of sacred things and religions and linking them to terrorism.

Ministry condemned Libyan Foreign MinistryThe attack that took place in the city of Nice, and offered its condolences to the relatives of those who died in this attack.

The ministry confirmed through a tweet, that there is no justification for killing innocent people or violence against them, especially in a place of worship, and for its rejection of all kinds of terrorism and violence.

وأدان Morocco, West, sunsetThe attack on Notre Dame Church, and expressed its solidarity and sympathy with the victims and their families, according to a statement by the Ministry of Foreign Affairs, African Cooperation and Moroccans living abroad.

The statement stated that the Kingdom of Morocco calls for a way to overcome the negative context and the tense climate around religion, and urges the various parties to demonstrate the spirit of moderation, wisdom and respect for the other.

She also said Kuwait On its strong condemnation and denunciation of the heinous terrorist crime that took place today, Thursday, in Nice, France.

In a statement, the Ministry of Foreign Affairs affirmed the State of Kuwait’s principled and firm stance against all forms of terrorism and extremism, and violence that is rejected by all divine religions and human values ​​and is criminalized by international laws and norms.

And condemned the Kingdom of Foreign Ministry the two seasThe attack on Notre Dame Church, and confirmed the Kingdom’s solidarity with the friendly French Republic.

In a statement, the Ministry of Foreign Affairs reiterated the Kingdom of Bahrain’s steadfast position rejecting all forms of violence, extremism and terrorism, regardless of their motives or justifications, which are inconsistent with all human values ​​and principles.

He also condemned To whomThe heinous terrorist attack that killed three French, in the French city of Nice.

The Yemeni Ministry of Foreign Affairs said in a statement that these criminal acts have nothing to do with any religion, and are considered uncharacteristic and criminal behavior in all divine laws and laws, and are completely inconsistent with the values ​​of the true Islamic religion.

Earlier Thursday, the French police said that a knife attack targeted the Notre Dame church in central Nice, resulting in 3 deaths, including two who were killed inside the church, and another when he tried to flee abroad, according to the local BFM network.

The Office of the National Anti-Terrorism Prosecutor in France announced the opening of an investigation into the stabbing case, as an assassination attempt linked to a terrorist institution.

The Mayor of Nice, Christian Estrosi, hinted, in a televised statement, that the incident was linked to Islam, by saying that the attacker (who was arrested) was shouting God Akbar repeatedly after the police hit him.

Macron described the incident as an Islamist terrorist attack, expressing solidarity with the Catholics in his country.

During the past few days, France has witnessed the publication of insulting pictures and cartoons of the Prophet Muhammad, through the media, and displaying them on the facades of some buildings, which sparked a wave of anger throughout the Islamic world.

On October 21, French President Emmanuel Macron said that his country would not abandon the cartoons, which doubled the wave of anger in the Islamic world, and campaigns were launched in some countries to boycott French products and goods.

These were the details of the news France: The Avignon incident is not a terrorist act .. Arab... for this day. We hope that we have succeeded by giving you the full details and information. To follow all our news, you can subscribe to the alerts system or to one of our different systems to provide you with all that is new.