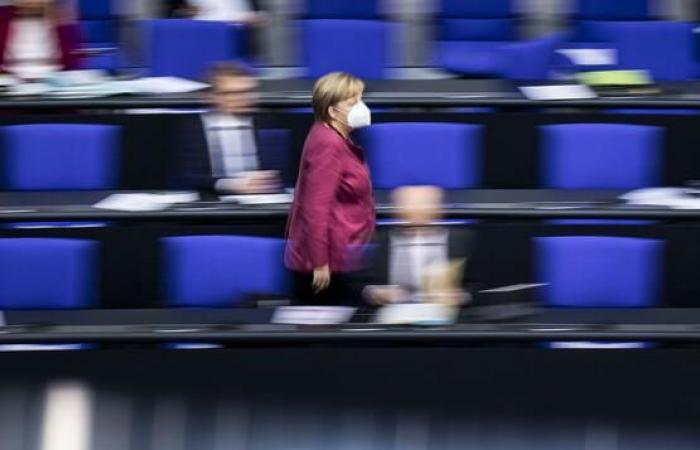 Wolfgang Schäuble’s authority wobbles. That says everything about this day when morality in the German Bundestag is on the brink. Schäuble, who has been a member of the Bundestag for the CDU for 48 years and President of the House, has to help Chancellor Angela Merkel. Their government statement is interrupted again and again by AfD MPs with wild roars, whose parliamentary group leader Alexander Gauland later says that Germany is on a direct path to the “Corona” dictatorship.

Merkel takes breaks again and again, ignoring hostility and shouts like: “We are parliament.” Someone from the SPD parliamentary group yells: “Shut up.” After a five-minute government statement, Schäuble stops the drama. “Wait a minute,” he says, the country and all of Europe are in an exceptionally difficult position. But, and that almost never happens, Schäuble also reaps AfD heckling. His voice is loud by his standards: “If you interrupt the President, you will immediately get calls to order, that is dangerous.”

It’s a day in the German Bundestag that gives a foretaste of an uncomfortable autumn and winter. Especially for Angela Merkel. The Chancellor does not initially take off her white FFP2 mask from her place on the government bench, she tries to be a role model.

In her government statement, Merkel defends the unanimous federal / state resolutions of the previous day. A member of the government says that two weeks ago there was talk of her crumbling power, now she has prevailed against the prime ministers in full line with her lockdown plans. It conjures up the “dramatic situation”; the enormous dynamic in the number of infections and intensive care patients. The virus affects everyone without exception.

Nobody knows how this experiment will end. Whether the resolutions for a so-called breakwater lockdown will work from Monday. What economic damage they leave behind – and whether the support for Merkel’s path remains as great as at the beginning of the pandemic. The state chancelleries are now also receiving letters of protest from affected pubs, artists and restaurateurs.

“We have made every effort to keep daycare centers and schools open,” says Merkel. That gives a lot of applause. She understands the frustration, the desperation in the areas that will be closed for four weeks, but the hygiene concepts are not free and will be needed even more afterwards.

“Lies and disinformation, conspiracies and hatred not only damage the democratic debate, but also the fight against the virus,” she says to the AfD. The measures are “suitable, necessary and proportionate. If we, “dear colleagues, would wait until the intensive care units are full, then it would be too late.” She warns against “populist trivialization” and wishful thinking. “Winter will be difficult,” says Merkel, and that also applies to her and her Corona policy.

It remains unusually emotional. Ralph Brinkhaus taps the desk with his right index finger so hard that it can be heard up to the top of the grandstand. The man has anger in his stomach, the Union parliamentary group leader takes on someone he sees on the wrong track, who could have governed but did not want to.

“Unworthy, your predecessors would have been ashamed,” Brinkhaus yells at the FDP chairman Christian Lindner.

Lindner had previously drawn the picture of a deformed democracy, a chancellor who, together with the prime minister, made very far-reaching decisions alone, bypassed parliament and of corona measures that are completely disproportionate. “The German Bundestag can only take note of the decision retrospectively”, Lindner criticizes the federal-state decision for a “breakwater” lockdown from next Monday. “Chancellor, you say that debate strengthens democracy. For this, the debate must take place here before the decision is made ”. The restrictions are largely unnecessary and unfair to the people affected, especially to restaurateurs who have invested a lot in hygiene concepts. People wanted to work, the state could not “finance the standstill” on a permanent basis. That was actionist crisis management, what came next, house searches so that fewer people could get infected in private? “That must be the last lockdown.”

Lindner gets a lot of applause from its own people, and from another faction: the AfD. The day in the German Bundestag after the Corona resolutions shows: The rift is getting deeper between the supporters of a new partial lockdown and the doubters.

“The Lindner is looking for his topic”, etches one from the North Rhine-Westphalian government apparatus. Because there, as part of the state government, the FDP supported the resolutions of the federal-state corona summit before Chancellor Angela Merkel’s (CDU) government declaration, in a morning telephone call.

By phone, because Prime Minister Armin Laschet (CDU) is in Berlin, he is sitting with the Rhineland-Palatinate Prime Minister Malu Dreyer (SPD) on the Bundesratsbank in the front of the plenum. It is a signal: we decided yesterday together and unanimously that there is no undermining democracy, as suggested by AfD parliamentary group leader Gauland.

“Fear is a bad advisor”

He thinks that Germany has achieved its freedom with too much effort “for us to hand it over to the cloakroom of an emergency cabinet”. He draws the following comparison: “There is a simple solution to reduce the number of road deaths to zero: You do away with street worship.”

You have to accept deaths, also from Corona. The “number of infections bombardment” is intended to promote fear. “Fear is a bad advisor.” In the refugee crisis it was exactly the other way around – the AfD fueled fear of migrants and refugees.

Gauland quotes the controversial constitutional lawyer Carl Schmitt, who wrote, “Whoever decides on a state of emergency is sovereign”. Gauland zu Merkel: “May I remind you that the sovereign is the German people, represented by the German Bundestag.”

He and Lindner, however, are repeatedly reminded that the resolutions are implemented primarily at the state level, by cabinets and parliaments. In Schleswig-Holstein, Rhineland-Palatinate and North Rhine-Westphalia, the Liberals sit at the government table.

“I am proud of this country and I am proud of what is being done here,” calls Union parliamentary group leader Brinkhaus. “We are fighting this pandemic.” Together – he points towards Laschet, who is actually good at Lindner. One expects a lot from the people, but also provides further billions in aid, so Brinkhaus. In addition, there is a separation of powers in this country, the implementation of many resolutions is up to the countries, this has been regulated so far. “I can’t say: Dear Covid-19, take a break, we have to readjust our federal-state relations first.”

And CSU regional group leader Alexander Dobrindt peppers Lindner something later: Because the Lord Mayor of Landshut (Bavaria), Alexander Putz, announced his departure from the FDP on Wednesday: He continues as a non-party mayor – because of Lindner. His course is not compatible with his convictions and his actions on site.

In his opinion, the current line of the FDP reinforces “the division in the population, which is currently increasing,” he told the “Passauer Neue Presse”. The attempt to make political capital out of doubts about the Corona measures is not responsible political action for him in this historical crisis. “My claim to ‘my FDP’ is and has always been different.”

“We need solidarity from everyone.”

Finance Minister Olaf Scholz is almost only reading files that day. Although he has promised financial aid for the solo self-employed and industries affected by the recent lockdown of up to ten billion euros, the details have been haggled for a long time. In addition, the help of up to 75 percent of sales in the same month of the previous year should be offset against short-time work benefits and other help. People should not be endangered in their existence, warns Rhineland-Palatinate Prime Minister Dreyer in the Bundestag, also in the direction of her party friend Scholz. She assumes that “everyone keeps their word and we have this help immediately. We need solidarity from everyone. “

Merkel has had a harder time getting through with her appeals and so she is using a special trick on this day. So that people understand why these measures are to be taken, she quotes the science journalist Mai Thi Nguyen-Kim from a television interview, which she, Merkel, could never express so clearly, but “which at the same time describes my deep conviction”.

That is why she wants to take it up here now, it was about getting into the virus, if it could think, and so Merkel Mai quotes Thi Nguyen-Kim: “I have the perfect host here. These people, who live all over the planet, who are globally networked, are social beings who cannot live without social contacts. They have a hedonistic disposition, they like to go out to party, so it couldn’t be better ”.

And further she said: “No virus, didn’t you learn from human evolution at all? We have shown several times that we are damn good at adapting to difficult situations. We will show you that you have chosen the wrong host. “

Merkel emphasizes that this is exactly what it is all about, people have already overcome many major crises. Everyone can now actively help to survive this phase – and ultimately save lives. “Contribute actively: In this case, that means doing without any contact that is not absolutely necessary.”

These were the details of the news Deep corona crack in the Bundestag: Merkel’s lockdown plan meets roaring... for this day. We hope that we have succeeded by giving you the full details and information. To follow all our news, you can subscribe to the alerts system or to one of our different systems to provide you with all that is new.

NEXT It's up to Afghan people to decide their future, says Biden as US to complete pullout by Aug. 31