Onion made Palmeiras to be Palmeiras. Abel Ferreira very close... 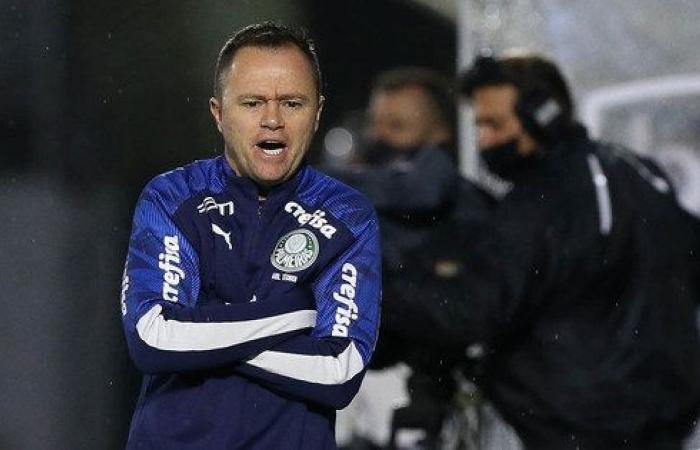 The directors of Palmeiras were enthusiastic.

There was a certainty that the Portuguese Abel Ferreira would promote a commotion in the press and in the fans of Palmeiras.

For the good work at Braga.

For the modern way in which he assembles his team.

As you are doing at PAOK, from Greece.

Starting from 3-4-3, facing any opponent offensively.

The deal has a huge chance of being closed and announced tomorrow.

But on social media, in the Deliberative Council and for the players, there is a lot of satisfaction with Andrey Lopes.

Under the command of Cebola, Palmeiras beat Red Bull Bragantino by 3 to 1, in Bragança, in the first eliminatory match of the round of 16 of the Brazil Cup.

In the first half, that the team opened the advantage of 3 to 0, the ‘Carousel do Cebola’, as the internet users joked, worked very well.

With a fast, objective, intelligent team, he attracted Mauricio Barbieri’s Bragantino and explored the advanced stance of his last line, who tried to put pressure on Palmeiras in his field.

And that was how Raphael Veiga, Wesley and Luiz Adriano scored without difficulty. With the interior defensive system wide open.

In the second half, the physical side weighed. Palmeiras got tired. And he felt the lawn heavy. As well as the effectiveness of penetrations, Bragantino’s block advances started to work.

Hurtado took it out.

But the team that supported Cebolismo won, overcame the pressure that Barbieri dreamed of doing and surprise Palmeiras.

The victory, the third in a row, caused several groups of illustrious palmeirenses to question the arrival of Ferreira.

Especially because they expected a coach with a better resume.

The Portuguese never won any title.

And there is a serious relationship crisis with players on PAOK.

The Greek press questions the team’s football under his command.

He has an arrogant stance in the face of questions.

Like today, after the 0-0 draw with Granada, for the Europa League.

The question is whether it would be worth betting on Onion.

Since replacing the dismissed Vanderle Luxemburgo, Palmeiras beat Tigre by 5 to 0, by Atlético Goianiense, by 3 to 0, and today, 3 to 1, at Red Bull.

That is, 11 goals in favor and one against.

With the team playing as the board itself dreamed.

But negotiations with Abel Ferreira are well under way.

This Friday there must be a definition.

And the club can finally announce its foreign coach.

Replacing Andrey Lopes as an assistant.

The excitement passes away from Palestra Itália …

Bruno Lazaroni, from Botafogo, is the 14th coach fired in the Brasileirão

These were the details of the news Onion made Palmeiras to be Palmeiras. Abel Ferreira very close... for this day. We hope that we have succeeded by giving you the full details and information. To follow all our news, you can subscribe to the alerts system or to one of our different systems to provide you with all that is new.