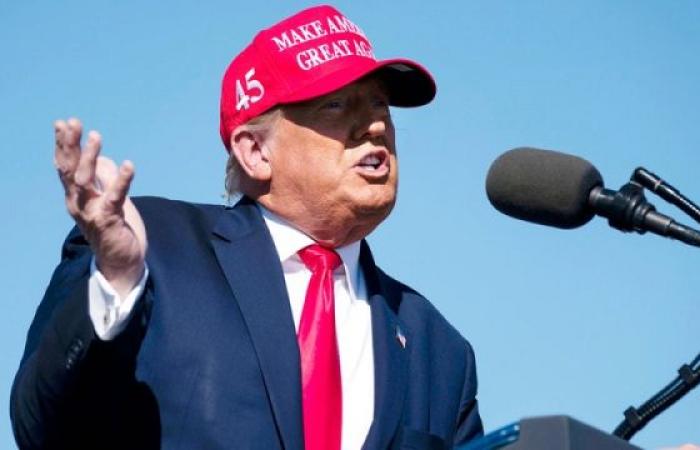 The chances of US President Donald Trump winning a second presidential term continue to decline, and with less than a week remaining until the presidential elections, scheduled for November 3, Trump is still nine percentage points behind his rival, the Democratic candidate, Joe Biden, at the national level, and no There are strong indications of any real move in either direction.

The American writer, Jonathan Bernstein, said in a report published by Bloomberg News that he stated, at the beginning of last week, that there is still enough time for major changes to occur in the competition between Trump and Biden, but this is largely unreal now.

He added that with the end of the debates, it is difficult to imagine anything that could lead to a shift by more than a percentage point or two, and Trump’s decline in spending is not only limited in recent days, compared to former Vice President Joe Biden, but the current rise in the number of HIV cases Coronavirus – which also affects the incumbent president very badly – is unlikely to help him either, nor is the small number of hesitant voters who have yet to make up their minds.

As analyst Nate Silver said: “We’ve sort of come to the point where the only way Trump can win is by a big ballot error, bigger than what happened in 2016 (or if the election was stolen in some way).”

The reason that Trump still has a real chance is that the electoral college in the United States, which actually determines who will win the presidency of the country, seems biased in favor of the Republicans this year, as it was in 2016, and perhaps a little more, and awarded the position (538) specialized in Polls and politics analyze Trump with a 4% chance of winning the most votes, and The Economist believes Biden will roughly do so. At least, that is the case if the polls are correct.

As it happened in 2016, the poll results in the final stage are likely to be wrong (meaning several percentage points different from the actual results) than the general average, this is not surprising, there may be two or three high-quality polls in critical states during the days. The next few, but there will be about six or more good public surveys, and lots of other useful polls as well.

“We can do the exercise itself and accurately calculate the direction of the electoral votes going in Wisconsin or Michigan,” says Bernstein, who taught political science at the University of Texas. Or perhaps Nevada or Minnesota, both of which were won by Democratic nominee Hillary Clinton in 2016, but Biden’s lead in opinion polls was greater than her lead at the time in those states, and while it is possible, of course, that mistakes would occur to turn those states in favor of Trump, this is not Increasingly likely ».

“How likely is a greater than usual error in the polls this time?” No one knows for sure, but if the pollsters know that there is a certain potential error, they will correct it. That is why I am somewhat skeptical that looking at the mistakes of 2016 or 2018 will tell us a lot about the current elections.

The main thing that makes such mistakes more likely this year is the Corona virus epidemic and the resulting changes in how citizens vote, as the number of voters who cast their ballots increases early compared to absentee or personal voting, and there is a difference this time, which is what It appears to be an unusually high turnout, and perhaps all of these things make it difficult to correctly estimate the pool of potential voters, which may cause greater errors than usual.

This situation may become worse due to mail delivery problems, or the “additional” efforts on the part of the Trump campaign to disrupt absentee ballot papers, or the current large increase in Corona virus infections may discourage citizens who plan to vote in person on Election Day.

And at the moment, if the opinion polls are accurate, or if Biden is doing a little better than what those polls say, then Trump is in a very deep problem, of course all of this is assuming a normal and fairly fair election, and Trump has threatened a lot otherwise. While saying (for example) that the final result should be counted on election day itself, despite centuries-old laws and practices that require ballot papers to be counted and counted over the course of the days following the election, or longer if necessary, and local officials will likely ignore Trump’s threats and the screening will continue as usual.

In the conclusion of his report, Bernstein asserted that “the accuracy and complete counting of all legitimate votes is more important than the speed of announcing the results, and if we are lucky and one of the candidates wins by a large margin, we will generally know who won the elections late Tuesday night.”

President Donald Trump’s best bet is to keep every state he won in the previous elections, with the exception of Michigan and Wisconsin, and to succeed in that he will have to win Pennsylvania, in which he currently trails by more than five percentage points, and this is not impossible, and the results will surely reveal a mistake in Polls are at least six points in more than one state, but this is unlikely to happen in Pennsylvania, which has taken so many surveys. And if the problem is in one state, then Trump is still losing, because he is currently losing (according to the New York Times indicators) in Arizona, Florida, Iowa, North Carolina, and possibly Georgia, so what Trump needs is that the public opinion polls are incorrect (in his favor). ), And that the Pennsylvania state polls are incorrect (in his favor) without those other states being in Joe Biden’s interest.

– Trump’s best bet is to keep every state he won in the previous election, except for Michigan and Wisconsin, and to succeed he would have to win Pennsylvania, where he is currently trailing by more than five percentage points, which is not impossible.

If the polls are accurate, or if Biden is doing a little better than what those polls say, then Trump is in very deep trouble.

These were the details of the news American writer Jonathan Bernstein: Trump may win the election – Politics... for this day. We hope that we have succeeded by giving you the full details and information. To follow all our news, you can subscribe to the alerts system or to one of our different systems to provide you with all that is new.