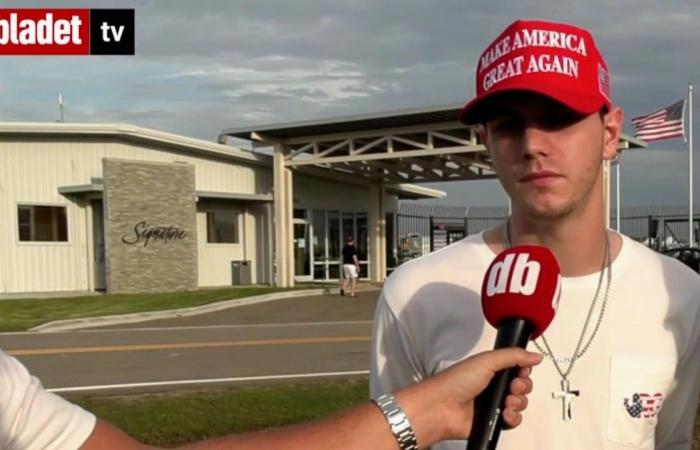 That’s what Trump supporter Luke Shelton told Dagbladet’s reporter in the USA, who is in place at the airport in Lafayette, North Carolina. Here, US President Donald Trump is scheduled to hold an election rally on Thursday.

However, this did not happen. The event had to be postponed due to tropical storm Zeta. Shelton, who had driven for one hour and 20 minutes to see the president, had to return home exhausted.

However, he understands that the meeting was canceled. According to a statement from the Trump campaign, reproduced by, among others, The Guardian, gusts of up to 80 kilometers per hour were forecast.

– I am a conservative, and this election meeting was close. Besides, this was the only day I had time off this week, so I decided to come, Shelton continues.

Trump won in North Carolina in 2016, but opinion polls now give Democrat challenger Joe Biden a narrow lead in the state, writes NTB.

According to the news agency AP, the meeting has been postponed until Monday. This was also confirmed by the president himself to an NBC correspondent

The president responded to my question on whether he can afford to postpone a NC rally tonight. “Very bad weather, the wind was terrible. We were forced to do it for safety reasons. But we're doing it, we're re-making it on Monday, big crowd.We're re-doing it on Monday” pic.twitter.com/g5kpCFgWE8

– Very bad weather, the wind is cruel. We had to do it (postpone, editor’s note) for security reasons. But we’re back on Monday. Large crowd. We are back on Monday, the president said as he left the place.

The event was scheduled to be today’s second election meeting for the incumbent president.

Ed Torhan lives in the area and had hoped to catch a glimpse of the president before the election. He assured Dagbladet’s reporter that he will be in place when the president hopefully shows up next Monday.

The president announced that he and the First Lady would instead visit the Fort Bragg military base in North Carolina on Thursday night. It also wrote The Guardian.

On Thursday night Norwegian time, Trump posted a number of messages on his Twitter page.

– If I do not sound like a typical Washington politician, it is because I am NOT a politician, he writes, among other things.

He also attached several photos from previous election events, and summarized the election as follows:

– This choice is a choice between THE AMERICAN DREAM and a SOCIALIST NIGHTMARE. Our opponent will turn the United States into Communist Cuba or Socialist Venezuela. As long as I am president, the United States will NEVER be a socialist country!

Several roads were flooded, according to AP News. Photos on social media also showed that a boat had hit land.

“Zeta” is hurricane number 27 in a historically busy hurricane season.

These were the details of the news US Election – Disappointed Trump fan: for this day. We hope that we have succeeded by giving you the full details and information. To follow all our news, you can subscribe to the alerts system or to one of our different systems to provide you with all that is new.