In light of the Nice events … experts call for an... 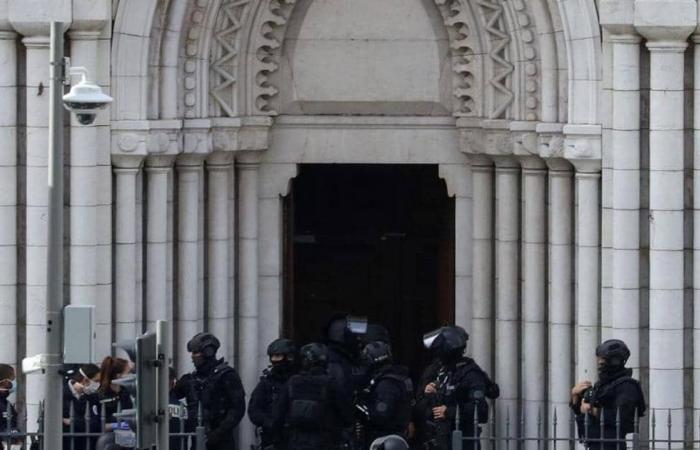 And Thursday morning, a city witnessed Nice In southern France, a terrorist incident in which 3 people were killed, including a woman who was beheaded, while others were stabbed inside a church, which French sources believed was a terrorist act.

And mid-October witnessed The French capital is Paris A teacher, Samuel Patti, was beheaded by a man of Chechen descent who said he wanted to punish the teacher for a show Cartoons For the Prophet Muhammad (peace and blessings be upon him) on the disciples.

Terrorist operations escalated in the name of Islam in France specifically, in conjunction with a Turkish-French economic dispute Libya وشرق Mediterranean sea This is what Turkey considers a threat to its ambitions in the wealth of the eastern Mediterranean and the wealth of southern Libya.

The two terrorist incidents came after the Turkish president’s accent escalated, Recep Tayyip ErdoganAnd the Qatari Al-Jazeera channel adopts a campaign against the French president Emmanuel Macron He described it as a war on Islam, which observers considered a political use of Macron’s statements in the wake of the Paris teacher accident.

Terrorist incidents reveal the extent of infiltration The terrorist Brotherhood organization To European societies with Turkish and Qatari sponsorship after exporting a false mental image of Islam and Muslims via the Qatari Al-Jazeera channel.

The experts said in exclusive statements to “Sky News Arabia” that this awakening must stem from Western and European societies, which contributed to embracing these groups within the framework of political use to repel the tide of communism on the one hand and as justifications for intervention in the Arab region on the other hand, which required European indulgence. With it, Qatar and Turkey used it to find pressure cards within Europe to achieve economic interests.

Speakers stressed to “Sky News Arabia” the need for this awakening to coincide with an Arab-Islamic path that adopts a revealing discourse to some countries in the Arab and Islamic region, which sponsored and financed these terrorist currents and their political and economic purposes from behind that.

Qatar and Turkey combine a strategic partnership in the field of The use of terror As a means of pressure to achieve political and economic gains, reports indicate that Qatar sponsors extremist groups with hidden funding under charitable organizations and societies.

In a previous report, a researcher at the American “Geatstone” Center for Studies and Research, Giulio Muott, warned that the Qatari regime is using the donation to mosques in France as a cover to finance terrorism.

The report confirmed that Country activity in France It raises concerns about the stability of European democracies and that over the past years Qatar has been the first supporter of the Muslim Brotherhood, Iran, ISIS, Al Qaeda members, Hamas, the Taliban and others.

Funds coming from Qatar finance the establishment of many major mosques in France, and the American Center’s report cited a former employee named Malek Al-Athamneh of the “Qatar Charity”, which is listed on terrorist lists in several Arab countries, as he said that the organization plays a major role in supporting and financing terrorist groups.

In the context, a report submitted by researcher Tim Collins to the British House of Lords revealed unlimited Qatari support for the Brotherhood, represented by pumping more than 125 million euros all over Europe from Qatar to Brotherhood institutions, and more than 18 million euros of the total amount went to Certain departments at the University of Oxford, pointing out that there are many Brotherhood organizations that enjoy Qatar’s financial support, without any restrictions, and this means that Western governments should review their relations with Doha.

Get out of hand

Libyan thinker Salah Al-Haddad, “a dissident member of the Shura Council of the International Brotherhood Organization,” believes that there is a dispersed European position in dealing with the terrorist Brotherhood organization and its derivatives.

He indicated in a special statement to “Sky News Arabia” that the stances of Western countries in dealing with these terrorist organizations are now not united and governed by interests, explaining that Britain’s position on the Brotherhood organization, for example, is completely different from that of France, stressing that this complicates the matter and makes some countries awaken. France is ineffective.

Al-Haddad added that as long as political Islam, headed by the Brotherhood, has been a spearhead used by Western powers against their enemies since the end of World War II, especially in confronting its former communist enemy, he pointed to the Western use of political Islam that turned it into a cancer in the European body and out of its control after its mission ended.

Salah Al-Haddad concluded his speech to “Sky News Arabia” by saying that what could change the rules of the game is the heavy focus of Arab and Islamic countries on the strategy of draining the Brotherhood’s financial sources in Europe, and the withdrawal of all kinds of direct and indirect financial support from all projects that have to do with these Groups.

Magic turns against the magician

Amr Farouk, the Egyptian researcher in the affairs of terrorist groups, agrees with this vision, confirming in a special statement to “Sky News Arabia” that some Western countries during the current stage would take precautionary measures against the Brotherhood and its institutions abroad and against extremist and religiously aggravating elements, especially after Recent events in French interior.

Farouk pointed out that many know that the West and its intelligence services have employed the Brotherhood and some of the movement’s and intellectual references of extremist currents with the aim of using them as pressure papers against Arab political regimes to achieve interests in the Arab region and the Middle East, which means that magic has turned against the magician.

Farouk suggested that the armed extremist currents would exploit this latest wave in favor of their hostility with the West in achieving terrorist operations through the so-called crocodile cells and lone wolves, in order for Western countries to suffer heavy losses, as well as attracting more enthusiastic and revolutionary youth under the banner of defending religion, Sharia and the Holy Prophet, prayers God be upon him.

Farouk explained that the process of including the Muslim Brotherhood on terrorist lists, the prosecution of a number of its leadership, the confiscation of their money and the restriction on their movements may be possible at the current stage, as a matter of flirting with the Western interior and the Christian right, in addition to the feeling of Western governments that their societies are threatened and witness a state of intended alienation through Building parallel segments of society that pursue extremist religious ideologies.

Farouk pointed out that Western governments and European decision-making circles have fully realized that the Brotherhood and the movement’s Islam currents in general have exploited the margin of freedoms in forming Islamic institutions and centers to control Western societies and change their hobby in line with the Muslim Brotherhood’s reference, from which the jihadist Salafi literature was launched, and there are dozens of documents. And the scheme that was seized talked about attempts to penetrate the West by various means.

Farouk said that the awakening of the decision-making circles in the West against the Brotherhood and the supporters of Salafi jihadism is very late for several reasons, including enabling these groups to address the collective mind of Arab and Western societies through effective media institutions, and their monopoly on religious discourse in the West, and the formation of the conscience and awareness of Arab and Islamic communities, as well as They controlled the pie of friendships and donations money, and the establishment of huge economic entities that were built over many years, and the building of schools and centers concerned with the affairs of these communities and their social, economic and political conditions as well.

Yemeni political analyst Adel Al-Ahmadi, head of the Nashwan Al-Hamiri Center for Studies and Media, believes that the issue of confronting terrorism by political Islam groups is subject to bargaining, which is delaying the elimination of this phenomenon.

He emphasized in a special statement to “Sky News Arabia” that the Western awakening against political Islam groups, which inflicted the Arab region and many countries in the region and the world with disasters and worked to distort the image of Islam, is an issue that gains more importance every day in light of successive developments, especially after the terrible exposure. For the slogans raised by these groups in more than one country, and their classification in lists of terrorism by many governments.

Al-Ahmadi pointed out that this issue is subject to bargaining because there are some Western governments that found, at a previous stage or still, with these groups a peg to achieve pressures or interests and interventions in the Arab region, but this paper loses its luster every day, and the West has to realize that the interest is to be aware of the danger Extremist ideas that offend Islam and its values ​​of justice and moderation before anything else.

These were the details of the news In light of the Nice events … experts call for an... for this day. We hope that we have succeeded by giving you the full details and information. To follow all our news, you can subscribe to the alerts system or to one of our different systems to provide you with all that is new.