Trump took focus away from terrorism and put it in China,... 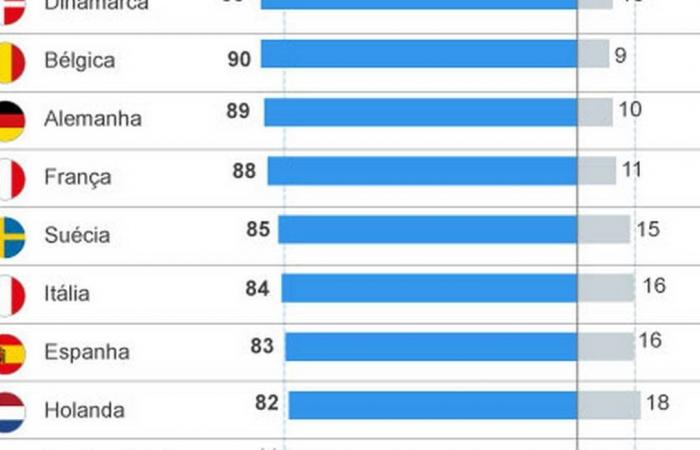 WASHINGTON – Ending “endless wars” was one of Donald Trump’s main electoral promises in 2016. Four years later, the United States finds itself in an existential crisis on the stage of the superpowers. Disputing with China the podium of post-Covid-19 geopolitics, the isolationism summed up in the Trumpist slogan “United States first” managed to prevent new wars, but it was not enough to bring back the soldiers sent to conflicts abroad. At the same time, the image of the country and its leader has deteriorated, eroding its “soft power”, one of the main instruments of American international leadership.

What Biden would do: If elected, Democrat would return diplomacy to allies and multilateralism, but would continue to confront China

Throughout the Trump administration, anti-China sentiment has consolidated as a bipartisan phenomenon in the U.S. The percentage of Americans with an unfavorable view of the Asian country shot from 47% in 2017 to 73%. Among them are Republicans and Democrats.

The movement followed the president’s aggressive rhetoric and his trade war. Despite little practical results – industrial jobs have not returned, agricultural product exports have not increased at the expected pace and the trade deficit has grown -, analysts agree that a new strategy for China was needed.

– Under Trump, there was a re-reading of the biggest threats the United States faces. The 2017 national security strategy moved away from terrorism as the focus of American attention and identified Russia and China, the competition between major powers, as the greatest threat to the United States – says Bonnie Glaser, China analyst at the Center for Strategic Studies and International (CSIS), which highlights the success of the American offensive in the technological sphere, as in the fight against Huawei.

Podcast: Does tension between the US and China represent a new cold war?

The pandemic intensified the attacks by the president, who came to refer to the coronavirus as “Chinese virus” and “plague of China”. Despite this, he failed to blame Xi Jinping for the more than 200,000 deaths in the United States. Only 21% of Americans believe the coronavirus situation in the country is not the fault of the government, according to the University of Chicago.

In terms of international image, 84% of those surveyed by the Pew Research Center in 13 countries allied to the US estimate that Washington has done a poor job in managing the outbreak. The same survey showed that Trump is the least reliable international leader, even less than Xi Jinping. Still, Harvard professor Joseph Nye, creator of the “soft power” concept, believes the United States has maintained its leadership position.

– The United States still spends three times more than China on military resources and has a global presence that China does not. The US economy, measured in terms of exchange, is still a third larger than China’s. And the ability of the U.S. to use its “soft power”, which is the ability to get what you want through attraction rather than coercion or payment, is still well ahead, despite having lessened under Trump.

Faithful to Trump:Conservative Christians establish themselves as one of the support pillars of the president

In terms of peace and security, the professor points out that Trump should receive credit for not having involved the U.S. in new wars, but says there was no consistency in the withdrawal of military personnel from Afghanistan, Iraq and Syria. Historian Andrew Bacevich agrees:

– In 2016, one of the most significant things Trump said about foreign policy was to denounce the post-9/11 wars. He promised to end “endless wars”. American forces are engaged in combat operations in several countries. He said he would end this commitment, but he did not. There are fewer military personnel in Afghanistan and Iraq, but the promise was not to cut back, but to end the wars and bring the soldiers home.

The complex relationship between Trump and Kim Jong-un ended up raising the status of the North Korean dictator, without guaranteeing the expected prize. North Korea continued to conduct missile and nuclear tests, two of them this year.

A clear hallmark of Trump’s diplomacy was his unconditional alliance with the Israeli hardliners and Sunni Gulf monarchies. This resulted in the abandonment of the nuclear agreement signed between the main global powers and Iran in 2015, which promised to end the isolation of the Islamic Republic. By ordering in January this year the assassination of General Qassem Soleimani, Trump risked starting a war. In Iran’s neutralization policy, he helped mediate agreements to normalize diplomatic relations between Israel and Bahrain, the United Arab Emirates and Sudan, setting aside the goal of nearly three decades of creating a Palestinian state.

In addition, the move of the embassy in Israel to Jerusalem took place, in a nod to both Prime Minister Benjamin Netanyahu and the president’s evangelical base in the USA.

The wall that disappeared

The promise to build a wall on the border with Mexico has been partially fulfilled, with 600 kilometers completed, according to the Border Protection Agency, but the stretch was not paid for by Mexico, as initially promised. A scandal of embezzlement of a kitty organized to build the wall, involving former Trump strategist Steve Bannon, exploded this election year. Today, the theme no longer appears in the campaign.

Still in the immigration policy, the president implemented the separation of families at the border, reduced the granting of refuge and limited the entry of citizens from Muslim countries. Even legal immigration has fallen, following decrees signed in the pandemic.

While intensifying competition with China, Trump bought fights with traditional allies in Europe, which he also imposed new trade tariffs on. The Republican demanded greater contributions to NATO (North Atlantic Treaty Organization) and had an especially difficult relationship with German Chancellor Angela Merkel, highlighting the gap between the traditional conservatism she represented and the new American right.

By ideological approximation, Tump formed a national-populist axis with countries like Poland, Hungary and Brazil by Jair Bolsonaro. The four took on manifestos for religious freedom, with an emphasis on Christianity, and against abortion. The relationship with Latin America was guided by the attempt, until now unsuccessful, to overthrow the Venezuelan Nicolás Maduro, which included sanctions on oil in the South American country.

Trump’s contempt for multilateralism was one of the main sources of the decline in U.S. prestige. He withdrew the country from the Paris Agreement and began to boycott the World Trade Organization Appeals Body. In the middle of a pandemic, he announced the departure of the World Health Organization, citing an alleged favoring China.

– The president changed American foreign policy by moving away from multilateral institutions and alliances that were a central part of that policy for 70 years – says Professor Nye, who recently launched the book “Does morality matter?” – Its US policy first and its narrow, transactional definition of national interest have undermined American soft power. But I think that if Trump is replaced, the U.S. has the ability to get him back.

These were the details of the news Trump took focus away from terrorism and put it in China,... for this day. We hope that we have succeeded by giving you the full details and information. To follow all our news, you can subscribe to the alerts system or to one of our different systems to provide you with all that is new.